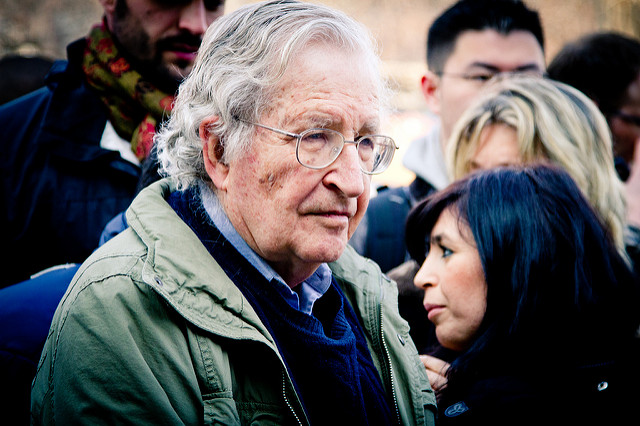 The essential element in the question, “How many times did you beat your wife?” is its presupposition that the husband beat his wife.

The expert on presupposition

Perhaps the best way to understand the ongoing debate surrounding Net Neutrality is to consider Noam Chomsky’s incisive observations on presupposition in his book The Common Good (1998).

The smart way to keep people passive and obedient is to strictly limit the spectrum of acceptable opinion, but allow very lively debate within that spectrum – even encourage the more critical and dissident views. That gives people the sense that there’s free thinking going on, while all the time the presuppositions of the system are being reinforced by the limits put on the range of the debate. (p43)

Millennials have been indoctrinated with the presuppositions of the Leftist narrative for two decades. Climate change is a classic example. The climate change argument presupposes the validity of its foundational premise of global warming. When it became abundantly clear that the earth’s temperature always fluctuates and was in fact cooling the global warming enthusiasts disingenuously changed the name of their campaign from “global warming” to “climate change” without ever accepting the scientific facts of the earth’s cooling. Why? Because global warming/climate change was never about the weather – it was always about the redistribution of wealth from rich industrialized countries to poorer non-industrialized countries in the form of taxes, fees, fines, and non-compliance penalties.

Even testimony by Patrick Moore former co-founder of Greenpeace before the Senate Environment and Public Works Committee, was not enough to convince millennials that global warming was a hoax. After all, they had accepted the presupposition of the argument and were ideologically convinced they were saving the planet.

Oppositional views on climate change have actually been litigated. The court case against Mark Steyn attempted to silence Steyn’s oppositional views on climate change. Steyn argued that if courts can silence free and open debate on scientific inquiry then freedom of speech is functionally dead. The pressure to conform in climate science is very real and the viciousness and hostility toward people who disagree is overwhelming. Anyone in the science community who challenges the “settled” science of climate change is considered unhinged or a dissident to be silenced – not a respected scientist or a climatologist to be heard. Climate science is functionally political science because redistribution of wealth is a political matter unrelated to weather.

So it is with Net Neutrality, FCC regulation 15-24 rescinded by FCC panel vote on 12.14.17. Millennials are now arguing passionately and persuasively to restore FCC 15-24 because they accept the suppositions of the argument that Net Neutrality is actually neutral. In fact, Net Neutrality, like climate change, is a partisan political weapon in the Leftist Culture War on America. Instead of redistribution of wealth, Net Neutrality seeks legalized censorship of the Internet by left-wing liberal Internet Content Providers. The social pressure to conform to the political narrative of Net Neutrality is as powerful and vicious as the social pressure to conform to climate change. This is how it works.

Net Neutrality was disingenuously introduced by Obama as a preventative measure to legally “protect” consumers from the “possibility” of Internet Service Providers (ISP) like Comcast, Verizon, and AT&T charging for Internet usage based on website content. Obama’s diversionary tactic deceitfully focused public attention and debate on the possibility of fees related to content and away from the real Title II provisions that bind Internet Service Providers (ISP) to Net Neutrality but exempt Internet Content Providers like Google, Facebook, Twitter. It was a classic indirect approach – the eighth of eight classical maneuvers in warfare – a diversionary tactic that focuses attention away from the essential play.

The Tech-Left was instrumental in the formulation of “Net Neutrality” and helped write the new rules. Not surprisingly, the consequence was that the Leftist content providers who currently dominate the Internet were “free to restrain content by censoring out all conservative and libertarian views at will, without so much as an explanation to anyone why the objectionable views were banned.” Net Neutrality awards the Leftist content providers precisely what Obama claimed Net Neutrality was “protecting” the country from. FCC 15-24 gifted the power of complete legal censorship to the political Left!

Net Neutrality was rightfully rescinded because it was written to silence free and open debate on the Internet. Whoever controls the information controls the public because without free speech there is no freedom. The millennials who naively continue to argue that Net Neutrality must be restored should examine the presuppositions that continue to inform their opinions and examine the legalized censorship that was always the essential play in FCC 15-24.

Just as the redistribution of wealth is the underbelly of Climate Change and its essential play, legalized censorship of the Internet is the underbelly of Net Neutrality and its essential play. Both policies disingenuously presented as lively debates but actually just reinforcing the presuppositions of the system. “How many times did you beat your wife?”

Our Crumbling Civilization and Immigrant Rights