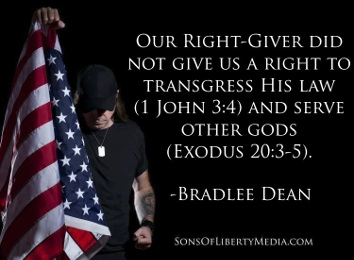 “Human law must rest its authority ultimately upon the authority of that law which is divine. . . . Far from being rivals or enemies, religion (Christian faith) and law are twin sisters, friends, and mutual assistants. Indeed, these two sciences run into each other.” So said James Wilson, U. S. Supreme Court Justice and Signer of the Constitution. CNN seem to have forgotten that.

Before we get to the pith and the marrow of this important topic of countering revisionist and CNN “Useful Idiot” Jake Tapper concerning a “religious test,” we must first understand that the term “religion” to the Forefathers always fell underneath the umbrella of the Christian faith (Lutheran, Catholic, Presbyterian, Episcopalian, Methodist, Wesleyan, Baptist etc… Not Hindu, Islam, Buddhist, etc.)

For example, if I were to go to India, I would expect them to rule according to their religious beliefs of Hinduism, and they do.

If I went to China, I would expect them to rule according to their religion of Buddhism, and they do.

If I went to a Muslim nation, I would expect that they would oppress through their religious totalitarian methods of Sharia law, and they do.

Furthermore, do you suppose for one minute that Barack Hussein Obama would have been elected president or given a pass to entertain America’s enemies within the people’s White House or to “fundamentally transform” America if he did not profess to be a Christian? No way.

So, in America, a Christian nation, it should come as no surprise to rule according to the Mosaic Institution, and so we do (Exodus 18:21).

As you can see, Jake Tapper questioned Roy Moore’s comment in which he stated that a “Muslim” should not be allowed to be a member of Congress, by asking why and under what Constitutional provision?

The effect: making some laws violable

What are you saying Jake, that some representatives are to uphold our enumerated Laws and some are okay to transgress and destroy? Is that somehow permissible?

This is what he is clearly stating. If there is no vow to serve “We the People” honestly, being held accountable before the One true God, then what will be the consequence?

If only Muslims were clever politically, they could take over the United States and replace its constitutional government with a caliphate. – Siraj Wahhaj

And let us with caution indulge the supposition that morality can be maintained without (Christian) religion. Whatever may be conceded to the influence of refined education on minds of peculiar structure, reason and experience both forbid us to expect that national morality can prevail in exclusion of religious (Christian) principle. – Charles Carrol, signer of the Declaration of Independence

Maybe, Muslim cheerleader Jake Tapper has mysteriously conjured up that those who mean to conquer and destroy this country have the freedom to do so. Apparently, Mr. Tapper does not realize that his freedoms come from one God and His Son, Jesus Christ (John 8:36; 2 Corinthians 3:17).

According to many ignorant Americans, Freedom of Religion now means whatever they want it to mean, and that to their own demise (Proverbs 26:27), even when it runs antithetical to our Constitutional Republic, which is based upon the Mosaic institution called Common Law.

Though they may be afforded asylum here, those individuals that come to America should be processed into American society, by being properly vetted to assimilate to our ways of life before they serve anybody.

First, it is clear that our rights come from the God of Abraham, Isaac, and Jacob.

Second, remember that our Right-Giver did not give us a right to transgress His law (1 John 3:4) and serve other gods (Exodus 20:3-5).

Furthermore, America is a self-professed Christian nation and to do otherwise will bring about war within the gates (Judges 5:8).

Jake Tapper then goes on to tell his guest, “You don’t actually have to swear in on a Christian Bible, You can swear in on anything really, I don’t know if you knew that?”

Did anything, or did someone bestow His blessing’s on this country? (Acts 14:17)

Just think of that.

This communicates to the people and those who represent them that we are not accountable nor obligated to uphold the laws of the Lawgiver, who saved us from our sins (Matthew 1:21) and maintains our freedoms, which feeds into a system of anarchy while giving power to the state.

Jake Tapper clearly has an evolutionary view of government.

Is this the example set before us by the American founders of this country? Absolutely not!

Here, in part, are some of the oaths of affirmation in America before one could serve.

I do profess faith in God the Father, and in Jesus Christ His only Son, and in the Holy Ghost, blessed forevermore…

I do believe in One God, the Creator and Governor of the universe, the rewarder of the good and the punisher of the wicked…

The Massachusetts Constitution is along the same lines.

No person who shall deny the being of God, or the truth of the {Christian} religion, or the divine authority whither of the Old or New Testaments, or who shall hold religious principles incompatible with the freedom and safety of the state, shall be capable of holding office, or place of trust or profit in the civil department, within the state.

Every state in our American union starts out acknowledging, guess who? You got it!

The Senators and Representatives before mentioned, and the members of the several state legislatures, and all executive and judicial officers, both of the United States and of the several states, shall be bound by oath or affirmation, to support this Constitution; but no religious test shall ever be required as a qualification to any office or public trust under the United States. – Article 6, Section 3, US Constitution

Let’s tear down (Judges 6:25-32) the revisionists and their purposefully distorted version of what our Founders have clearly bestowed upon us.

BTW, Wikipedia also has a No Religious Test Clause on their site in accordance with the lies of the American Civil Liberties Union. It stated:

This clause is cited by advocates of separation of church and state as an example of the “original intent” of the Framers of the Constitution to avoid any entanglement between church and state, or involving the government in any way as a determiner of religious beliefs or practices. This is significant because this clause represents the words of the original Framers, even prior to the Establishment Clause of the First Amendment.

Remember, founder of the ACLU Roger Baldwin said, “Communism is the goal.”

It comes to this: These media outlets, useful idiots, and organizations clearly fly in the face of everything that we are.