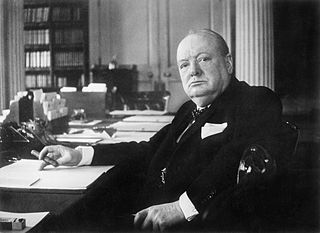 Since anti-Semitism is sweeping cross England and Europe, I want to quote some passages from England’s greatest statesman, Winston Churchill.

I propose to quote passages from Churchill’s official biographer Sir Martin Gilbert, Churchill & the Jews (2007). Bear in mind that Churchill was first and foremost a British statesman. One must therefore take his political duties into account in any assessment of his attitude toward Jews and Palestine.

Despite the anti-Zionist attitude of many of his Conservative Party colleagues, Churchill was steadfast in his support of the Jews, as Gilbert thoroughly documents. Churchill was a life-long friend of Chaim Weismann. That worthy, with David Ben-Gurion, regarded him as a champion of the Jewish cause. Of course, Churchill could not ignore Arab claims and pressure if only because millions of Muslims lived under British rule. Nevertheless, he opposed the 1939 White Paper, which curtailed Jewish immigration to Palestine when Jews were trying to escape Nazi Germany.

In March 1920, Churchill wrote, “We owe to the Jews … a system of ethics which, even if it were entirely separated from the supernatural, would be incomparably the most precious possession of mankind, worth in fact the fruits of all other wisdom and learning put together.”

Here is what he told the House of Commons about his visit to in Palestine, in 1921:

Anyone who has seen the work of the Jewish colonies which have been established during the last twenty or thirty years in Palestine will be struck by the enormous productive results which they had achieved.

He described how his hosts drove him

the most inhospitable soil, surrounded on every side by barrenness and the most miserable form of cultivation, into a fertile and thriving country estate, where the scanty soil gave place to good crops and good cultivation, and then to vineyards and finally to the most beautiful, luxurious orange groves. All created in twenty or thirty years by the exertions of the Jewish community who live there.

In 1929, armed Arabs attacked and murdered 133 unarmed Jews. In Jerusalem, they drove four thousand Jews from their homes. Reporters asked Churchill, then visiting the United States, whether this killing of Jews and destruction of Jewish property would affect Britain’s pledge to allow continued Jewish immigration. Churchill replied, the Arabs had no reason to be against the Jews.

The Jews [he explained] have developed the country, grown orchards and grain fields out of the desert, built schools and great buildings, constructed irrigation projects and water power houses and have made Palestine a much better place in which to live than it was before they came a few years ago. The Arabs are much better off now … To Jewish enterprise the Arab owes nearly everything he has. Fanaticism and a sort of envy have driven the Arab to violence …

On March 12, 1937, the year after the beginning of the Arab uprising in Palestine, Churchill was called to give evidence to the Peel Commission. They asked him more than 100 questions since he wrote the 1922 White Paper that enabled 300,000 Jews to enter Palestine.

The Commission asked whether this influx of Jews constituted a harsh injustice to the Palestinian Arabs. He replied: “Why is there harsh injustice done if people come in and make a livelihood for more and make the desert into palm groves and orange groves? Why is it injustice because there is more work and wealth for everybody. There is no injustice. The injustice is when those who live in the country leave it to be a desert for thousands of years.”

He rejected the contention that the Jews in Palestine constituted a foreign race. He pointed out it was the Arabs who had been the outsiders, the conquerors. “The [Jewish] population of Palestine,” he said, “was much greater when it was a Roman province.… When the Mohammedan upset occurred in world history and the great hordes of Islam swept over these places, they … smashed it all up. You have seen the terraces on the hills which used to be cultivated, [but] which under Arab rule have remained a desert.”

Envy is no excuse

The Commissioners asked Churchill whether the Arabs were right in saying the entry of the Jewish Home in Palestine prevented them from having self-governing institutions. He replied that

the Mandate limited the development of Arab self-governing institutions as long as they do not accept the spirit of the Balfour Declaration. The moment they accept that spirit, with all the pledges of their civil liberties, the question falls to the ground. [But the Arabs] resist and they do not want it.

If I were an Arab I should not like it, but it is for the good of the world that [Palestine] should be cultivated, and it will never be cultivated by the Arabs.

(Churchill said the Balfour Declaration refers to civil liberties and made no mention of national rights.)

One Peel Commission member complained that the Jewish Agency—set up in 1930—has its representative in London, whereas the Arabs feel left in the cold. Churchill replied: “It is a question of which civilization you prefer.”

A definitive answer to the they-were-there-first argument

might have some compunction if she felt she was downing the Arabs year after year when they wanted to remain in their own country.

Gilbert comments that Churchill rejected this line of reasoning. Churchill let Peel and others draw him into a more contentious discussion.Gilbert quotes Churchill:

Clearly, Churchill had no high opinion of Islam. Would that Israel had a fraction of a Churchill at the helm.☼

Churchill asked the Peel Commission which civilization they preferred. That assumes the Arabs even represent civilization. They are and always have been nomads at heart, and hit-and-run fighters. Major T. E. Lawrence advised them so effectively against the Turks for that very reason.

Israel making the deserts bloom stands today as the most remarkable feat of land reclamation in history. Furthermore, Israel neither grants nor recognizes any patents pertaining to agriculture. (Susan Marcus, tourguide and employee of the Israel Ministry of Tourism, told this to CNAV in 2011.) So all the world may copy Israel’s land-reclamation process and techniques. Even that does not satisfy the Arabs. This should say far more about the Arabs than about the Jews.

We can now know why Barack H. Obama removed the portrait bust of Churchill from the Oval Office. We also know why Donald J. Trump put it back. Trump then indicated a profound respect for Churchill. In announcing his plan to move the American Embassy, Trump does more than honor Churchill. He imitates him.