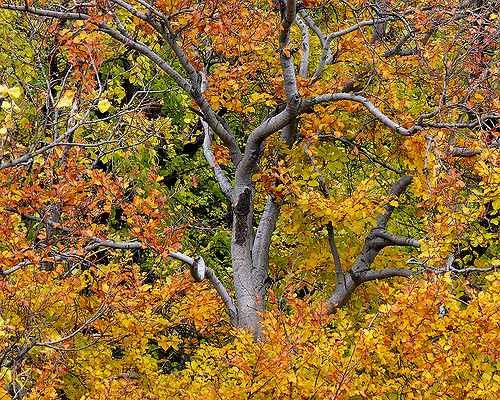 What is fractal wrongness? Let’s begin with a fractal. A fractal is a geometric pattern that repeats itself at every level of magnification. Mathematician Benoit Mandelbrot introduced fractal geometry in 1975 and defined a fractal as “a geometric shape that can be separated into parts, each of which is a reduced-scale version of the whole.” This means that a fractal is a self-similar never-ending pattern that repeats itself at different scales.

The famous Menger sponge is a fractal in math. Fractals in nature are trees, rivers, lightning bolts, and crystals. Russian nesting dolls are fractals. In computer science fractals are images that are the same at any level of scale which means that it is impossible to determine how much the image is zoomed by simply looking at it.

Fractal wrongness – definition from the Left

Fractal wrongness is the state of being wrong at every conceivable scale of resolution – the person’s entire worldview is wrong. The political Left has decided that anyone who disagrees with their platform of political correctness, moral relativism, and historical revisionism is fractally wrong. Fractal wrongness explains why the Left views the entire worldview of conservatives as wrong, deplorable, and contemptible.

Leftism, like any orthodoxy, has embraced its tenets with religious zealotry and a tyrannical demand for conformity that ignores obvious contradictions in its own narrative. Leftists, who pride themselves on being tolerant, are hypocritically intolerant of anyone who embraces a world view that differs from their own. Leftist faux tolerance only tolerates those who look different – it does not tolerate those who think differently. This presents a philosophical inconsistency that Leftism solves with Leftist Newspeak, the official language of the Left.

Barack Obama deliberately transformed standard English from Oldspeak to Newspeak and made Leftist Newspeak the official language in America during his eight year anti-American, pro-Muslim, pro-socialist tenure. The years of Obama’s administration were the years of language ambiguity. Americans are still bewildered by the use of language that no longer means what it used to mean. Leftist “tolerance” means intolerance because it does not tolerate differing ideas. Leftist “free speech” means hate speech because it does not tolerate opposition speech.

The confusion, divisiveness, and chaos created by ambiguous Leftist Newspeak is itself a fractal.

Let’s review. Fractals are self-similar complex patterns that are created by repeating a simple process over and over in an ongoing feedback loop. Self-similarity is the essence of fractals and the foundation of Ben Rhodes’ infamous echo chamber used to market Obama’s anti-American pro-Muslim Iran deal. The mainstream media deliberately advanced Obama’s deceitful deal in a never-ending pattern that repeated itself on television, radio and the Internet in an ongoing feedback loop. Obama’s Leftist echo chamber is a fractal in politics.

The divisiveness and bifurcation of America along political lines has been advocated by Obama’s fractal socialist politics and the insistence that any opposition to his Leftist narrative is fractally wrong. The irony, of course, is that acceptance of the Leftist narrative requires acceptance of the presuppositions of Leftist Newspeak – the language of opposites. This is how it works.

Obama’s campaign promise for hope and change was not spoken in the familiar language of Oldspeak understood to mean the American dream. Obama was speaking Leftist Newspeak – the language of opposites. Obama’s hope and change was Newspeak for the radical socialism codified in Saul Alinsky’s Rules for Radicals. Obama’s Leftist intention to destroy the capitalist infrastructure of American democracy and replace it with socialism requires acceptance of the Leftist assumption that the current capitalist infrastructure of the Constitution/democracy needs to be replaced.

Leftist socialism has rejected the authority of traditional Judeo-Christian beliefs and substituted its own political ideology as the new religion and source of authority for millennials in America.

Once Leftism was embraced as a religious ideology there was no longer any requirement for facts or objective reality because religion is faith based and not discredited by factual inconsistencies, glaring ambiguities, or the absence of verifiable proof. Leftism had freed itself from the confines of rational scrutiny and could unapologetically proselytize its tenets of political correctness, moral relativism, and historical revisionism.

Leftism is a religion disguised as a socio-political movement. Islam is a socio-political movement disguised as a religion. Both are tyrannical totalitarian movements demanding cultish conformity to their tenets. Both are using the language of contronyms to solidify their base and confuse the opposition. Both are determined to destroy America from within and take control of the country.

The pluralism envisioned by our Founding Fathers embraced differing thoughts, ideas, and behaviors within the legal confines and freedoms guaranteed by the Constitution. American pluralism did not embrace the fractal wrongness of Leftist socialism, Islamic supremacism, or any other competing ideology designed to destroy America from within.

Leftist Newspeak and Islamic taqiyyah are political attempts to disguise the seditious Leftist/Islamist goal of overthrowing Constitutionally elected President Donald Trump. President Trump is very aware of both deceitful languages and intentionally uses his Twitter account to bypass the mainstream media and speak directly to America in the clarity of Oldspeak. President Trump is the target of vicious personal attacks for using Twitter because the frantic Leftist mainstream media is no longer able to control the political narrative using its preferred Leftist Newspeak.

America rejected the fractal wrongness of supremacist ideologies 241 years ago. We are the United States of America bound by the ideals of liberty and justice for all – the fractal rightness of the American dream. We must recommit ourselves to the ideology of one nation, indivisible, with liberty and justice for all. We must reject the languages of contronyms and recommit ourselves to Oldspeak so that we can understand each other and openly debate any and all ideas freely and without fear of reprisal particularly on college campuses. Let us remember our roots and remain the land of the free and the home of the brave.

War in the classroom

Separation of religion and politics