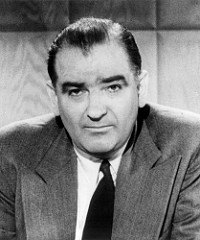 War makes strange bedfellows. The United States and Russia were allied against Nazi Germany in WWII until they weren’t. The alliance continued until it succeeded in defeating Nazi Germany. Then the diametrically opposed economic and political ideologies of Russian communism and American capitalism reverted the countries to enmity again.

McCarthy and the Cold War

The convenient ideological “My enemy’s enemy is my friend” alliance collapsed. The Cold War between Russia and the United States then began.

The Cold War lasted until the fall of the Berlin Wall in 1989 and the collapse of the Soviet Union in 1991. The Cold War was an ideological war between Marxist-Leninist Russia (collectivism) and the capitalist republic infrastructure of the United States. Today’s Culture War is also an ideological war – this time between the globalist (collectivist) initiative to internationalize the world under a New World Order and the capitalist republic infrastructure of a sovereign United States of America.

Joseph McCarthy was the US Senator from Wisconsin from 1947-1957 during the height of the Cold War. Suspicions about the threat of Communism and its Marxist-Leninist goals were then legitimate concerns. What began as an appropriate investigation of Communist infiltration into American government devolved into a lawless boundaryless witch hunt based on innuendo not facts.

McCarthy’s failure was that he stopped concerning himself with what the person had actually done and began focusing on who that person was – his beliefs and associations. McCarthyism became synonymous with character assassination.

It was not illegal to be a Communist in America in the 1950s. It was illegal to foment the overthrow of the government. Communists who had infiltrated our government and actively sought to destroy our republic and replace American capitalism with Russian communism were enemies of the state.

Mueller and the Culture War

Similarly, it is not illegal to be a globalist in America today but it is illegal to foment the overthrow of the government. So, globalists who actively seek to destroy our republic and replace the US Constitution with internationalized one-world government are enemies of the state.

Today’s Culture War has targeted President Donald J. Trump as the enemy of its globalist goal of internationalizing the world into a New World Order of one-world government ruled by its own elite. The leftist Democrat Party has entered into an alliance with globalists and Islamists whose shared goal is to destroy America from within.

Mueller’s “investigation” has abandoned all semblance of lawful propriety. It has devolved into the same sort of witch hunt lead by Joe McCarthy based on innuendo instead of facts that focuses on the who of behavior while ignoring the what of behavior. The infrastructure of Muellerism is the same innuendo and character assassination McCarthyism utilized. Both bullying their prey with smear campaigns, unethical tactics, unfounded accusations repeated incessantly by the colluding mainstream media. This is how it works.

In the 1950s the Culture War was an ideological battle between American capitalism and Russian communism. Today’s Culture War is an ideological battle between American nationalism and international globalism. The traditional American two-party system of Republicans vs Democrats no longer describes two opposing American ideologies. The two-party system of today is more accurately described as Nationalism (American sovereignty) vs Globalism (internalized New World Order) regardless of party affiliation.

Joe McCarthy lived during a time of American nationalism that was threatened by external collectivism (communism) infiltrating the country. Robert Mueller lives in a time of American nationalism threatened by internal collectivism (globalism) existing within the country. The deliberate effort at character assassination of duly elected President Donald Trump by globalist Democrats and globalist Republicans to overthrow the country is a bipartisan ideological effort. Why?

Another alliance of convenience: Islamism and globalism

The Leftists consider the Islamists useful idiots who will generate enough social chaos for the left to institute Martial Law and nationalize the police force and then socialize America. The Islamists consider the Leftists useful idiots in their campaign to infiltrate American politics and replace the Constitution with sharia law. The globalist elite consider both groups useful idiots who will together provide the social chaos necessary for citizens to willingly surrender their civil liberties for safety. That is the required tipping point for Globalist one-world government to become reality.

Here is the problem. The political will to power of the Leftists the Islamists and the globalist elite is a no holds barred contest. In McCarthy’s day when his goons threw manure against the wall to see what would stick it just smelled up the room and his victims were doomed. When Mueller’s goons threw manure against the wall, it held DNA evidence. The Mueller witch hunt left DNA traces of the CIA, FBI, Clapper, Brennan, Clinton, Comey, Rosenstein, Strzok, Paige, Lynch, Mueller himself, and of course the most foul of all – Barack Hussein Obama.

There has never been a more odious president in American history than Barack Hussein Obama who politicized and weaponized every government agency to use against his political enemies in the service of the Leftist/Islamist/Globalist alliance.