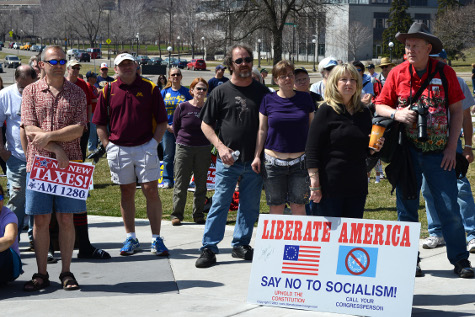 Intermarriage is not always a matter of race or religion. Sometimes it is a matter of politics. In 2008 Barack Hussein Obama officiated at the wedding of the Democrat party and Socialism. In this case the bride and groom came from very different family backgrounds with diametrically opposed world views and political perspectives.

The bride’s family, Constitution, was 242 years old and deeply committed to individualism, equality, liberty, and limited powers of government. The groom’s family, Socialism, came to America in 1877 deeply committed to collectivism and centralized government powers. The young lovers ignored the differences and their families’ objections to the marriage in their determination to make their union work for themselves and their children. What happened?

The marriage enjoyed the sweetness of honeymoon oblivion for awhile but soon it became apparent to both bride and groom that the Constitution and Socialism families divided along foundational lines and compromise was not an option. As with so many racial and religious intermarriages the problems did not become apparent until the children were born. The husband and wife began to argue about what to teach the children.

The husband argued the superiority of his Socialism family tradition of collectivism to govern their family publicly and privately. He extolled the values of dependence, eternal childhood, and cradle-to-grave government control. The wife insisted that her Constitution family values of individual liberty, equality, and personal responsibility were better suited to govern their family. The arguments grew more heated and the husband and wife decided to seek professional counseling. They went back to the spiritual adviser who married them – Barack Hussein Obama (BHO).

The husband and wife entered the counseling office with optimism and confidence that their officiant could help them sort it out. After all, they had chosen BHO to marry them because Obama said he taught Constitutional law and also studied the great socialist Saul Alinsky, author of Rules for Radicals. Obama listened to the husband and wife patiently.

The husband spoke of the beauty of collectivism and the righteousness of Socialism’s social justice and income equality. He rhapsodized about a parent-like government caring and controlling the population like parents with their children. The bride spoke of the beauty of her Constitution’s freedoms, individualism, and how the meritocracy incentivized upward mobility, and individuals being able to decide for themselves how to live their own lives.

Living in the past?

Obama stroked his chin and spoke slowly and quietly, “You must not dwell in the past my dear. You are the pioneers and the anointed children of my new America. You are the leaders of the new who must reject the old.”

First he spoke to the wife, “It is true that the old America rested on your family Constitution and its foundation of individual freedom and liberty. But that was the old America and this is the new America. The new America is reflected in the new Democrat party. We have merged the collectivism of Socialism with Liberalism to form a more perfect union.”

The wife erupted, “A more perfect union? How is denying my family Constitution and embracing my husband’s collectivism fair or a more perfect union? The unproductive citizens are rewarded at the expense of the productive citizens. The government controls every aspect of our lives and we have no individual liberty, freedom, protection, or private property! We will be forever children!”

Obama answered without pause, “Your intermarried family is the blueprint for a universal world of peace and harmony my dear. We are transforming your generation and your children’s generation into a new Socialist America in preparation for the future.”

“What future?” the wife demanded.

Obama continued, “The New World Order my dear. Globalism will be the new family name that the world will share. It may require violence and anarchy in the beginning. But don’t worry – the end will justify the means – you will see. Socialism will be followed by the universal family of Globalism.”

The husband interrupted saying, “That is what I keep telling her but she does not understand the beauty of eternal childhood and the collectivist socialist traditions, or universal planetary governance!”

In that office, in that moment the wife understood that compromise is not always an option. Sometimes divorce is necessary. The wife realized that many family conflicts don’t end until one party submits and the other emerges dominant. That was not an acceptable conflict resolution for her.

The wife understood that the liberalism of the old Democrat party had submitted to the authoritarian supremacist doctrine of Socialism under their spiritual leader Barack Obama. Just as her Constitution family values had been eroded little by little during her marriage she realized that the Democrat party her family had once been a part of no longer existed.

The new Democrat party was tyrannical and supremacist in its demands for conformity. It followed the collectivist tenets of Socialism and no longer respected the Constitution. The radical leftist party had decided that it preferred collectivism to the Constitution and it demanded that activist judges be allowed to reinterpret and rewrite the Constitution in preparation for internationalized one world government.

This intermarriage has failed

Intermarriage is not always a matter of race or religion. Sometimes it is a matter of politics. For centuries European monarchies intermarried their children to protect and expand their kingdoms. Sometimes these political marriages of convenience succeeded and sometimes they failed.

The intermarriage of the Constitution and Socialism in America is a complete failure. If America submits to Socialism it will end with total internationalized control provided by one world government courtesy of the corrupt United Nations. Every freedom-loving American must vote in the November midterm elections and pull the lever ONLY for candidates who are committed to the Constitution and to upholding the rule of law.

It is time for Americans to wake up, stand up, #Walkaway from the new Democrat [Socialist] Party. The right to private property is foundational to freedom. It is time for divorce American style – vote to preserve individual freedom, personal autonomy, national sovereignty, and American independence!