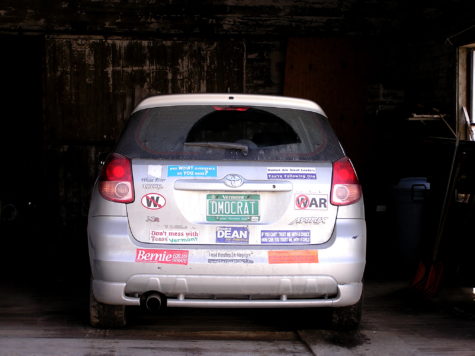 Hello, this is Darrell Castle with today’s Castle Report. Today I will be talking about the leftward shift of the Democrat Party, and the effect that shift is having on politics in America. Yes, the Democrat Party is being changed primarily by the demographic changes the Democrat Party has forced on the country over several decades. The old policy of gradualism favored by Democrats, whereby they ruin the country gradually so we don’t notice, is unacceptable to the new Democrats. Instead they want to ruin it completely and all at once.

In New York’s 14th Congressional District’s Democrat primary, ten term incumbent Joe Crowley was defeated soundly by Alexandria Ocasio-Cortez, a self-proclaimed working class girl from the Bronx. It turns out though, that she’s not from the Bronx at all but from Westchester County, New York, one of the ten wealthiest counties in the United States. Westchester County is where Arkansas natives Bill and Hillary Clinton now call home. Ms. Ocasio-Cortez, at least currently, does live in the Bronx district she seeks to represent. She has what the new Democrats seem to want; she is young, 28 I think, attractive, Hispanic and very ambitious.

Her victory in this fall’s election is a foregone conclusion since her district is 70% non-white with the largest percentage being Hispanic. That is the interesting thing about her win, and why I say that Democrats are finally starting to let us see who they really are. She made the statement after the election that” this is no longer the country for old white men”, and perhaps she’s right, but as we’ll see in a few minutes it’s no longer the country for old white women either.

The young Democrats are taking off the gloves and they do not even seem embarrassed by their overt racist appeal which, as I said, has been made possible by decades of work by old, white Democrats who wanted power for themselves.

She says that once in Congress she hopes to achieve a lot of things for her people. Free health care through expansion of Medicare, free education, and my favorite guaranteed jobs, are all on her list, but what is not on her list is how these things will be paid for. She says she’s a socialist but when questioned she reveals that she really doesn’t understand what that means. She seems to think it means that as if by magic everything will suddenly be free and her new government will reverse the laws of economics.

The racist appeal of her campaign has spread across the country as she is portrayed now as a “rising star” in the new unmasked Democrat Party. Old white Democrats, such as Chuck Schumer, introduce her as the future of the Democrat Party. No country for old white men, or apparently old white women either, or at least that seems to be the message sent to Senator Diane Feinstein in California by the Democrat Party’s State Committee. Senator Feinstein, a spry 85 years old, is seeking her 5th term in the U.S. Senate, which would give her 30 years in the Senate and make her 91 years old when she finishes her 5th term.

However, the California Democrat Party’s State Committee Board rejected and refused to endorse her. When the 330 member Board voted recently she got only 7% of the vote while her 51 year old Hispanic opponent, Kevin De Leon got 65% of the vote. Interestingly 28% voted to not vote or to give no endorsement, which tells me that they did not want to go on record as upsetting the establishment but they no longer want the old white woman in office.

The Democrat establishment made the monster that eats them

Now I ask you folks; did you think you would ever see the day when Diane Feinstein was just too conservative? She’s not liberal enough for the new Democrats and she’s too old and, most importantly, too white. The Senator is not without resources though, as she has accumulated a $7 million dollar campaign fund, which is reportedly 10 times that of her opponent so we’ll see what the voters of California have to say. I didn’t think I would ever see the day when I would actually want her to win but here it is.

The ironic thing is that both Joe Crowley and Senator Feinstein are the very apex of establishment in the Democrat Party and both have spent their long political careers making what happened to them inevitable. Before she was in the Senate, Diane Feinstein was mayor of San Francisco and has been at the top of California politics for a long time. Joe Crowley was fourth on the Democrat leadership list in the House but both of them worked for relatively open borders and the demographic changes that made them too white and too old to be elected by the new Democrats.

The Democrats are now the party of completely open borders, as evidenced by the Abolish ICE movement, and by the statements of the Deputy Chair of the Democratic National Committee, Keith Ellison of Minnesota. Congressman Ellison was, I believe, the first person in Congress to take his oath of office on the Koran. He is for completely open borders and doesn’t hide that fact. He says borders are racist because they deny opportunity. I wonder if he has locks on his doors thus denying opportunity to burglars.

Open borders would be destructive of the economic opportunities, especially for minorities or for anyone trying to advance into the middle class. Massive immigration destroys upward mobility for working class people but no one in the Democrat Party seems to understand that or to care. From Ms. Ocasio-Cortez’s statements about it, it’s easy to tell that she obviously doesn’t understand it, but she knows instinctively that more immigration is more controlled power for people like her.

Back in California, Senator Feinstein’s opponent, Mr. De Leon, campaigns for the abolishment of ICE and for open borders. He is really arguing for the end of the American Nation-State, but at least he has a clever sense of humor about it. He has fund raisers that he calls “Get Rid of ICE Cream Socials”. So, a very clever way to state that the Democratic Party is the party of open borders, and we should never let that fact be forgotten.

Invasion and conquest always has help on the inside by those being conquered. This invasion and conquering of the United States and of Western Civilization would not be possible without the full aid and comfort of the Democrat Party. It’s easy to find You Tube videos of Chuck Schumer from 2009 and 2010 saying that he is adamantly opposed to illegal immigration but all of a sudden he sees it differently. The power base is shifting and he needs those in the third world to help him build a permanent power base of good Democrats.

My hope is that he and other old line Democrats will be able to see and listen to the new Democrats and observe that they are openly racist, and that their power base is not going to include him. Schumer is digging his own political grave, as well as also digging graves for the rest of us. It’s time for the Democrats to stop digging and start thinking of the future that their children and grandchildren will endure for the rest of their lives. I’m talking about the few Democrats who actually have the mental capacity to understand what I’m saying. I recognize that the vast majority of them will be happy when they and their progeny are dispossessed in their own lands.

Can Trump save the country?

Finally folks, we are often told that as California goes, so goes the rest of the country. God willing it won’t go California’s way this time, and the Republic will be saved. We need a hero. We need Charles Martel or Holger Danske to lead us to victory, but is our golden haired leader that man?

Time will tell folks, but I pray that he is.

Dangerous criminals? That means you!

Trump speaks the truth – in public