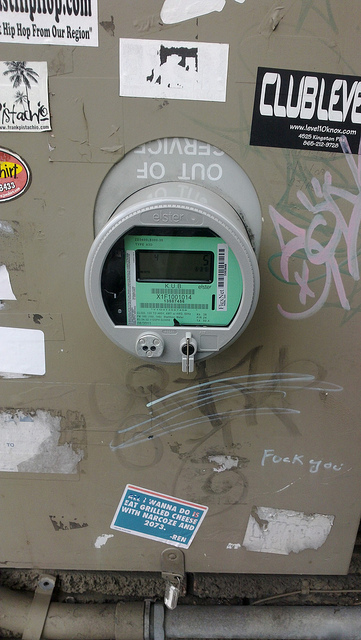 So they don’t need to send a meter reader to your house. They can issue your bill, so they say, much faster. They can even send you graphics on when you use the most electricity, and how much it costs at different times a day. So you can plan when to do your washload, or bake something ahead of time. That sounds good at first. But in fact smart meters serve the power company, and the government, as instruments of rationing. Smart meters can not only read your electric usage, but can also cut you off. And that’s the idea.

How do smart meters work?

Apologists for smart meters describe them this way. They say up-front that smart meters can cut you off from the front office. Besides that, smart meters “read” your usage every day, and indeed every hour. Obviously they know how that sounds, which is: not good. So they blandish you with assurances that the power company will respect your privacy. Furthermore, they say you have the option of taking part in managing electricity use in your home.

The smart meter takes frequent readings of your energy usage, but it only measures the electricity used in your household, it does not control it. If you have opted in to a program such as a PeakRewards program, your smart meter will not change how this program operates. The utility will continue to cycle air conditioner compressors and hot water heaters on and off as needed during peak usage times, the same as when you first signed on to this program.

In the future, the smart meters will enable utilities to remotely turn service on and off at customer premises. This feature will [kick in] when customers move out of their current homes and start service elsewhere. This cost effective feature eliminates the need for a utility field visit when customers move or start service. The remote connect feature will also enable the utility to place customers back into service more expeditiously.

What that really means

First, it means more unemployment. The power company will fire all their meter readers. Nor will they hire qualified electricians to install smart meters. A typical installer will train for merely two weeks.

Joseph R. Mercola, D.O., has the most comprehensive treatment of smart meters and the dangers they pose. The health hazard concerns him most. Smart meters transmit at a radio frequency that does cause health issues. People have the blood test results to prove this! Besides the health hazard, Mercola notes a fire hazard. So have many other commentators. Tellingly, the American Cancer Society hedge their bet on whether smart meters are safe or dangerous. Elsewhere, one apologist for smart meters drew scathing comments from readers who know better.

The government has pushed smart meters since the Obama administration, and especially in Governor Jerry Brown’s California. Results have come in, and they belie the blandishments. The apologists said smart meters would save customers money. They haven’t. The Memphis Light, Gas and Water Division (MLGW) admits they have cut more people off than ever. (Source: The Commercial Appeal.) And in general, electric bills have risen, not fallen, with smart meter use. Are the power companies falsifying their reports and backing up their lies with remote cutoffs? Or do the smart meters themselves consume energy while measuring usage? Until someone sues a power company and moves for pre-trial discovery, no one else can know.

Rationing: the fix is in

The power companies and the government always intended to use smart meters to ration power. Two documents, one from IBM and the other from DOE, make that plain. IBM and the Energy Department speak of “demand-side management.” That includes pricing electric power higher during the daytime or “peak load” period. And what generates the “peak load”? Fossil fuels. Power plants that burn coal, oil, and natural gas, can scale up or down more quickly. The base load in America is nuclear. Nuclear power plants can’t “scale up.” (No one in North America has yet installed Pebble Bed Modular Reactors, which could “scale up” on demand.) But nuclear energy does cost less per kilowatt-hour than does energy from fossil fuels. So such “peak pricing” might make sense, if cost savings were the true goal.

But that’s not all. IBM itself boasts of reaching new service level agreements with residential customers. These agreements will let the power company directly turn major appliances on or off. Who says smart meters can’t control how you use the juice? That’s another lie!

A large cadre of “useful idiots” are already shouting at people to stop using fossil fuels now. Today. This instant. These same activists do not want nuclear energy. They will permit only three sources of energy in the new “green future”: ground-based solar, wind, and geothermal. Those three sources alone cannot replace fossil fuels and certainly cannot replace nuclear energy. A better battery, or fuel cells, can make ground-based solar and wind less intermittent. But they cannot make them sufficient.

Enter smart meters. With smart meters, if demand exceeds supply, no problem! Cut people off! One can even play favorites and leave the lights on for the well-connected. In this context, the connection would be as much political as technical. For the rest of us, it’s curfew, candlelight and curtailment.

Phases of the rationing regime

Naturally a government does not impose such a rationing regime in one phase. Smart meters constitute Phase One, because they are more than meters. They are, in fact, switches that the company, or government, can throw from where they sit, hundreds of miles away. (In California, people who refuse smart meters must pay opt-out fees. But the utility cannot enforce them nearly as easily as they thought. Ha, ha. Remember that in your planning.)

Phase One-and-a-half will likely involve cutting off entire neighborhoods until everyone agrees to install smart meters.

Phase Two involves raising rates, and maybe misreporting usage, to encourage “conservation.” That includes dishwashers that won’t dry your dishes. It also includes “smart” major appliances the company can turn on and off from where they sit.

And for Phase Three, the Gendarmerie climatique des Nations Unies (GCNNUU), or the United Nations Climate Force (UNCliFor), moves out in force. They march to all fossil-fuel-burning power plants. They have simple orders: shut them down. When that happens, the only thing keeping the grid from collapsing will be smart meters cutting people off. Then the “Smart Grid” will bring people back on-line, if they have the connections. Again, we deal here with political connections. Those without such connections will learn a new meaning of “disenfranchisement.”

Stopping and confiscating all non-electric motor cars will happen in parallel with this operation. (Again, those with the connections will keep their cars.) Those electric cars will have a limited range. Smart meters will see to that.

How to stop this

First, when the local power company trumpets their installation of smart meters in your neighborhood, protest and refuse. Let them know you mean to refuse as soon as the letter lands in your mailbox.

Second, arm yourself. The Second Amendment in fact gives you the absolute right to arm yourself at least as well as, if not better than, does an infantry soldier. You will need small arms to resist UNCliFor, because, like a gendarmerie, UNCliFor will be a paramilitary force. (You will not—yet—find designations like UNCliFor or GCNNUU in any United Nations document. They won’t spring that on the general public until they are ready to recruit, train, organize, equip, and deploy.)

As an aside: we can only assume that the Deep State fears The Hon. Brett Kavanaugh as a threat to this plan. The first lawsuit to discover why households with smart meters pay more, not less, will reach the Supreme Court. So, too, will more lawsuits to overturn bans on “assault weapons” and other small arms. The Deep State does not want a Justice Brett Kavanaugh to write or join in opinions on such cases. Which is another reason to call your Senators and tell them to vote to confirm his appointment.

Video courtesy In Power Movement. To support their efforts, follow their link. For information on the sequel, visit IndieGoGo. CNAV has no content- or revenue-sharing agreement with either firm.

Kavanaugh for SCOTUS: an open letter