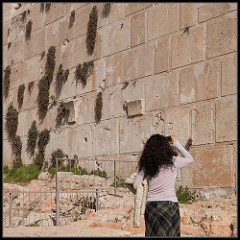 Bus load after bus load brought Jewish spiritual tourists into Hebron-Kiryat Arba1 (Hebron) last Friday afternoon. You could feel the electricity, this Shabbat was going to be different. A quiet excitement filled the air. Soon tents were sprouting up on the lawns between buildings, like mushrooms after a good rain. Homes were filled with guests. Schools and gymnasiums turned into makeshift hostels. Separate sleeping arrangements were set up for yeshiva guys and seminary girls, sleeping on mattresses on the floor. Cars at first filled the parking lots, then overflowed into double parking, and finally onto the sidewalks.

In the end, over 40,000 Jews voted with their feet, coming out to Hebron-Kiryat Arba in Judea, more than quadrupling the Jewish population, including Jerusalem Affairs Minister Ze’ev Elkin and Knesset Speaker Yuli Edelstein, who was also acting prime minister, while Netanyahu spent the weekend in Europe. For more than a day, Hebron-Kiryat Arba became a city of over 50,000 strong.

What caused this vast human migration? The annual Shabbat Hevron! Jews came to connect to their forefathers and foremothers, their roots and the roots of the Davidic kingdom.

The fight over the Cave of Machpelah

This past Sabbath Torah reading, was Parshat Chayei Sarah (the life of Sarah). In it, we learn that the matriarch Sarah, has died in Kiryat Arba, which is Hebron (Genesis 23:2). Then, Abraham buys a burial place for his dear wife Sarah and buries her there (Genesis 23:16-20). That place is called today, the Tomb or Cave of the Patriarchs, or Ma’arat HaMachpelah. One of the most fought over holy sites in the world, and the second holiest place in Judaism, after the Temple Mount in Jerusalem.

But, why should it be fought over? The Bible clearly tells everyone, that Abraham purchased it. The cave and surrounding field, became the Jewish homestead and family burial plot. Abraham’s purchase included the land around the cave, and we find all the patriarchs living in Hebron. Abraham and Sarah are buried there. So, too are Isaac, Rebecca, Jacob and Leah. Its well documented (Genesis 49:29-32, 50:12-13). Who could contest it?

The “Palestinians,” and Arab/Muslim world, for one. And, the United Nations Educational, Scientific and Cultural Organization (UNESCO) for another.

“Um-Shmum,” as David Ben-Gurion said. In 1955, the Israeli cabinet discussed Defense Minister Ben-Gurion’s plan to take over the Gaza Strip from Egypt, because of increasing terror attacks originating from there. PM Moshe Sharett, worrying about the UN response, pointed out that if it hadn’t been for the UN resolution of 1947, the State of Israel would not have been founded. Ben-Gurion shouted, “Not at all! Only the daring of the Jews founded this country, and not some Um-Shmum resolution.”

UM is Hebrew for United Nations, and Shmum, is a term of belittlement. You get the point, Ben-Gurion didn’t think much of the UN. And, neither should Israel today…

For example in 2010, a report by UNESCO, labeled Kever Rachel or Rachel’s Tomb, a mosque. Imagine that? Its clearly documented that Rachel died and was buried by Jacob “…On the road to Efrat, which is Bethlehem. Jacob set up a monument over her grave; its the tomb of Rachel’s grave until today” (Genesis 35:19-20). And, Jews have been going there to pray for millennia.

And, in October 2016, UNESCO passed a resolution denying Jewish ties to holy sites in Jerusalem, including the Temple Mount (site of two Jewish temples) and the Western Wall. The resolution referred to the area using only their Arabic names, stating their importance to Islam. The resolution passed 10 to 2, with 8 abstentions. Tunisia and Lebanon proposed the resolution on behalf of the Palestinian Authority and Jordan.

At the time, Israeli Ambassador to the UN Danny Danon castigated UNESCO for the move, “The absurdity continues, and UNESCO has adopted yet another ridiculous decision that is completely disconnected from reality. UNESCO embarrassed itself by marching to the tune of the Palestinian pipers. All attempts to deny our heritage, distort history and disconnect the Jewish people from our capital and our homeland are doomed to fail.”

Then, in July 2017, UNESCO’s World Heritage Committee declared the old city of Hebron (where King David ruled before Jerusalem, I Kings 2:11), and the Tomb of the Patriarchs, “Palestinian” heritage sites.

Israel would withdraw from UNESCO

In December 2017, Israel announced that it intended to withdraw from UNESCO, after the US made a similar announcement, primarily because of UNESCO’s continuous anti-Semitic and anti-Israeli behavior.

PM Netanyahu in September 2018, explained why he would not attend a UNESCO sponsored conference on anti-Semitism, “Since 2009, UNESCO has passed 71 resolutions condemning Israel and only two resolutions condemning all other countries combined. This is simply outrageous. Anti-Semitism once discriminated against and defamed the Jewish people. Today it distinguishes against and defames the Jewish state.”

Then at the beginning of October 2018, the PX Commission of the Executive Board of UNESCO, adopted the following resolution:

III. The two Palestinian sites of Al-Haram Al-Ibrahimi/Tomb of the Patriarchs in Al-Khalil/Hebron and the Bilal Ibn Rabah Mosque/Rachel’s Tomb in Bethlehem

13. Reaffirms that the two concerned sites located in Al-Khalil/Hebron and in Bethlehem are an integral part of the Occupied Palestinian Territory, and shares the conviction affirmed by the international community that the two sites are of religious significance for Judaism, Christianity and Islam; [“Occupied Palestinian Territory?” Liars, its liberated Judea, tribe of Judah, belongs to Jews, get it.]

14. Deplores the ongoing Israeli excavations, works, construction of private roads for settlers and of a Wall inside the Old City of Al-Khalil/Hebron which are illegal under international law and harmfully affect the authenticity and integrity of the site, and the subsequent denial of freedom of movement and freedom of access to places of worship and asks Israel, the occupying Power, to end all violations which are not in conformity with the provisions of relevant UNESCO conventions, resolutions and decisions;

15. Regrets the visual impact of the Wall on the site of Bilal Ibn Rabah Mosque/Rachel’s Tomb in Bethlehem as well as the strict ban on access of Palestinian Christian and Muslim worshippers to the site, and demands that the Israeli authorities restore the original character of the landscape around the site and lift the ban on access to it;

UNESCO tries to rewrite the history of Israel

Anything Israel does do, are security precautions, to protect Jews from ongoing Arab attacks.

The resolutions were submitted by Egypt, Jordan, Lebanon, Morocco, Oman, Qatar and Sudan, and were approved several minutes after the beginning of the commission’s meeting, without much discussion or debate, rubber-stamping the Palestinian’s request.

Israel’s ambassador to the UN, Danny Danon, responded to the resolution, saying “This is further evidence, for anyone who did not understand why the United States and Israel withdrew from UNESCO, that again proves that UNESCO is a body based on lies and biases, and is deliberately acting against us. The State of Israel will not be a member of an organization that is trying to rewrite history and willing to be manipulated by our enemies.”

“On October 10, 2018, the Programme and External Relations Commission of UNESCO’s Executive Board adopted Resolutions 28 and 29 concerning religious sites in the Holy Land. USCIRF appreciates the Commission’s efforts to affirm, correctly, that these sites ‘are of religious significance for Judaism, Christianity, and Islam.’ At the same time, Resolution 28 describes holy sites in Hebron/al-Khalil and Bethlehem solely as ‘Palestinian sites’.”

“Commissioner Gary Bauer cautioned, ‘The idea that there’s a question about the Jewish historical presence in the Holy Land and specifically at these sites is unacceptable and diminishes the religious rights of the Jewish people. UNESCO has no business pronouncing on territorial sovereignty or arbitrating territorial disputes.’”

The new French Jewish Leftist Director General of UNESCO, Audrey Azoulay, appointed in November 2017, has claimed to be trying to “reform” the organization. When she was brought in, she said she would try to eliminate the endemic culture of anti-Semitism and anti-Israelism at UNESCO. She has been working hard, to prevent the withdrawal of the US and Israel, which is to take effect at the end of 2018. But since this latest resolution was passed on her watch, she seems largely ineffectual.

If the members of UNESCO don’t know how to open up a Bible and read about Abraham’s purchase of the Ma’arah, Sarah’s burial there, and later, how it becomes the family burial tomb; If UNESCO members hate Jews and Israel so much, and want to deny their rights in the Land of Israel, then Israel doesn’t belong in UNESCO. Don’t subject Israeli diplomats to associate with a bunch of illiterates, filled with hatred and lies.

About Hebron, Ben-Gurion wrote in 1970, “…we will make a great and awful mistake if we fail to settle Hebron, neighbor and predecessor of Jerusalem, with a large Jewish settlement, constantly growing and expanding, very soon.” Like Ben-Gurion, the over 800,000 visitors annually to Hebron-Kiryat Arba, and to the Ma’arah, know the truth.

Still the Smartest Guy in the Room

The Problem With Capitalism