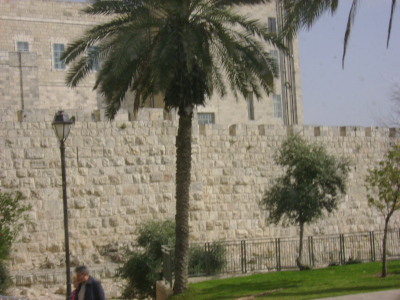 Hello this is Darrell Castle with today’s Castle Report. Today I will be talking about the southern border of the United States. What, if anything, should be done about it? To build or not to build the wall, that is the question but it is not the only question.

Trump makes the case for the wall

Tuesday night the President gave a prime time address from the oval office to make his rhetorical case for why the United States should build a wall on its southern border. He said that “this is a choice between right and wrong, justice and injustice. This is about whether we fulfill our sacred duty to the American citizens we serve.”

Who could argue with that statement? It is certainly a matter of right and wrong but that doesn’t answer the question. Is it the right thing or the wrong thing to build a wall? Asked in a different way the question could be is it right or wrong to allow foreign aliens unrestricted access to this country at the expense of American citizens, and if not then what should be done about it? Is there a solution without a wall?

The President mentioned that the problems he talked about tend to affect African-American and Hispanic Americans disproportionately. In other words they are hurt the worst by the problems associated with illegal immigration. Ironically, these are some of the most fervent opponents to his agenda. He mentioned dangerous drugs in particular. As he described it, vast quantities of drugs including meth, heroin, cocaine, and fentanyl are killing our citizens at the rate of 300 per week for fentanyl alone. Since the legal market for these drugs has almost dried up meaning few prescriptions are being legally written, the vast majority come across the southern border illegally.

Why do we put up with these crimes?

He talked a great deal about crime and gave several statistics regarding arrests for serious violent felonies. He mentioned that thousands of Americans have been killed by those illegally in our country. Crime by illegals is one area that I have problems understanding. I understand the crimes but I don’t understand why we put up with them. Why would we intentionally allow foreign criminal aliens to run loose in our country victimizing American citizens unless we are intentionally doing it for some sinister reason?

Let me bring just three recent cases into focus so we can see the faces and know something about the lives of three recent victims of the Democrat Party’s open borders, sanctuary state policies. The first two we can call a tale of two Gustavos since they both have the same first name. The first, Gustavo Garcia had a criminal record going back several years with everything from illegal weapons to drug trafficking. He was deported in 2004 and 2014. He was arrested again and ICE put a hold on him as a dangerous criminal alien. California said no we are a sanctuary state so they turned him loose.

A few days later he shot a farm worker in the chest, robbed a mini mart of $2000, shot and killed a man and wounded a woman in the parking lot of a Motel 6, shot at gas station attendants killing one, fired into several homes stole a car, shot at pursuing police officers, and was himself killed in an auto crash at 100 MPH which put four others in the hospital.

Number two is Gustavo Perez Arriaga who shot and killed a police officer and has a similar record of catch and release, but I’ve changed my mind. I can’t talk about this senseless violence any more so I will move on to the rest of the story. I will say though, that the Democrat politicians and some cheap labor Republicans too who pass laws which allow this mayhem to continue should perhaps be reminded of the faces of their victims. It would also be nice if the enabling sanctuary cities and sanctuary state politicians had to respond in damages to the victims and their families.

Who would oppose a wall?

Who would be opposed to border security? Apparently a lot of people are opposed to it. Oh they talk about it, and they say the words border security but they obviously don’t mean what they say. Democrats are completely sold out to the new Democrat idea of open borders thus building a permanent majority of voters and a permanent power base. I suppose it’s the old adage of we might cause so much chaos that the country is reduced to rubble but we will control the rubble.

The Republicans, on the other hand, don’t seem to want anything as pedestrian as power. They are completely sold out to the cheap labor lobby that funds their campaigns. How many Congressmen or Senators do you have to own to get what you want? Do you have to buy 435 house members and 100 senators? No, you only have to buy a majority of the leadership so it could be as little as 2 or 3 in each house and the rest just follow along.

What could he have said and what could he do that is not being done. He should hold all the victims up for the country to see and force the Democrats to own what they have done and say these people would be alive except for Democrat politicians. Chuck Schumer recently said “Americans don’t want a wall to be the symbol of America because the symbolism is bad for the country, for our economy, for our security, for our ability to get along in the world. “

The senator is absolutely dead wrong and the President could have quickly pointed to the lying hypocrisy of his words. To say that Americans don’t want the wall is an absolute lie because 63 million of them voted for Donald Trump primarily because he pledged to build a wall and make Mexico pay for it. I wonder what the senator thinks the symbol of America should be, perhaps the dead, maimed, and drug addicted bodies that his policies have created. He won’t spend a dollar to protect Americans with a wall but he will spend whatever it takes to satisfy his friends in Israel and he seems quite OK with their wall which is working quite well.

He did point out a little of their hypocrisy by showing that they were all in favor of wall funding under Obama, but not Trump. Now, for them a wall would be immoral but murder and mayhem is somehow not immoral. The Democrats are always very quick to show us the photogenic misfortunes of illegals anxious to cross the border into this country but they are very reluctant to show or even mention the Americans killed by illegals that were admitted and protected by Democrat politicians.

The President still will not mention or explain a remittance tax and how it could work to fund the wall and in a sense Mexico would be paying for it. This refusal by the President to propose the tax allows the Democrats to continually point out that he said he would make Mexico pay for it and he cannot do that.

House speaker Nancy Pelosi said that a wall is “an immorality between countries” then she added “it’s not cost-effective”. Well if it’s an immorality between countries as the speaker says it is apparently not between neighbors. Nancy Pelosi, Chuck Schumer, and Barack Obama all live behind very substantial walls. Good for them, but it’s an immorality for the rest of us. The not cost-effective line is ridiculous on its face and easily refuted as the President was able to do. Once again a wall is not an immorality for Israel or for Democrat politicians but it is for us.

A national emergency might be in order after all

What else could the President have said that he unfortunately did not say? He could have said that it is my duty to protect the American people, their way of life including their right to a republican form of government as well as their right to be free from invasion under the constitution. In my opinion those things are in grave danger and I am therefore declaring a national emergency considering the critical state of exposure at our southern border. I am ordering the United States military under its resources and manpower to begin construction of a security wall immediately and devote whatever resources required to completing that task.

He could also have said, look folks I have a question for our Democrat friends; how many is enough, how many illegal immigrants will it take for you to say OK that’s it? Will 10 million be enough, 20million, 50 million 100 million? How many I wonder just so we will all know when you’ve had enough.

We have laws in America which purport to decide who comes into this country and who does not. Those are laws duly passed by both houses of congress, Democrat and Republican and signed by the President. Executive orders to enforce laws duly and lawfully passed by congress are constitutional and therefore could lawfully be used to enforce immigration laws.

There is one other solution that I do not think the President proposed but it is so sensible, logical, non violent as well as cost-free that it should be enacted immediately. Welfare paid for by American citizens should be available for American citizens only. All tax funded benefits should be immediately cut off for non-citizens. That would probably provoke self deportation and deter illegal entry. That and a tax on remittances sent back to home countries would be an important first step. The fact that this hasn’t been done indicates that our politicians don’t want to solve the problem of illegal immigration. To the contrary they want to make it worse.

In conclusion, William Gaddis said, “you get justice in the next world; in this one you have the law.” I will add to that by saying that without the law you have neither law nor justice. The American people are going to have to decide if they want a rule of law in America or not.

Bisexual Senator Loves the Constitution Yet Shuns the Author – Then On Whose Behalf is She Serving?