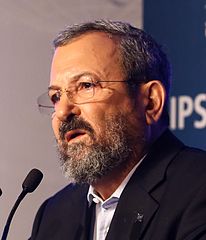 Little Napoleon Barak is going to save Israeli Democracy? What a bunch of claptrap Orwellian doublespeak.

Well let’s check out history. How well did the original Napoleon save France’s democratic revolution against the monarchy?

Hmm, if I recall he crowned himself emperor!

…and the imitation, Napoleon Barak

Ehud Barak is the second most failed prime minister in Israeli political history. Only after Yitzhak Rabin, whose peace process madness has led to over 2,000 Jews killed since the beginning of Oslo in 1993, and tens of thousands injured.

Let’s remember Barak was on duty as prime minister, when Yasser Arafat started the Oslo War (second intifada) in the year 2000. That, after Barak had already agreed to give away 96% of Judea, Samaria, and Gaza, to the Palestinian murder machine at Camp David.

Of course Arafat rejected the offer, because the modern day Amalekites want it all, all of “Palestine.”

The other modern Amalekites

Who can forget the former leader of Hamas in the early 2000s, Abdel Aziz Rantisi, who devoted his life to a single purpose, destroying the State of Israel. “By God, we will not leave one Jew in Palestine,” he said. “We will fight them with all the strength we have.”

Fatah, Hamas, the Palestinian Authority, and Arafat’s replacement, Abbas, all want to wipe out the Jews and Israel.

Notice the PA logo includes all of Israel today. Notice Abbas has thoroughly rejected Trump’s misguided peace overtures. Notice Hamas, Islamic Jihad, and Fatah murderers are still doing what they were bred to do… Kill Jews!

Back to little Napoleon Barak and his delusions of grandeur.

In 1997, then Justice Minister Tzachi Hanegbi attacked the new Labor Party leader Ehud Barak, dubbing him “Ehud Barach” (Hebrew for “Ehud ran away”), which has entered the mainstream as a nickname for him.

Hanegbi cited a report that Barak, as chief of staff of the IDF, was present during a training exercise accident, known as the “Tze’elim Bet” disaster, five years earlier in 1992. Five soldiers died and six were injured that day.

Barak has been dogged by the allegation that he did nothing to help the injured. Soldiers who were at Tze’elim said that Barak, who was observing the exercise, did nothing for the wounded and took off in his helicopter before they were evacuated. Barak has always insisted that his task as army commander was not to carry a stretcher but to ensure that everything was being done by his subordinates to save them.

After getting elected prime minister in May 1999, Barak withdrew Israeli forces from South Lebanon, allowing Hezbollah to position themselves on Israel’s northern border. Then, not having been able to defeat the PA at the beginning of the Oslo War, Barak was also defeated by Ariel Sharon for prime minister in early 2001.

Ehud Barak was the shortest serving prime minister in Israeli political history. Not getting what he wanted, power (the premiership), Barak has fled the political battlefield three times, i.e. quit politics. Only to sock away some cash, regroup, and attempt another invasion.

After getting his wallet “high” in the medical cannabis industry, as chairman of InterCure, Barak’s now ready for his fourth attempt to take power in Israel.

“The State of Israel is just ahead of a complete collapse of Israeli democracy,” Barak tweeted when he announced the party’s name. “Now is the time to bring back Israel’s hope and courage, to unite and to bring Israel back to sanity. We are a Democratic Israel.”

A major case of the “pot” calling the kettle black. Little Napoleon is on the warpath again.

And on top of all that, Barak is listed in Wikipedia, on a “List of Wartime Cross-Dressers.”

“The later prime minister of Israel [Barak], disguised himself as a woman to assassinate members of the Palestine Liberation Organization in Beirut during the 1973 covert mission Operation Spring of Youth.”

Other members of the new party

Others who have joined Barak’s latest party, include former Deputy Chief of General Staff, Yair Golan and granddaughter of Yitzhak Rabin, Noa Rothman, who still defends her grandfather’s legacy of death and destruction.

Rothman has even accused Netanyahu and his government of, “…changing the system…[he] holds the Israeli public hostage to save his skin and is ready to assassinate Israeli democracy.”

Golan is infamous for making a speech on Holocaust Day in 2016, in which he drew a parallel between Germany in the 1930s and Israel today, by saying, “If there is one thing that is scary in remembering the Holocaust, it is noticing horrific processes which developed in Europe (particularly in Germany) 70, 80, and 90 years ago, and finding remnants of that here [in Israel] among us in the year 2016.”

That’s the scariest thing about the Holocaust to Golan? Not Jews being murdered in their millions?

So the granddaughter of the most failed prime minister of Israel; his close second, little Napoleon Barak; and an ex-general who worries Israel is closing in on “fascism,” ignoring the PalestiNazis; are going to lead the way to a new era of peace, prosperity and democracy in Israel.

Yeah, put that in your pipe and smoke it!

This is a crop of a larger image from the Herzliya Conference of 2016, in which Ehud Barak took part. The photographer, Adi Cohen Zedek, granted permission to anyone to use this image. The letter to that effect is on file at Wikimedia Commons.

Z is for Zionism