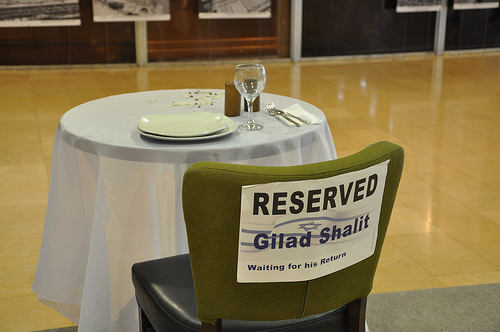 It was a lovely, warm August afternoon in Jerusalem, 2001, a time when people strolled about, greeted neighbors, enjoyed a beverage or ice cream at an outdoor café, or lunch in the numerous restaurants. It was a day when an Arab man, carrying a guitar case, entered the crowded Sbarro’s pizzeria, an eatery specifically selected for the large number of Jewish children it attracted. He bought a slice of pizza and sat down among the Jews at one of the tables, contrary to the constant myth that Israel is apartheid. Upon finishing his snack, he opened the case and ignited the “nail bomb” that the female terrorist and mastermind, Ahlam Tamimi, had smuggled into Israel. The suicide terrorist, Izz Al-Din Shuheil Al-Masri, blew himself up along with 15 other people, including seven children (two Americans), and wounding about 130, some hideously, and one who remains in a coma.

Although Tamimi, the architect of the Sbarro massacre, had been apprehended, tried, convicted, and condemned to 16 life sentences in an Israeli court of law, she was released in an Israeli prisoner exchange. Gilad Shalit, a soldier in the Israel Defense Forces (IDF), who had been kidnapped by Hamas militants in a cross-border raid via underground tunnels near the Israeli border, had been held captive for more than five years as a bargaining chip. The Israelis were finally able to secure his release on October 18, 2011, but only as part of a complete prisoner exchange in accordance with the PA 2004 Law of Prisoners and Released Prisoners, by turning over 1,027 Palestinians, including Ahlam Tamimi, who were collectively responsible for killing 569 Israeli citizens.

…and her mother, too

The terrorist’s mother was subsequently honored by Mahmoud Abbas with $910,823 (3.2 million shekels) for her glorious sacrifice – except that the sacrifice is suddenly no longer sacrificial, but a means to an end, the commercial enterprise required for fame and fortune in the Arab world.

Tamimi, then age 21 and Hamas’s first female terror operative, had been awarded $51,836, until her release from prison. Now, a free and unrepentant terrorist, she is “exiled” to Amman, Jordan, home to her parents and most of her siblings, married and raising a family. In opposition to the extradition treaty signed by the Hashemite Kingdom of Jordan with Israel on March 28, 1995, followed by the exchange of instruments of ratification by Jordan and US President Clinton on July 29, 1995, Tamimi is free to travel under Jordanian protection throughout the Arab world. She speaks about her terrorist career and incites to murder Jews. The US Department of Justice and the FBI recently revealed the serious terrorism charges against her, maintaining the still valid and binding “Treaties in Force” (page 252), but after two years, Jordan still blocks extradition of only Tamimi.

Her cousin/husband, another impenitent convicted terrorist-murderer who was also released in the Shalit trade deal, receives monthly payments from the PA.

The bombmaker, Abdullah Barghouti, earned $213,848 for several now-infamous bombings, and is currently serving 67 life terms in an Israeli prison.

The Sbarro terrorists and their families receive $7,321 monthly, generous stipends doled out by Mahmoud Abbas from the coffers of the world’s “humanitarian aid” given only to “Palestinians.”

Throwing off on others for the kill to pay plan: Ilhan Omar

Ilhan Omar’s infamous words, “It’s all about the Benjamins, Baby,” were another Arab tradition – the projection of their own blameworthy deeds on others.

For an overall scope of the pay-to-slay business, remuneration to terrorists came to $134 million in 2018 alone, with individuals receiving from NIS 1,400 to NIS 12,000 per month, depending upon the length of their imprisonment in Israel.

How does the society produce these inhuman weapons of mass destruction? Where should we place responsibility for the damaging construct of Islamic family life – the hierarchy, interaction, communication, commitment, the hopes and fears, the warped moral code, social relatedness, stress and crisis management? The Koran defines them all.

What happens to children in Islam

In Islam, children are produced and raised for exploitation – objectified for the sake of fulfilling the demands of Allah and Mohammed and controlled in the shame/blame society. The children are restrained by shaming – taught they are defective, guilty of feeling they have done something wrong, and unworthy enough to be driven to suicide – to achieve honor for group acceptance.

The young, prepubescent boy may be humiliated by the emotional and sexual abuse he is forced to endure by older men. He is obedient and in a perpetual state of anger also at his mother for her subservience and for not protecting him. His perpetual shame prevents him from becoming an autonomous adult and getting his needs met appropriately. In order to cleanse himself, he projects that shame onto others, with an eagerness for revenge. Addicted to rage and drilled in a variety of weapons, he is eager to do battle with Jews and Christians, to achieve martyrdom and glorification, his only release from the oppressive culture.

The girl feels the brunt of the shame/blame culture, as she is subject to the embarrassment, pain and possible lasting infection from the Female Genital Mutilation, and the constant reminder that she may be veiled, stoned and killed, and blamed for sowing disorder in the “ideal society.” Consider the clothing restrictions to live almost completely covered; the ban against certain hairstyles and smoking; bans on socialization, travel, schooling, celebrations and music. This society exists on domination and submission, on a lack of empathy and sexual misery, where rape plays a particularly unique role.

The girl may become one of four wives in a resentful, competitive household, a concubine or sex slave. The male’s psychological fusion with his immature and frightened mother keeps him terrified of women and sex, programmed to “kill off his mother” by murdering other women in cold blood as well as their own mothers and non-Muslims. The female cannot extricate herself from the confines of an Islamic life of degradation, of marriage, neglect and violence, unless she emulates the boy’s role. If she becomes a female jihada, she will earn praise, admiration, and be paid handsomely for her acts of terrorism, even for the final act of martyrdom.

Here are profiles of some infamous female terrorists:

And what happened to other murderers who were released along with Tamimi?

A select few are shown here:

To kill and kill again

International aid is actually a matter of debate!

International aid to the Palestinians is a contentious issue. Australia ended direct aid to the PA amid fears that money is going to terrorists (July 2018), America cut $200 million of its aid to Palestinians (August, 2018), and New Zealand suspended UNRWA funding (August, 2019), while Norway and Ireland (June 2019) increased theirs, as have a shocking number and variety of organizations.

In keeping with Mohammed’s mandates, the “free male Muslim is entitled to the spoils of battle when he has participated in a battle to the end of it.” (Reliance of the Traveller, o10.0) The dubious generosity of the European Union enables the Palestinian Authority to pay the rewards for terror to Palestinians, with no oversight on corruption of subsidies to convicted terrorists. A Times of London journalist wrote (October, 2013), “Billions of euros in European aid to the Palestinians may have been misspent, squandered or lost to corruption,” yet the euros continue to flow in.

The money goes to pay to kill

Mahmoud Abbas never reveals that donors’ funds go to the PLO, and he assures the jihadis and their families that there will always be money for those “heroic” Palestinian Arabs who will slaughter the children and Holocaust survivors. He also knows he can count on the Europeans to turn a blind eye to the misuse of funds as they continue their own eternal war against the Jews.

In loving memory of Malki Roth HY”D and Michal Raziel HY”D and all who suffered and died at the hands of Islamic murderers.

“Gilad is still Alive”by Lilachd is licensed under CC BY 2.0

Autism—still looking for answers in all the wrong places