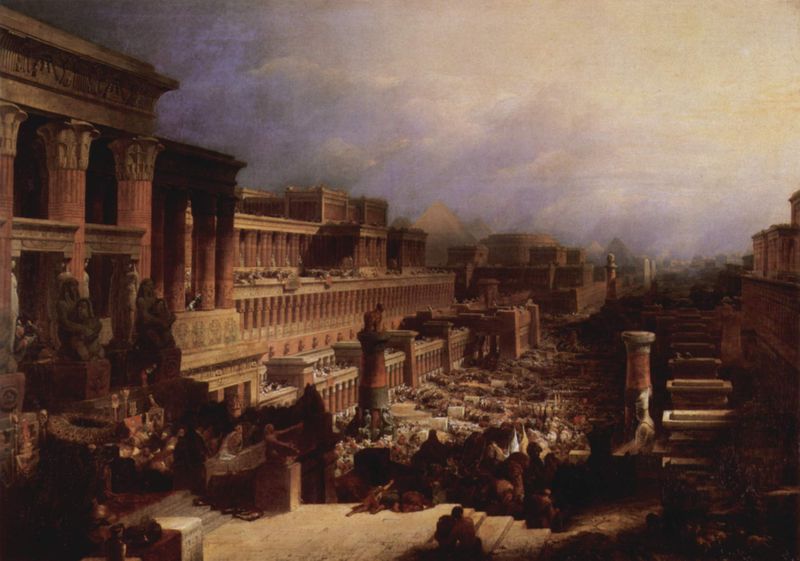 So Benny Netanyahu and Benny Gantz (its all about the Benjamins), went to Pharaoh Trump and demanded in the name of God, leave My Land alone… Or, did they?

God has a sense of humor. He’s throwing this at Israel, at a time when Jews around the world have been reading their weekly Torah portions. This week’s lesson tells of Moshe and Aaron going to Pharaoh, demanding Pharaoh release the Jews to serve Him. Of course as everybody knows, Pharaoh refuses.

Last week the plagues started; this week, more of the same. Pharaoh continues to dig into his position, till the tenth plague, the death of the firstborn. Completely broken, Pharaoh finally blinks and caves in.

Has Trump caved in with his “peace plan?” Did Netanyahu tell Trump, “we’re going to worship the God of Israel, in ALL of Eretz Yisrael, the Land promised to Abraham, Isaac, and Jacob, exclusively?”

Moshe told the elders of Israel,

Go at once and select the animals for your families and slaughter the Passover lamb… When the Lord goes through the land to strike down the Egyptians, he will see the blood on the top and sides of the door frame and will pass over that doorway, and he will not permit the destroyer to enter your houses and strike you down.

Obey these instructions as a lasting ordinance for you and your descendants. When you enter the land that the Lord will give you as he promised, observe this service. When your children ask you, “What does this service mean to you?” tell them, “It is the Korban Pesach (Passover offering) to the Lord, who passed over the houses of the Children of Israel in Egypt and spared our homes, when he struck down the Egyptians.”

Pharaoh, all his officials, and all the Egyptians got up during the night, because there was a great outcry throughout Egypt, for there was not a house without someone dead. During the night, Pharaoh summoned Moses and Aaron [ran through the streets terrified, looking for them – Ramban] and said, “Get up! Leave my people, you and the Children of Israel. Go, worship the Lord as you have requested. Take your sheep and cattle, as you have said, and go. And also bless me.” The Egyptians strongly urged the Jews to hurry and leave the country. “For otherwise,” they said, “we will all die!” (Exodus 12:30-33).

The American plan for the Land of Israel

American elections are coming, the impeachment trial knocks on the door, Trump’s campaign will get into full swing soon. He want’s to put his Middle East Real Estate Project in order, get it out of the way, and maybe get that blessing too…

Moses defended the people and the Land

While Israel has waited 70 years for peace, the Jews in Egypt, waited 210 years, to get out of slavery and leave Egypt. Yet, instead of fleeing right away, Moshe (a known extremist and true Jewish leader, who killed an Egyptian earlier), tells Pharaoh,

What are we thieves, that we should leave at night? We will leave when we’re good and ready, with heads held high, in broad daylight, in full view of all Egypt. (Mekhilta)

That’s a Kiddush HaShem, the world sees, the God of Israel’s Power and Majesty to free His people.

In the morning, Moses instructed the Jews to ask the Egyptians for articles of silver and gold, and for clothing. God made the Egyptians favorably disposed toward the people, and they gave them what they asked for… (Exodus 12:35-36).

But Netanyahu and Gantz do not defend the Land

Pity Netanyahu and Gantz weren’t “tough” like Moshe and Aaron, telling Trump, lay off our land, and watch us apply sovereignty to all of it, in front of the eyes of the whole world. And, you’re going to recognize it. There’s no such thing as “Palestinians,” and there will never be a “Palestinian State.”

Maybe they would have been granted, all they demanded from Trump, like in Egypt? God just gave Netanyahu and Gantz, their chance at eternal greatness, and they blew it.

Instead, the peace deal that’s been announced, is a historic tragedy for the Jewish people, and a Chillul HaShem (slap in the face to the God of Israel, who gave it back to us in 1967).

How could any Jewish leader agree to compromise on God’s Land?

Meanwhile, some Temple Mount activists, working for freedom of Jewish worship and prayer on the Temple Mount, welcomed Trump’s plan. Officially called, “Vision for Peace, Prosperity, and a Brighter Future for Israel and the Palestinian People,” the plan calls for Jerusalem’s holy sites, to “remain open and available for peaceful worshippers and tourists of all faiths.”

Instead of recognizing the Jewish people’s exclusive rights to the Temple Mount, it keeps the status quo.

People of every faith should be permitted to pray on the Temple Mount/Haram al-Sharif, in a manner that is fully respectful to their religion, taking into account the times of each religion’s prayers and holidays, as well as other religious factors.

Some Temple Mount activists claim that “the prayers of the Jews on the Temple Mount are now officially recognized by the United States,” and this recognition “advances the People of Israel in a major step toward fulfilling Jewish destiny at the site of the Temple.”

The activists plan to test this clause, by making an official request soon, to “allow every Jew to offer the Passover sacrifice on the Temple Mount, the most important commandment in the Torah,” this Pesach (Passover).

So, we will soon see the limits of the “peace plan,” who has gained “rights” and who has lost out…

Time to renew the original Passover in the Land itself

For those religious Jews, who might object, really, there’s no good reason not to bring the Korban Pesach in our time. The Rambam (Maimonides), ruled that a Jew is obligated to offer the Passover sacrifice even when the Temple has not yet been built, even in ritual impurity, and even by today’s Kohanim (priests). Most of the halachic (Jewish Law) issues have been solved in the last couple hundred years, at least since the time of the Chatam Sofer, and particularly in our generation. Halacha is not the barrier. Go check it out. Also, see my article, “Getting Ready For Korban Pesach This Year.”

Delay in recognizing rights to the Land in Judea and Samaria?

Although at first it was floated that sovereignty would be applied to the Jewish towns and villages in Judea and Samaria by next week, now Kushner and others are saying to hold off until after the next elections. And what excuse will be made after that?

At this point, all that’s occurred, is that the United States has officially recognized Palestinian national aspirations for an independent state, and Netanyahu as head of the State of Israel, has praised that. He glowingly told a Fox interviewer, “It gives the Palestinians national dignity.” Whose Prime Minister is he?

US Secretary of State Mike Pompeo said, “It’s the first time the Israelis have ever conceded to a map, that actually lays down real outlines of what this will look like and what this means, and it provides a clear pathway for a Palestinian state.”

A far cry from Moshe and Aaron and true Jewish leadership…

A Letter From the American Forefathers: We Warned You!

Only The Likud Can… Sell-Out | Conservative News and Views

[…] also this essay on the weekly Torah reading and its direct […]