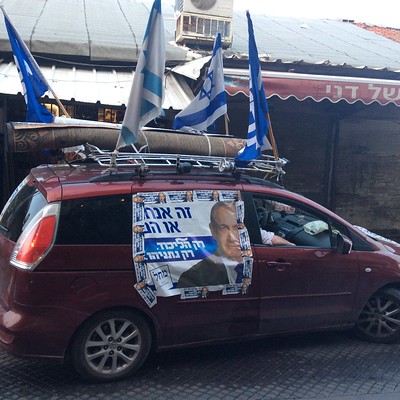 “Rok HaLikud Y’Chol – Only the Likud can…” a campaign song and slogan that’s seeped into the Israeli body politic for years, like a taste-less, odor-less, toxic pathogen.

Only the Likud can…arrange bad deals

“Only the Likud can…” give away the Sinai.

“Only the Likud can…” go to Madrid (the seed of the Oslo tragedy).

“Only the Likud can…” kick Jews out of Gush Katif.

The Trump-Netanyahu partition plan of Judea and Samaria, only the Likud can… Sell-Out!

The checkered history of Likud

This from the party, whose revisionist roots sang, “Shtei Gadot La’Yarden,” (The Jordan has Two Banks), “Two Banks has the Jordan – This is ours and, that is, as well.” A poem written by the founder of Revisionist Zionism, Ze’ev Jabotinsky, in 1929.

Many Likudniks, revisionists, sons and daughters of the “fighting family,” were secular nationalists, and have fallen by the wayside, starting with Begin, including Ariel Sharon, Ehud Olmert, Dan Meridor, Tzipi Livni, Tzachi HaNegbi, and now the latest casualty Benjamin Netanyahu.

The Likud has always been branded a “right-wing” party in American and international media, and at home in Israel. It’s convenient for the left, to see it that way. It makes them and their policies, seem less extreme and Likud more extreme.

But it’s never that simple

But, I’ve pointed out for years, that’s simply not true. First of all, the right-left description is too simplistic, to truly understand the nuances of Israeli politics.

Don’t forget the Haredi parties, where do they go? Aryeh Deri of Shas, has already announced he supports the partition plan.

Israel in fact, has a political center and Likud is part of that.

This isn’t mere semantics, because to understand fully the range of political views and nuances in Israel, one needs to have the language to describe it.

Itamar Ben Gvir recently said, those who support the “peace plan” on the “right,” highlight the difference, between the practical and ideological right. He pointed out that Otzma Yehudit is an ideological group, and they reject the plan totally. Shaked and Bennett have also rejected a Palestinian State.

Likud is centrist, not on the right

I prefer calling Likud centrist, since this is the common lingo. There are real right-wing parties, and individuals in Israel. Come election day, all those who love Eretz Yisrael should vote for them.

All this discussion of “peace plans” and partitions, reminds me of Yom HaAtzmaut (Israeli Independence Day) 1967, a time just before the Six-Day-War.

Rav Tzvi Yehuda Kook spoke at Yeshivat Merkaz HaRav during the celebrations. The joy in the yeshiva was visible. He spoke of a November evening, nineteen years earlier. The nations were debating the fate of Eretz Yisrael (the Land of Israel). People were glued to their radios. Then, the announcement came, the United Nations had just voted to partition Mandatory Palestine into Jewish and Arab states.

Spontaneous joy swept the country. People rushed out to dance in the streets. Jerusalem was rejoicing.

I couldn’t leave the house. I sat alone, distressed. I tried to understand what had just happened. I wasn’t able to connect to their joy. The words of HaShem (the God of Israel) had just come true, “V’Et Artzi Chilku” (They Divided My Land – Yoel 4:2). Try as I might, with all my soul and spirit and will, I couldn’t bring myself to go out.

He rhetorically asked, “How could it be that I didn’t go out and rejoice?”

He thundered again, “They Divided My Land!!!”

An affront to God

Then full of love for HaShem and his Torah, he cried out, “Where is our Hebron? Have we forgotten her? And where is our Shechem? (Arabs call it Nablus). And Jericho? Have we forgotten them? All of Ever HaYarden (the East Bank of the Jordan) is ours too! Every Arba Amot (four cubits) of HaShem’s Land.”

He then shouted out in visible pain, “Is it in our hands [our right] to give away, even a millimeter of land?” And he powerfully answered, “God Forbid!!!”

Everyone in the yeshiva was shocked, they couldn’t believe what they had just heard. Everyone was there to celebrate Yom HaAtzmaut, yet Rav Tzvi Yehuda wanted everyone to understand at what cost it came. He wanted to emphasize the value of every part and parcel of Eretz Yisrael. He wanted them to feel the loss personally.

The Likud must answer for this

Rav Tzvi Yehuda gives us Emunah-Colored Glasses, on how to view this current partition plan, that Netanyahu and so many, have already accepted so joyfully.

PS: Has anyone noticed that the Coronavirus hit America at about the same time, as the announcement, that Trump’s partition plan, was going to be unveiled the following week?

See also this essay on the weekly Torah reading and its direct applicability.

This image shows a car with a Likud campaign poster. The translation from Hebrew into idiomatic English is: “Us or them. Only the Likud, only Netanyahu.”

“Wahlen Israel 2015” by boellstiftung is licensed under CC BY-SA 2.0

Related Topics:bibleIsraelMiddle East
Up Next

Terror-Tied CAIR Attacking Minnesota Church Clergy – They Are Not The Victims, They Are Perpetrators Pushing For Absolute Rule

A Letter From the American Forefathers: We Warned You!