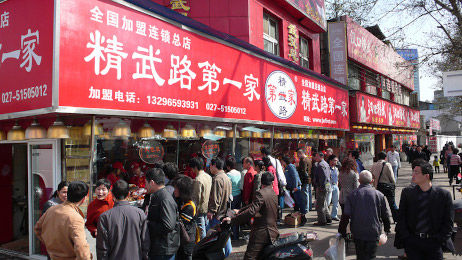 Hello, this is Darrell Castle with today’s Castle Report. Today I again talk about what is, or at least should be, the most important story on earth. That is: 2019nCOV, the Wuhan Flu virus. The World Health Organization (WHO) no longer names diseases or pathogens after people or places; hence the scientific name. The name, when broken down, means discovered in 2019, novel or new, and a Corona virus.

Zero Hedge breaks the news: Wuhan Flu is a bioweapon!

This story changed completely a few days ago. Zero Hedge released a report with the title “Is This the Man Behind the Global Coronavirus Pandemic?” Zero Hedge is a well-respected web site not given to exaggeration. But the various tech giants took down the post, and Twitter suspended their account. It seems that the official narrative of how the virus began is being carefully maintained behind a solid wall. That wall includes virtually all mainstream media and all governments. If you want to stay online and you want to continue talking, you must continue the official narrative.

Zero Hedge said that the official theory for the spread of the Corona virus epidemic, namely because someone ate bat soup at a Wuhan seafood and animal market, is a fabricated farce.

The real reason behind the viral spread is because a weaponized version of the Corona virus (one of which may have originally been obtained from Canada), was released by Wuhan’s Institute of Virology (accidentally or not), a top, level-4 bio-hazard lab, which was studying “the world’s most dangerous pathogens.”

The making of the Wuhan Flu

It seems that this lab and Dr. Peng Zhou, Ph.D, a researcher at the lab, were very interested in bats. They knew that bats carry many extremely dangerous pathogens within their bodies but do not suffer from them. Some of these pathogens include Ebola, Marburg, Hendra, Nipah, and Sars Cov. Yet the bats show no clinical sign of disease. The Institute of Virology lab discovered that the bats could maintain just enough defense against the pathogens without triggering an immune response.

Dr. Zhou began studying the dampening of the immune response in bats. This lets them live on the edge with the most dangerous pathogens on earth inside them. The lab even released a press release announcing Dr. Zhou’s achievements. The title of the release was “Wuhan has the first person in the global bat immunity research”. The press release went on to describe his credentials and staff of 80 researches who helped to uncover this knowledge.

Bats and coronavirus – a deadly mix

Dr. Zhou was studying how the bats carry the most nightmarish viruses on earth and yet remain immune. He also researched mutant corona viruses that could overcome the natural immunity of some bats. These superbug corona virus strains are resistant to any natural immune pathway. And now they appear to be out in the wild.

What does all this information mean? What difference does it make whether bats are immune to virus attacks or not? It makes a difference because if we don’t know where it came from or if we maintain an official lie how can we devise a method of defeating it?

Wuhan Flu escapes – or someone releases it

What apparently happened was one of Dr. Zhou’s superbugs escaped, or was released into the world. The Wuhan Fish Market was chosen as a convenient ruse. It further appears that the virus has been weaponized. Someone, somwhow, split and added the HIV virus to make it much more dangerous and give it more survivability. What’s left, then, is a very deadly virus for which we humans have no herd immunity, and no internal defense.

Herd immunity, as in the common cold, means that if one person has no immunity and is infected, the next person he is in contact with will be immune. So the spread stops. With this virus that is not the case, so it spreads like wildfire. The most prestigious medical journal in the world, the British Journal Lancet, has also published an article supporting this view.

Lying about origins – and epidemiology – of Wuhan Flu

It seems that the origin of the virus is not the only thing the Chinese Communist government has lied about. Once again, Zero Hedge reported that ten days ago, before the news started coming in, a U.K. researcher predicted that over 250,000 Chinese would be infected by February 4. The Chinese say the number of infections has now risen to about 25,000 or one tenth of the prediction. Many reports say the officials were rushing to cremate corpses overnight so they could not be counted. The other trick to hold down the numbers is apparently many of the sick and dying are listed as having pneumonia instead of the virus.

Now you see the numbers – and now you don’t

Why all the government lying? If the government of China is lying, then why will it not release the truth? On January 29, Zeng Guang, chief of epidemiology at China’s CDC, made a rare candid, by Communist standards, admission about why the Chinese officials cannot tell people the truth. He gave an interview with the State run, Global Times:

The officials need to think about the political angle and social stability in order to keep their positions. The Chinese Premier Xi called on people to work together because the outcome would directly affect the social stability of the country.

However, if the higher numbers are reflective of what’s happening in China then no attempts to mask the panic and the full extent of the pandemic will control the truth and keep it from coming out. For as Shakespeare said “In Anger Truth Will Out.”

Compare to the official story of Wuhan Flu

So, there you have one version of what may be happening in China and the world. Thank our friends at Zero Hedge. We have another version from the Chinese Government. That is that the virus started in the Wuhan Fish Market from bats. It then infected humans through their contact with, and consumption of, the bats. Virtually every mainstream outlet on earth puts that version forward. Everyone simply takes for granted that we accept it as true.

It is also the theory of doctors at Johns Hopkins and other prominent hospitals and research facilities. I saw an interview with a doctor from Johns Hopkins who said:

These properties include its survivability and rapid spread, and the length of time before symptoms when it is still infectious. He went on to say that it is nothing to worry about. If it infects you, it will be nothing more than a bad cold. Only a small number of the cases will progress to pneumonia.

I certainly hope the good doctor is correct, but I have a few questions about his point of view. If it is true that it is no big deal, why is China currently tearing apart the entire country to control it. Millions of people fled their capitol city ahead of the quarantine and now the rest of the 24 million are stuck in their homes in a deserted city. Hospitals are full and people are being told not to come to the hospital because there is no treatment and no room.

That is the real question here that someone needs to answer, i.e. that we have no treatment. If we have no immunity, and no effective treatment, how are we going to stop the spread? If a person is one of the unlucky ones who does happen to get pneumonia, then that person is dead because there is no cure. The Chinese doctor who first released the report that China has a terrible problem on its hands was arrested and forced to repent of spreading rumors. He caught the virus from one of his patients and died yesterday. Now even the Chinese government admits that he is dead.

What has the government done?

China now has basically the entire country under quarantine. The Chinese economy, upon which many American companies depend, is shutting down. This while the Chinese Communist government comes to grips with what it has and what it has done. The Chinese government at the very top now probably understands that it has unleashed a terrible plague upon the world. No one should accuse them of such a thing without proof. But the proof is right there in the Zero Hedge material and in the government’s reaction to the virus.

The government of China knows what they’ve done to their own people. But instead of admitting it and working with the world to find an answer, they try to scapegoat the Chinese people by blaming them for eating bats. By the way where did the Chinese get their propensity for consuming wild animals that many of us would consider revolting or even dangerous?

Setting up for the Wuhan Flu: Mao’s famine

When Mao took over China in 1948, he set out to impose a Communist utopia on the population. One of his first acts was the collectivization of farms and the surrender of all food supply to the government. Tens of millions of Chinese people starved to death. They started eating wild animals, tree bark, or anything else they could gather. The propensity to consume such things became part of the culture that still exists today.

Getting out the truth about the Wuhan Flu

There are people inside China risking their lives and freedom to get the truth to the rest of us. The Chinese government has tried very hard to prevent what it calls “spreading rumors” that disrupt the social order. It would be accurate to say that another name for spreading rumors would be telling the truth. Many bloggers are continuing to do that, and they somehow get their message out. I’ve seen many inside Wuhan post videos from those in quarantine. The New York Times has a Chinese reporter inside Wuhan. But she is apparently restricted and monitored so she gives us mostly the party line.

The most helpful network for me has been Al-Jazeera. They sent a reporter to Wuhan but she was not allowed to enter. They do provide a link to a Chinese blogger who reports in nameless seclusion from Wuhan quarantine. Her writing is fascinating stuff and you can find the link from Al-Jazeera’s web site.

There is no need for me to go into numbers of infected and dead. These numbers would be inaccurate by the time you hear me. This disease is either a terrible mutant plague unleashed upon the world by the Chinese government, either intentionally or accidentally, or it isn’t. I pray that it is not, and it can be stopped or at least its effects lessened.

Finally, folks, I have one last question before I go. Why is it always China? Whether it’s this new mutant virus, or whether it’s SARS, MERS, bird flu, swine flu and others it always seems to originate in China. The Chinese people are then forced to remain silent in the face of the most obvious lies. The rest of the world will hopefully stop cooperating with such evil and seek the truth, maybe.

The author has, of course, updated the story from his most recent article about the Wuhan Flu.

Geopolitics and the Wuhan Flu