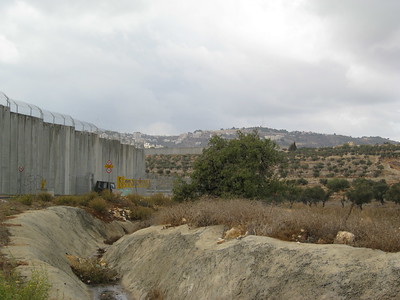 Islamists use our country’s laws and multicultural activism to transform our public libraries into venues for spreading Islam. The indoctrination includes stories that skew the truths and conceal their violent history. William Sutcliffe’s The Wall is such a novel, designed to impact the mind of the American 9- to 13-year-old reader. The following is my evaluation of such a book.

We meet the thirteen-year-old Jewish boy, Joshua, when he’s playing with his friend David, but he’s left alone to retrieve his new ball from the other side of the fence, “The Wall,” in Amarias. This is an anagram of Samaria, once the capital of the Northern Hebrew kingdom of Israel, founded in the 9th century BCE, long before Islam or Palestinians.

The real modern history of Samaria…

Will the young reader know why there is a fence in Amarias that renders it off limits? Or that Jordan was among the five Arab states that attacked the new State of Israel in 1948? Or that Jordan then annexed Judea and Samaria and renamed it West Bank? Will they learn that Jordan ruled for 19 years, attacking Israel until finally, in 1967, Israel was victorious? Under the rules of war, Israel must now rule Samaria, the Sinai Peninsula, and Gaza, until someone emerges to work out a peace agreement. Samaria is now home to three million Palestinians and 500,000 Jews, but Sutcliffe calls only the Jews “settlers.” Thus the Islamic deception about Israel begins.

The real Joshua would grasp the danger of entering Samaria; the young readers would not. They read of soldiers and checkpoints, but not their purpose, which is to provide protection from Arabs who cross into Joshua’s side and slaughter Jews without provocation – such as the Fogel family massacre in 2011. Joshua finds a working flashlight and a tunnel – not identified as a “terror tunnel,” that provides below-ground access to do harm in Jewish areas, even Joshua’s home – and he begins his trek to the other side.

Upon exiting, he sees a demolished home, damaged contents sympathetically described, and bulldozer tracks. Without explanation, the young reader will assume Israeli soldiers destroy homes for sport or spite. We have no history about Joshua’s home. Specifically we don’t know whether it became available for purchase five months previously after a deadly raid. Was the Arab home’s destruction an act of reprisal to the terrorist’s family? Was this tunnel the entry and escape route? The author provides no critical thought. The real Joshua would have experienced enough terror raids and known enough of his country’s history to understand that these are the enemy of his people.

A distorted view of the Samaria analog

Joshua enters the village’s open-air market that is “strange and depressing,” evoking the reader’s pity. The author never explains why there is poverty and squalor despite the enormous funding given Palestinians by the UN, EU, America and Israel. For one, it supports the narrative of victimhood, as during the same years that Israel advanced and flourished, the handouts to Palestinians removed all motivation and challenge to achieve as well. For another, it is common knowledge that those who receive the foreign income, reroute it to fund terrorism. They send it to the families of martyred murderers. And they buy the many thousands of missiles fired into Israel, 2,600+ rockets and mortars during 2018/2019 alone. Joshua sees broken streets, stagnant puddles, underfed people, and the kindness of a girl who saves him from the violent rock-throwing teenagers.

She, Leila, gives him her father’s Palestinian scarf for identification security (the boys would attack him if he were Jewish) and flip-flops to replace his lost shoes, and guides him safely to the chain-link fence. He has lost the flashlight, but gets through the dark tunnel. He remembers his father who died in combat, but the narrative never identifies his combatants as Palestinians. No Tom Sawyer and Huckleberry Finn adventure, this is a propagandist tale with purposeful omission of pertinent facts.

No mention of why the Palestinians even remain

He sees the stray ball as he exits the tunnel and returns home, immediately secreting the scarf and sandals. His mother was worried and his stepfather, Liev, explains the demolished house on the other side of the fence as one constructed on disputed land. But he says nothing about the dispute itself.

We never hear that these Arabs, now self-identifying as Palestinians, were not welcomed back to their ancestral Egypt, Lebanon, Syria, Iraq and Jordan when their armies lost their aggressive war against Israel in 1967. They have been abandoned until the Arabs may one day realize their dream of securing all Israel as their own. Hence, they are determined to never negotiate a peace agreement with Israel. Furthermore they will continue Mohammed’s 14-century vendetta until their last breath, even to the sacrifice of their own children. At this time, Liev should have reminded his stepson of Israel’s history. But Sutcliffe allows no such information to enter the storyline.

The Arabs want Samaria back, so they omit why Israel should have it

Later, when Joshua and David speak of their future in the IDF, Sutcliffe once again omits any conversation about one day protecting their own families and country from invasion and slaughter by another generation of Palestinian terrorists. The Arabs cannot bear to have anyone living on land they illegally claim for themselves, and the author obliges. This is their strategy when they cannot conquer militarily.

Fraternizing with the enemy…

Joshua pines for the girl in Samaria and he begins a series of trips there and back to see her. During one, he reflects on the checkpoints and the variety of license plate colors. This insinuates that these are methods of segregation, which is again fallacious. The colors represent areas, just as American plates define areas. However, in Israel the colors also serve to distinguish an alien car driven by an infiltrating terrorist. At the same time, the author uses Joshua’s voice to insinuate his own opinions of facial expressions of Palestinians who queue up to cross the border – patience and rage, weariness and defiance, pride and helplessness. He circumvents the point that if these people were not dangerous, there would be no need for checkpoints.

More distortion about life in Samaria

On one occasion, we learn more about the violent boys, who throw rocks at Israeli vehicles, too often causing fatal accidents. This has been the reason for Israel to build new roads for Israelis, to enable driving out of harm’s way. On another, the author feeds Palestinian victimhood by saying they have no aspirin. Yet there is no credibility to the allegation. Aspirin is not a controlled substance and should certainly be available throughout Judea and Samaria.

On future visits, while Joshua tends olive trees for the Leila’s father, he pensively reminisces about the few hundred years of care given these trees by her ancestors. Sutcliffe does not provide the same opportunity to consider the thousands of years of Joshua’s Jewish ancestors on this same land.

The story ends with an unusual circumstance and drastic changes that baffle me. But it furnishes a reason for Joshua and his mother to leave Liev. They return to a small apartment in the old seaside town. As he feels the olive seeds in his pocket, Joshua hopes to one day plant and tend his own olive grove, and perhaps see Leila again.

So here we see:

Nazi Germany and Stalinist Russia used these same thought-control techniques. With these they tried to shape the values, beliefs and attitudes of future generations in their quest for global domination. These books of deception are part of a patient advocacy of Islamic ideology and incremental social changes that prepare the students to accept Islam over every other philosophy or worldview.

“West Bank Wall” by ChrisYunker is licensed under CC BY 2.0

“Essential Workers:” The Government and The Mainstream Media Have The People Talking Like The Political Prisoners Under The Third Reich

A Journal of the Plague Year – The Courage to Do Nothing