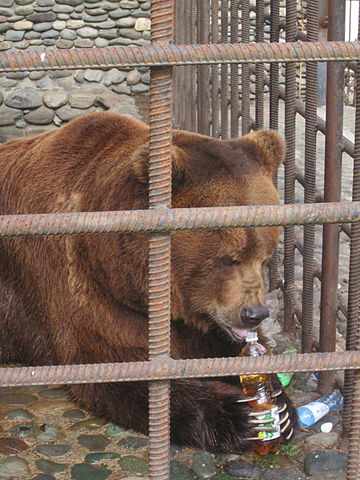 The Soviet Union made the bear a symbol of communism, because it began as a symbol of Russia. Today we see large corporations, in America and elsewhere, trying to feed the bear. Whenever they give preferential treatment to the expression of communist and other leftist ideas, they feed the bear. And now the bear is starting to bite the hands that feed it.

Seattle, Washington made itself the case in point. Last month, of course, the Mayor and city council of Seattle let leftist activists set up a foreign country in their city. They called it “Capitol Hill Autonomous Zone.” They changed the name later, maybe after someone told them they were flirting with treason. In that Zone, a warlord (Raz Simone) took over and:

But Mr. Simone blew the gaffe, or let someone blow it. Some person or persons unknown laid siege to the Mayor’s house. In response to this act of war, the Mayor ordered the police to invade.

Don’t feed the bear or the dragon

Linda Goudsmit offers this excellent analysis of the real issue.

She explains what communism is all about:

Marxist-Leninist teachings have their roots in the false premise of collectivist, common ownership. Mao’s collectivist proletariat ownership is not equivalent to private property ownership in free market capitalism. Communism’s common ownership exists in theory only because the Communist Party controls production and distribution of all goods and services. This means that no individual can buy, sell, or profit from anything that any individual produces. In practice, the party owns everything, including the citizens. The centralized government has absolute and total control of the people. The fatal flaw of theoretical ownership is that it leaves no incentive to work.

In this light, any executive officer of any business, however organized, must ask himself an important question. At what price do I cooperate with people who scream for communism? Or: if I feed the bear, will the bear refrain from mauling me?

Feed the bear, and it will maul you

Jeff Bezos, founder and CEO of Amazon.com, is about to learn this lesson – if he can appreciate it. Again from Seattle comes an explicitly communist proposal.

It began with the Amazon Tax. Amazon here refers to the giant company, not the river in Brazil. The International Business Times describes this tax: a payroll tax aimed directly at Amazon. This tax passed 7-2 last Tuesday (7 July) and will take effect next year.

But Kshama Sawant, chief sponsor of the bill, did not stop with its passage. She ranted and raved at Bezos – and revealed her true goal.

I am Mama Bear; hear me roar

Herewith the best transcript of her rant:

I have a message for Jeff Bezos and his class. If you attempt, again, to overturn the Amazon tax, working people will go all out in the thousands to defeat you. And we will not stop there. Because, you see, we are fighting for far more than this tax. We are preparing the ground for a different kind of society.

And if you, Jeff Bezos, want to drive that process forward by lashing out against us in our modest demands, then so be it. Because we are coming for you and your rotten system.

We are coming to dismantle this deeply oppressive, racist, sexist, violent, utterly bankrupt system of capitalism. This police state. We cannot and will not stop until we overthrow it, and replace it with a world based, instead, on solidarity, genuine democracy, and equality: a socialist world. Thank you.

Jeff Bezos, do you get it now?

“Modest demands”? Never mind how modest they are, or aren’t. Let’s examine first Jeff Bezos’ behavior of late. He, directly or through various underlings, has:

That’s how you feed the bear. Did he really expect the bear not to maul him? The mauling is happening now. He has less than half a year to do the obvious thing: move out of Seattle.

Note that this same Kshama Sawant (idiot savant?) took part in the act of war against the Mayor’s house. The Mayor, too, has had to learn: feed the bear, and the bear will maul you anyway.

A lesson for us all

The one pleasing thing about recent events is that the communist bear has dropped all pretense. Earlier, they could fool the people into denying or ignoring their goal. They simply did not press the matter in such a forthright manner. Now, however, they are pressing their demand: to abolish property and hold all things, and people, in common.

So Jeff Bezos, and every social media operator, should get the message: don’t feed the bear anymore.

Of course, CNAV can’t convince the bear. If the heads of Alphabet, Inc. (Google, YouTube), Facebook, Twitter, and Spotify want to compete for the title of Secretary of Information in the Union of Soviet Socialist Nations, none can stop them.

But then we all can stop feeding the bear, by decamping from those companies.