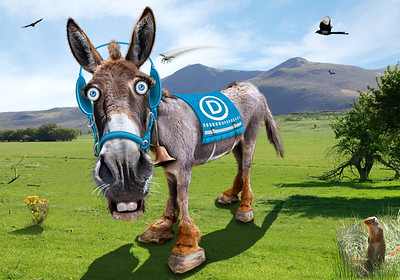 The recent death of Justice Ruth Bader Ginsburg (Ginsburg J) highlights the most stark divide in America today. Those who, since George C. Wallace of Alabama, always insisted that “there’s not a dime’s worth of difference between the two Parties” can now eat their words. For the Democrats, reacting to Ginsburg J’s death, have revealed their inveterate enmity toward the Constitution. One need only read the text of their reactions to know what they hold dear. And they do not hold the Constitution dear at all.

The Democrats made the Supreme Court a battleground during the administration of Franklin Delano Roosevelt.

Roosevelt’s new labor laws, that violated property rights and set the stage for decades of labor strife, started the war. The Supreme Court said a resounding NO to the National Labor Relations (Wagner) Act and similar acts. So Roosevelt proposed to enlarge the Court by six Justices. First he said the Court needed the extra Justices to handle its workload. Then he brought out the real issue:

Congress balked. But Roosevelt won in the end. Justices of the Supreme Court do not gain immortality with their black robes. (As devotees of Ginsburg J now know only too well.) Roosevelt, serving longer than any President in history, simply outlasted them all. Before he died, he replaced eight of the nine members of the Court, in addition to elevating one sitting Justice to the role of Chief Justice. Only President George Washington appointed more Justices. And that only because George Washington, as the first President, had to fill a Court that then had two more Justices than it has today.

Democrats get their dream Chief Justice – from a Republican President

The liberal Supreme Court dates from the Roosevelt administration. President Dwight D. “Ike” Eisenhower would complete the warm-body replacements on the court by appointing five Justices. The Chief Justiceship of Earl H. Warren1 began with Ike’s administration. Today it stands as a byword for the Constitution becoming “a living document.”

And what did the Warren Court do?

CNAV doesn’t take as strong an issue with the Warren Court’s criminal-procedure rulings (Miranda v. Arizona, Elkins v. United States, Gideon v. Wainwright, etc.). If these and similar rulings let criminals walk free, then society should permit people to arm themselves to resist them. But gun control effectively bars this.

Republican Presidents, beginning with Nixon, tried to make the Court the conservative, put-on-the-brakes institution it was before FDR. The Democrats now fear that the likely appointment of Amy Coney Barrett to the Court to replace Ginsburg J will complete that re-transform. And they do not want that to happen.

Why do the Democrats fear a conservative Court so?

Remember their platform and its premises:

The abortion issue – and Ginsburg J on population control

Add to it: abortion on demand up to and past birth, without apology. Not all Communist countries promote abortion on demand. Soviet Russia restricted it. But the People’s Republic of China forces it. Why? Because while the Russians wanted their women to birth the next armies of conquest, the Chinese saw babies as useless eaters. And Ginsburg J would have sympathized. Mollie Hemingway looked at her specific statements on this issue in The Federalist, back in 2014. And in particular, Hemingway found this quote:

Frankly I had thought that at the time Roe was decided, there was concern about population growth and particularly growth in populations that we don’t want to have too many of.

Ginsburg J had never before made a more arrogant and pompous statement. But she would later—perhaps.

Why didn’t Ginsburg J resign when she had the chance?

Democrats everywhere bitterly asked that question with the election of President Donald J. Trump. They started asking it again when Ginsburg J died.

Ah, f___ing sh__, you guys!!! I’m driving your car, when I just got a notification that Ruth Bader Ginsburg died. F***! Could this year get any f___ing WORRRRRRRSE?!? Ruth!!! You just had to make it to Twenty Twenty-one!!! [Deep breath] AHHHHHHHHHHHHHHHHH!!!

CNAV must ask: did this motorist have a traffic accident? If she wants to kill herself, no law should say no. But that does not license her to put others at risk while doing it.

Any rational adult should decry such a display, both the tone and the sentiment that motorist expressed. But the “mystery” of Ginsburg J’s refusal to resign during Obama’s term of office reveals one of two things to decry even more loudly.

A year and a week ago today, she faced that question, “why didn’t you resign,” and shot this one back:

Who[m] would you prefer on the Court [rather] than me?

And more to the point:

Who[m] do you think that the President could nominate that could get through the Republican Senate?

All very well, except for one problem. Barack H. Obama II did not lose the Senate until 2014. Why, then, did she not resign earlier?

My friend and contributor Darrell L. Castle found this statement that her daughter made to The New York Times.

Rather than try to breach a pay wall, I will repeat Mr. Castle’s paraphrase here:

[S]he said that her mother was certain that Hillary would win election. And she wanted the first woman president to appoint her successor.

What a God-awful, arrogant, asinine statement to make, if true. If Ginsburg J truly did make that statement, then perhaps she truly did leave this “dying wish”:

that I will not be replaced until a new president is installed.

We have no independent corroboration that Ginsburg J made either statement. So if she did not make those statements, we must decry her family for lying. But if she did make them, that makes her even more asinine than are Democrats generally these days. How dared she sully her robes by throwing such naked politics into the question of her succession? That comes close to a violation of 28 USC § 455. Which orders a judge, Justice, or magistrate to disqualify himself from hearing any matter in which someone might “reasonably” ask whether he can judge the case impartially or not.

Happily, 28 USC § 455 need no longer apply. Ginsburg J has died. So now the Democrats want the seat to stay vacant until next year. When—as they hope—they dream—a President Biden (or an Acting President Harris) will nominate her replacement.

Why should they feel so strongly about that? Maybe because they had a Fix in, or thought they had, with universal mail-in balloting. Already Citizen Journalist James O’Keefe has developed actionable evidence of a ballot-harvesting ring in Minneapolis, Minnesota. Democrats Joe Biden and Rep. Ilhan Omar (D-Minn.) benefited from this ring. Certainly this matter would reach the Supreme Court, for the Presidential election aspect alone. However Ginsburg J would have ruled, a Barrett J would definitely rule against the Democrats in this matter.

But the Democrats have another, plainer motive. Because they know that they pursue an unconstitutional agenda. And a Barrett J will likely so rule. Currently they express their greatest worry about abortion on demand. But they have many other worries. Gun control, the “Affordable” (sic) Healthcare Act, all have highly dubious constitutionality. And they know it.

Excuse me? The Constitution out of date?

Furthermore, Ginsburg J knew it, too. She defied the Constitution openly, calling it outdated!

I would not look to the US constitution, if I were drafting a constitution…. I might look at the constitution of South Africa. That was a deliberate attempt to have a fundamental instrument of government that embraced basic human rights, had an independent judiciary…. It really is, I think, a great piece of work that was done.

As anyone can discern by reading her decisions, Ginsburg J’s notions of “basic human rights” were not those of the Constitution of the United States. Our Constitution fundamentally protects life, liberty and property. The South African Constitution mandates handouts (for which others must pay), and treats “the environment” as a grand common. Thus it again violates property rights.

But all this went to her philosophy of government, one that Democrats share. She regarded government as an agent of change. No record exists of her uttering phrases like “New [Communist] Man.” But she might as well have uttered it.

All of which to say:

I say five because I do not count Chief Justice John Roberts. His opinions display personal spite against the President. That places him in violation of 28 USC § 455. In a sane world, that would constitute grounds to remove him from the bench on impeachment for and conviction of the high crime and high misdemeanor of refusing to disqualify himself when he cannot rule and act impartially.

So that leaves us, as CNAV hopes, with Alito, Barrett, Gorsuch, Kavanaugh and Thomas JJ. And, we can hope, with a better CJ than Roberts, plus replacements for Breyer, Kagan and Sotomayor JJ. That likely worries the Democrats worst of all.

1 Earl Warren, former Chair of the California Republican Party (1932-8), qualified as a “RINO” before “RINO” became a current acronym. (RINO stands for Republican In Name Only.) Ike would later call his nomination of Warren his greatest Presidential mistake.

Another Federal Judge Rules That Coronavirus Shut Downs Are Unconstitutional – Of Course They Are!

[…] nomination of Amy Coney Barrett to take her place, makes them burn with white-hot […]