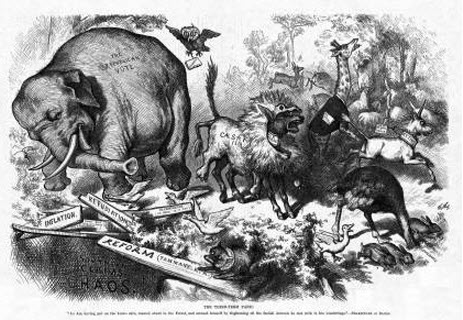 Thomas Nast, drawing first for Harper’s Weekly, gave the Republican and Democratic Parties their mascots, the elephant and the donkey. To Nast, the two animals represented everything he thought characteristic of each Party. In selecting the donkey for the Democrats, Nast relied chiefly on the savage election campaign of 1828. Then, the new Whig Party, a split-off faction of Madison and Jefferson’s original “Democrat-Republican” Party, called candidate Andrew Jackson a jackass; hence the donkey. Thereafter the donkey represented stubbornness, irrationality, illogic, and sometimes petulant refusal to follow any leader, no matter how wise. Contrariwise, the elephant represented a high vantage point for fighting a successful battle and war. But only when Thomas Nast used elephant and donkey together did the public indelibly associate those two animals with Republicans and Democrats.

In a sense truer than Thomas Nast might ever have suspected, the donkey is the appropriate mascot for Democrats. Because one can only describe their behavior, certainly in this century and arguably since George S. McGovern, as: asinine.

What makes consistent Democrats asinine? Start with their platform. But don’t read the platform for any given year. Instead, read how the platform has moved further from reality with each succeeding Presidential campaign. While you’re at it, listen to Democrats speak about any issue.

This platform, to the extent any outsider may infer it, relies on these premises:

Social credit depends, of course, on critical theory as it now exists.

Play this video of Senator Dianne Feinstein, Jenny-ass from California, demanding that “Mr. and Mrs. America” turn in their guns.

Incrementalism, or how to get a little more asinine every year with nobody noticing

A time traveler from the late Sixties, and especially the Democratic National Convention of 1968 in Chicago, Illinois, might blink at the above. Indeed the Democrats still haven’t become quite asinine enough to demand all the above today. Because they have always practiced incrementalism.

Incrementalism means what it sounds like: take a little bit of the people’s liberties and property rights, then a little more, then a little more. Every year represents a slight change from the year before—slight enough to defend by throwing the word extremism at their opponents. (Hence their term progressive for themselves.)

But in 2009 Barack Hussein Obama II abandoned incrementalism. He demanded Congress pass what he wanted now. Today. This instant. Which lost him the House of Representatives in 2010 and the Senate in 2014.

Case in point: the Waxman/Markey/Kerry/Boxer Cap and Trade Scheme of 2009. Obama told everyone to expect to pay more for electricity. He boasted of this. And he almost got it through a Congress under total Democratic control.

But then an alert British correspondent shared with your once and future editor a place where he could obtain evidence—in the form of a ZIP archive—that the entire narrative behind Cap and Trade had its basis in scientific fraud. And the rest made history.

Flying in the face of the evidence

Yet the “scientific establishment” excused their behavior completely. First they used the defense of the fraudulent tailors in Hans Christian Andersen’s “The Emperor’s New Clothes.” They described their “tricks of the data” as dishonest only in the eyes of stupid or unqualified people. Second, they offered the Precautionary Principle. Why, they asked, keep pouring into the atmosphere a trace gas never before present in amounts they claim to measure? Never mind that this Earth has experienced warmer temperatures in the Middle Ages than today. They flatly deny this. And they continue to promote the dire Climate Manifesto, that has its basis in Marxism.

CNAV will not necessarily decry any action by private individuals to address this soi-disant problem. When entrepreneurs, employing engineers, set out to solve a problem, they create a product and persuade people to buy it. As long as they rely on the attractiveness of this product, none can object to their methods. Especially when, by such methods, they address real problems, like the direct poisoning of the air, land and water. But to forbid people to buy certain products—that sort of method CNAV finds asinine.

The methods of the Democratic Party this year go beyond forbidding the sale of particular products. They allow, even encourage “have-nots” to dispossess the “haves,” often by violent force! We see this in Portland, Ore.; Seattle, Wash.; Minneapolis, Minn.; New York City; Chicago, Ill.; and Richmond, Virginia, among other places.

In short, the Democratic Party has chosen to support a new kind of revolution. A revolution targeting absolutely anyone who owns anything except the most intimately personal of goods.

And how do Democrats encourage such behavior? By passing resolutions to defund the police in the cities they run. And by acceding to rioters’ demands. For this reason did CNAV encourage the President to crack down on such behavior. For had that not happened, a new class of vigilance committee would certainly have arisen to do the job for the derelict government. And that might still happen.

Contributor Joan Swirsky guessed that the Democrats have a mental problem.

But even the most competent psychiatrist can’t fix asinine. Furthermore, nothing that any therapist can do, will countervail against what the client will not do. Which is: to get wise to himself1 and cease and desist from asinine attitudes and behaviors!

The only way to stop the asinine – with your vote!

The Election of 2020 already has begun, thanks to the Contagion That Shall Remain Nameless. (In Virginia, county and city registrars started accepting votes in person on 18 September.) For anyone not a jackass (or a jenny-ass), one clear choice remains. Vote against the asinine! Vote for the rational and the logical.

1 Spare me the demands that I use third-person singular pronouns of common gender. Such pronouns don’t exist in the English language.

Who Should Replace Ruth Bader Ginsburg?