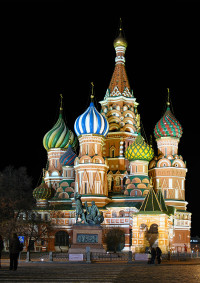 Hello this is Darrell Castle with today’s Castle Report. This is Friday, the 16th day of April in the year of our Lord 2021. In this report, I will focus on foreign policy, especially Russia, since Washington is once again rattling the sabers, threatening, and bullying those abroad. China and Iran are also problems, but I will save those problems for another day. I recommend my Castle Report of August 23, 2015 entitled The Mind of Russia, as a good background for this Report. You can find that article here.

The Castle Family is doing just fine right now living the good life here in the southern spring far from the virus. There is no illness in this family that we know of not even in Los Angeles. I will admit to encouraging my family to be careful and proceed with caution during this time since both Joan and I are past the age of 65. Overly cautious perhaps, but as family leader I thought it best and so far, so good.

Logic and truth have ceased to matter regarding Russia

Joan and I were riding to work in her car on Wednesday of this week, when I asked her why logic and truth did not seem to matter anymore. She was stumped by my question, but we continued to debate it with me giving her one example after another of how illogical the premise of this society seems to be. Just from a foreign policy standpoint I question whether anyone in government cares about what is best for America and the American people. Whether the subject is virus or Russia, the decisions lack logic, truth, and even common sense.

The leaders of other countries appear to act in their own best interest, so why can’t our leaders do that for us? I suppose it makes more sense to them to concentrate on how diverse the cabinet is than to worry about destruction of the currency, offshoring of manufacturing jobs, and such mundane things.

Why isn’t the United States working with the Russians to create an alliance to contain Chinese Communist expansion, instead of stupidly placing sanctions on virtually all Russian production? Maybe because Washington developed an attitude after the fall of the Soviet Union that Russia is no longer a great nation to be respected. So, Russia and Russians get sanctioned because when you control the world’s financial system you can do that, but it is just a passive act of war. It also allows the Chinese Communists to paint us with moral equivalence which is a lie that Biden apparently doesn’t have the ability to refute.

The United States no longer honors the Intermediate Range Ballistic Missile Treaty with Russia and so it feels free to move rather short-range missiles to the borders of Russia. What difference does it make where the missiles are located since the US submarine launched ICBMs could hit any target in Russia within about 15 minutes? The answer is that the intermediate range missiles do not give 15 minutes of warning and in theory could annihilate Russian nuclear capability before they could retaliate. That makes Russians nervous and constantly on guard.

The Biden Administration seems to be courting disaster around the world, and does not appear to be concerned about a military confrontation in Russia’s backyard. That attitude is stupid, and reckless, especially since the ability to back it up is questionable. Would Joe Biden or whoever runs that administration be willing to take the United States to the edge of war with nuclear armed Russia over Ukraine? The answer appears to be yes although when Russia threatened to close the Black Sea the two American warships patrolling there were withdrawn. It is better to pick your battles and stand firm than to bluster then back down.

The United States is reportedly considering membership in NATO for Ukraine. That would be the stupidest foreign policy decision since Hitler invaded Russia. Russian troops currently occupy the eastern region of Ukraine therefore a NATO membership could involve military action by the US to drive the Russians out. That would be madness of the highest and most obvious degree. Putin has been rather patient through Biden’s public insults and lies, but for how much longer. It is rumored that Washington has given Ukraine a military guarantee of protection and if so, that is evidence that someone in Washington is a raving lunatic.

Putin – a real war leader and descendant of a warrior race

I’m afraid that those who possess power and influence within the United States Government such as supposedly Joe Biden and Kamala Harris have seriously misjudged Vladimir Putin. It is not a favorable comparison when one considers the characteristics of a good war leader. Putin is descended from Mongols who occupied Russia for over 200 years thereby infusing Mongol DNA into the Russian bloodline forever. From Genghis Khan’s Mongols did Russia get much of its top-down centralized approach to government and military operations. There is no reason whatsoever to insult and defame that man especially with the leadership Washington does not seem to have.

Is the real power in the Biden administration Barack Obama and Susan Rice as the rumors constantly suggest? I don’t know the answer to that, but if they are, then they are doing a very poor job of leading a shadow government. Someone with a functional brain needs to back the lunatics away from the brink before its too late. End the sanctions against Russia and let that country sell its oil as it chooses. That would be a good start to negotiations but with all the mistrust and insults it may be too late for deal making.

Russia has four divisions each in Ukraine and Crimea

Russia has an estimated 40,000 troops in Ukraine and 40,000 in Crimea and has given the US a similar message concerning those areas. What if Russia put Intermediate Range Missiles in Mexico and Canada? Do you think that would make Joe Biden nervous? With this president its hard to tell, but with a rational person it certainly should, make the president nervous enough to at least listen to someone who understands that Vladimir Putin is not some imaginary gang banger you created for media hype.

He is a descendant of 200 years of the Mongol occupation of Russia. To some degree the Communist Chinese have a similar history. My point is that these are not weak Middle East countries with weak leadership that Washington can invade and conquer. Someone who might still be lucid in Washington should explain that to Washington’s elite so they can get back to ruining their own country.

Biden (I’m going to say Biden since I don’t know who is actually in charge), missed Trump’s May deadline for the withdrawal of all American troops from Afghanistan, but has announced a new September 11, deadline to replace it. That date is supposed to coincide with the date 20 years after the 9-11 attacks and I suppose that is where Biden gets his boast that we will win. Do you really think he is that delusional? If he is then that is even more frightening.

The Washington Post has announced its endorsement of the new date in glowing terms. Barack Obama has said that Biden is doing the right thing. I will be happy if the new date brings the military entirely out of that country, but I don’t believe it will happen, at least not on time, and not entirely. The Taliban has been waiting and will continue to wait and so why delay, but we will see.

When I say that Washington no longer has the strength to bluster and bully others, I am referring to the weakness of the United States as a manufacturing nation. To have real security and real wealth, you must make things that benefit others and that others want to buy. For example, because of its manufacturing dominance, the United States was never capable of losing World War ll and did not have to consider defeat as a real possibility.

The Pearl Harbor attack in December of 1941 left the US with no battleships and only three carriers in the Pacific Fleet, to the Japanese 6 carriers and 11 battle ships. From the date of the Midway battle where the Japanese lost 4 carriers, for the next year the Japanese built 6 carriers and the US 14. The following year the Japanese built none and the US built 50. In Europe when the war started the US had no long-range bombers and only 8 pilots. Nearing the end of 1943, The US held complete air superiority over Europe and have never surrendered it since.

The point is that the United States could sit on the North American continent, protected by its oceans, and crank up its industry to the max and no other nation on earth could match it or even come close. Now, by contrast, the US no longer even has a manufacturing base. This country makes nothing except fake dollars and fake math to make its people believe the lies. Since we are dependent on others for everything except the fake computer blips represented by $28 trillion of debt and a completely dependent population, perhaps we should understand that we can no longer swagger around the world as we once did. Other countries are starting to recognize the reality of that scenario and call Washington’s bluff.

From skill to bluster

Right now, it is unclear how Biden plans to handle foreign policy since he backed down in the Black Sea, but his tendency to just do the opposite of what Trump did is rather ominous. Trump put the Europeans on notice that they would have to start living by the terms of the NATO treaty and provide the means for their own defense. He tried to get them to lessen their dependance on Russian gas by canceling the Nordstrom pipeline project and making long term strategic plans for the defense of Europe without handouts. Not everything Trump did foreign policy wise can logically be argued as bad.

Biden’s bluster and threatening attitude toward Russia as evidenced by his continual comments such as, there will be consequences, etc. Putin must have been stung by having Biden’s you have no soul, and you are a killer comments. When Trump was asked to consider examples of when Putin had killed people, he pointed out many examples of how American governments had done and was still doing similar things.

A new anti-American (or anti-Biden) alliance

The Chinese, Russians and Iranians have entered a strategic alliance against the United States. The statement coming out of their first high-level talks said in part, “all human rights are universal, indivisible and interrelated. International law is the cornerstone of the development of human society.” Translation into non-diplomat: Forget those Uyghurs we are imprisoning and committing genocide against and just remember that we will not be bullied by the US anymore, oh and by the way we are going to develop an alternative to the US controlled dollar based financial system which will leave the US with nothing but debt.

Finally, folks, this all seems rather unbelievable, but I assure you it is quite real. It’s just that it must be hard to rip apart the very fabric of your own country, destroy the morality of its people, and confront powerful foreign enemies at the same time.

This article first appeared on the author’s own site and appears here by permission. In addition to which, readers might enjoy this more recent article:

And one more thing!

More About Joe and the Jews