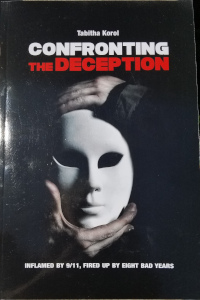 Lokesh Gupta, from Jaipur, India, wrote that if a baby elephant is tethered to a rope, it will never attempt to free itself from that bondage despite its growing strength to do so. This is conditioning, no different than what we see in our fellow humans.

I admit to my disappointment when I discovered a two-star review among the fives for my book, Confronting the Deception, with the only comment from Paul Wilson being that he considered it “hate speech.” Hate speech is defined by the Cambridge Dictionary as

public speech that expresses hate or encourages violence toward a person or group based on something, such as race, religion, sex, or sexual orientation.

Had Wilson been more astute, he’d have understood that in my extensively referenced book, I am actually combating hate speech. Namely, the animosity that is expressed toward our conservative values. It is obvious that the accuser defines hate speech as any ideas or news he opposes, with the hope of encouraging others to act in collaborative censorship. Elon Musk said,

They don’t ban hate speech; they ban speech they hate.

I suspect Paul Wilson has been trained over the years to accept only what he learned from his respected sources (school, media), which, sadly, are reflective of Communism, Fascism, and Islam. He will not read with an open mind or regard and discuss anything antithetical to his rooted comfort level. Furthermore he uses his freedom of speech to alert others to avoid and ban the speech they disapprove.

What was wrong with it? He didn’t say, but…

What might he have found so offensive? My disclosure of the Islamic ideology and historic imperialism by any means, including lies, forced conversions, invasion and conquest by bloodshed; the massacre of 890 million people over 14 centuries; the way it continues to this day through Islamic relocation; and overcoming the native population with migration and their harsh Islamic law. These are not opinions but facts that I thoroughly document and reference, and Wilson should be offended at the facts, not my readiness to expose them.

The label of hate speech is used to stifle unpleasant facts and, intentionally or otherwise, aid the enemies of America, just as, similarly, mainstream media secreted recent news of jihadi slaughter of 236 villagers in Niger; the beheading of 55 Christians and foreigners in Mozambique, their bodies left scattered in the streets; the shooting and killing of customers in a grocery store that sells Jewish food products; the vandalism of four synagogues in The Bronx. Wilson is the emotionally tethered elephant who sees only what his societal group stipulates he see, unable or unwilling to analyze anything on his own.

He would also be offended by my exposé of how the power-seekers have changed our schools’ curricula, manipulating our children at all levels; influencing the adults in local church and synagogue outreach programs, including the peaceful literati who attend pseudo-intellectual, indoctrination vacation spots, such as Chautauqua Institution; and mass communication that continues to produce fake news reports to sway their audience to the left.

Wilson has joined the Cancel Culture, a benign term for those who seek to annihilate all that America represents, and replace it with a form of totalitarianism that, in reality, is domination by an elite group of the astonishingly wealthy and powerful. He has absorbed the delusion that we, the masses, must all be regulated to sameness, regardless of growth and achievement, just as the elephant remains shackled despite his increased size and strength. Only the free-roaming elephant is unstoppable. Why is the human so easily hitched?

Today’s Wilsons have been conditioned by all that academia, the media, and so many clergy have promoted – restricting our freedoms even to the extent of damaging our environment and our people. Known as repressive tolerance, they are as eager to blindly accept new rules, restrictions, and a new narrative as they are to obliterate the memory of their own history, through all its representations – writings, buildings, monuments – as well as those who stand in their way. We see it in the 1.8 billion adherents (24.1 percent of the world population) who have long forgotten their cultures and language from before the advent of Islam, and in Communism’s firm control over 1.6 billion people in five remaining communist countries. And we watch as Palestinians continue to alter the narrative against Jerusalem and Israel to influence world prejudice for similar gain – obliteration and replacement.

Islamism and Marxism in America may not even have to formally brandish their swords. The end game is being carried out, beginning with the creation of a toxic environment, where the youth (soon to be adults) are divided into sensitive, vulnerable classes of mutual disrespect and contempt. Also known as identity politics, the singling out of meaningless differences is a divide-and-conquer strategy by the power-hungry elites to control and prevent the groups from (re)uniting under common purpose.

The left is using our own Constitution to eliminate our heritage and our freedoms by renaming sports teams, buildings, schools, and reducing our police forces, as the anarchists destroy memorial monuments and private property. The left uses the coronavirus, suspected of being biowarfare, to force lockdowns and curtail our freedoms of speech, assembly, and privacy. Their mask mandates, already acknowledged as ineffectual to harmful, have our population adjusting to Islamic face coverings.

Big Tech canceled customers, including President Trump, from using their communication systems (Facebook, Google/YouTube, Microsoft, Apple, Amazon), upon which the world has come to depend. The Patriot Act, an invasion of privacy, was used to spy on Americans, including our President. The government is now working toward forced vaccinations for the masses, contrary to the Nuremberg Laws. Are these not bold tyranny? We may well wonder when they will decide to change our country’s name. If the elephants remain psychologically hitched, they will be unable to join together as a significant force to save themselves from total socialism.

Who are the powerful and influential? Bureaucrats, corporatists, intellectuals, the military’s upper echelon, the media, and government swamp creatures who are in sufficient control to manipulate others, whether monetarily or by sympathy and threats. They embellish historic events to arouse accusations, defense, humiliations, envy, and anger, so as to elicit obedience, whether through speech or action, on the streets and in our government. Continually using catchword accusations, such as racism and hate speech, they foster imbalance and fear, and censor for control. The students, impressionable and vulnerable, are weaponized to turn against each other and, in fact, against their own families, all in the name of “social justice.” We see a reenactment of both Stalin’s Marxism and Hitler’s Nazism as our children are taught that the importance of the state supersedes that of their parents.

Their vocabulary is taking shape to comply with the party line, limited by fear, opinions remaining unuttered or withheld, tethered while the war evolves around them. What young child today has not heard of transgenderism, white privilege, social justice, masks and quarantine, but how many of our children know of sandcastles, fairgrounds, circuses, and trapeze artists? Our population is becoming quick to shut down whatever refutes the narrative, and teachers are advised that certain lesson plans need not be revealed to parents – which attacks our Tenth Amendment.

Early in the process of their acquiring control, the schools began training our youths to accept what they’re told without question or verification, proceed without thinking, considering, reasoning, or analyzing whether something is true or false. Today they are forcing The 1619 Project into the curriculum, a verifiably false narrative about our history. They offer “safe spaces,” a retreat of hot chocolate and Teddy bears for college students who are recoiling from reality and encouraged to remain immature. Universities, once the springboard for entry into the outside world, have become shelters from new ideas as well as places of propaganda, where lecture halls host only speakers who spew the leftist agenda.

…and now excuse-making with critical theory

The latest assault, racial identity, is upon the natural and deserving progression of students due to merit alone, with claims for needing equity, equalized outcome for undereducated dark-skinned children, and the reward of benefits regardless of merit. Those with higher grades, but white-skinned only, are said to be arrogant supremacists who earned those grades at the expense of others. In essence, inadequacies remain unaddressed and unchallenged, with children not getting the help they need. The quality of education is reduced to less than mediocre, and all are cheated merely because of skin color.

Rather than endeavor to find real solutions to societal ills and lower grades, the authorities sidestep the issues by blaming racism, the result being that the chains of control are tightened and tensions increased between the races. The Biden administration is carrying this further into society by its recent announcement that only farmers of color would get subsidies because of the coronavirus, although all farmers were suffering from the virus, blights, and weather conditions. It has just been announced that white farmers will sue the federal government.

Conditioned to lose our liberty

We have entered an era of totalitarianism, where the features of our fundamental freedoms, guaranteed by the Bill of Rights, are being severely eroded. We are losing our Freedom of Speech, upon which all other freedoms are based. The small accusations of hate speech; the school curricula that change our language, history, and even the children’s self-perception; the overt lies in the media, and the technocrats who thwart our interaction with others, work in tandem. To that, we have the manipulated voting ballots, an un-FDA-approved vaccination that we may not be allowed to refuse, and the virus masks and gathering bans that keep us estranged. We Americans are in the Valley of Decision: we must either meekly comply with our own enslavement or resist. The decision is ours … for now.

Breach of contract – grounds for Texit

I live in an occupied country