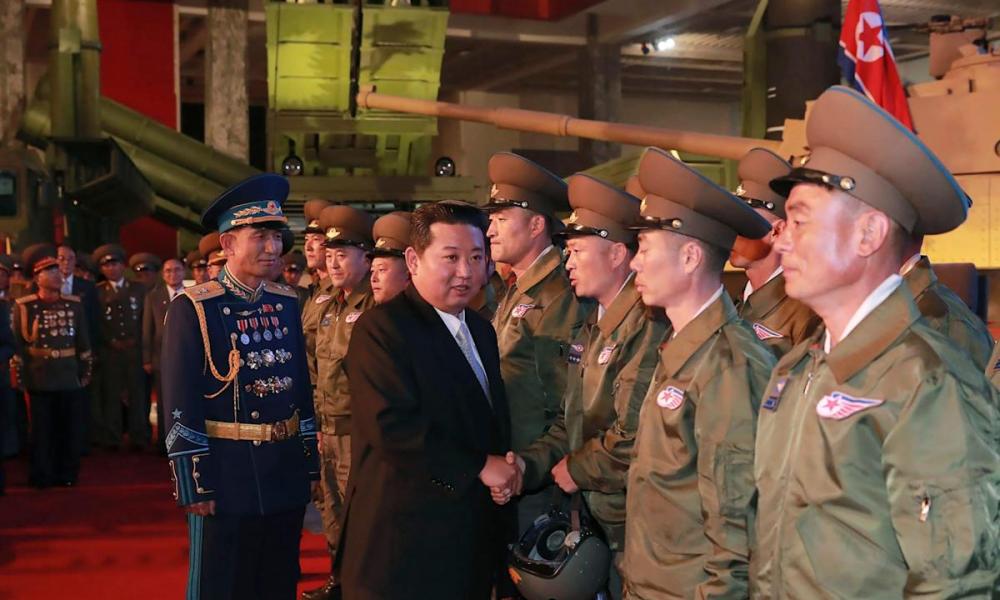 North Korea has released a video of ‘fierce-looking’, shirtless soldiers performing bare-handed stunts in the latest show from Kim Jong-un’s military. The soldiers put on a performance for the North Korean leader, who looked impressed and even smiled at some of the action movie-like stunts, during a “self defence” military exhibition on Monday.

The video was aired on North Korean television and the state media said it was to show the country’s enemies that it’s soldiers have an “iron first” to protect their country. A video from the event showed shirtless soldiers smashing concrete bricks with their bare fists, breaking out of shackles and bending iron rods with their necks. Bricks were smashed over soldiers’ heads and some men struck their colleagues with logs.

The video also showed a soldier lying on a bed of glass shards before another soldier places a concrete slab on his stomach and sledgehammers it into pieces. Mr Kim, his younger sister Kim Yo-jong and several other military officials were in the audience. The display came after Mr Kim vowed to make his country’s military “invincible” and called out the US and South Korea for persistent hostilities.

Sending mixed signals during his speech, the North Korean leader said the primary objective was to give North Korea an “invincible military capability” that no one would dare challenge, but that it should not be seen as threatening war with its neighbour South Korea or the US. “We are not discussing war with anyone, but rather to prevent war itself and to literally increase war deterrence for the protection of national sovereignty,” he said (Newsbreak).

China carried out beach landing drills in province opposite of Taiwan, its military announces