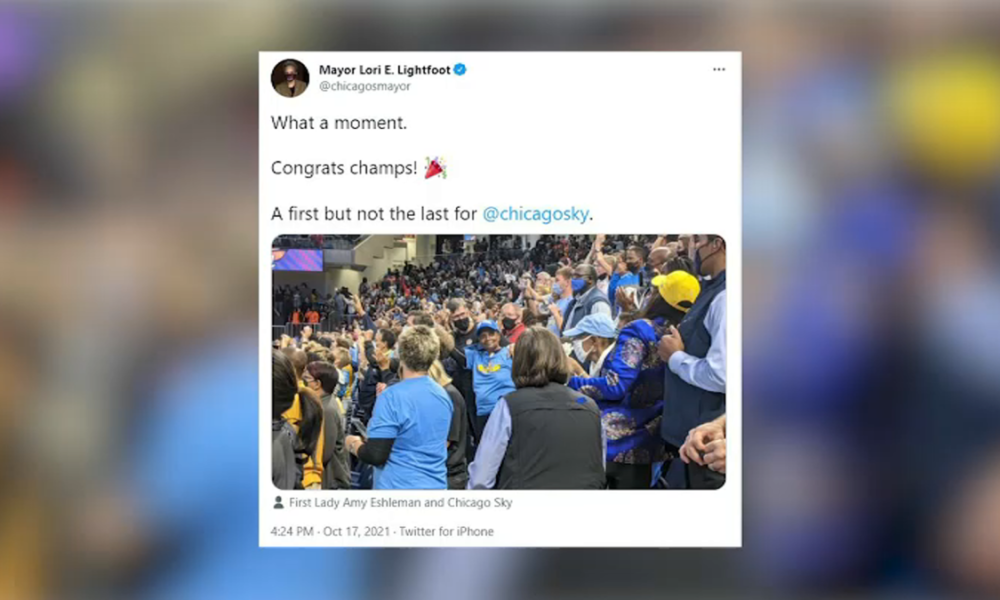 Chicago Mayor Lori Lightfoot appears to have violated both local and state mask mandates at the WNBA finals in the Windy City.

Lightfoot shared the snap of herself smiling, while surrounded by scores of fans – all of them masked – after the game at Chicago’s Wintrust Arena Sunday night. “What a moment. Congrats champs! A first but not the last for Chicago Sky” she tweeted while holding her arms in the air in celebration at Chicago’s first WNBA title with a 80-74 win over Phoenix.

Lightfoot’s photo was met with vitriol on social media. “That’s cute, but Illinois has an indoor mask mandate, regardless of vaccine status, ma’m. Where is YOUR mask?” one person asked. “I thought there is an indoor mask mandate in place? I guess not for everyone eh?” tweeted another. One television producer did make a case for Lightfoot’s mask-free picture. “I was sitting across from the mayor, she had her mask on the entire game, she pushed it down because the woman in the yellow hat was taking a photo,” wrote television producer Afua Owusu.

Chicago’s mask mandate went back into effect in August, requiring face coverings indoors for everyone, including toddlers as young as 2 years old, regardless of vaccination status. Dr. Allison Arwady, Chicago’s public health commissioner, said she hopes the mask mandate will be removed again by the end of 2021. “For the next few weeks, at least, it is here to stay,” Arwady said Sunday. “We’re a little over 300 cases right now, so when we’re halfway in that substantial mark, we will recommend taking them off.”