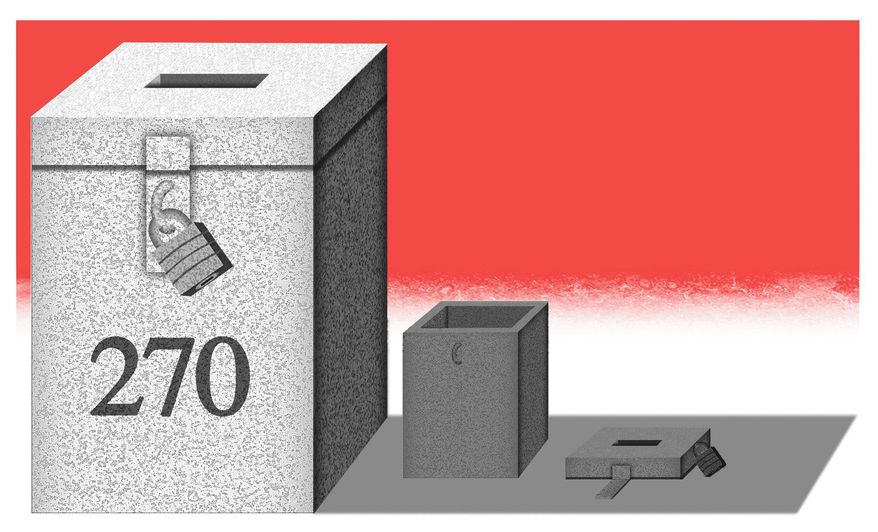 The year 2021 hasn’t even turned, and people already are speculating on candidates for President and Vice-President in 2024. We hear of efforts to dump Joe Biden and Kamala Harris, and no one believes Donald J. Trump would ever trust Mike Pence again. Therefore the Election of 2024 will not repeat the lineup of the Election of 2020. Which leads to an immediate question: who could run instead?

Joe Biden’s cognitive impairment is obvious now, even to a layperson. (For the record, your editor received the degree of Medicinae Doctor in 1985.) Even laying that aside, some Democrats were plotting to remove Biden even in January of 2021. Why? Because Barack Obama wanted Kamala Harris to be President from the start. That’s why the country heard a lot of loose talk about the Twenty-fifth Amendment. Specifically we heard about Section Four, which provides for a Vice-President to become Acting President with the support of most of the Cabinet. The problem would have been, of course, that Biden’s handlers would contest the declaration. And Congress would need two-thirds of both Houses to sustain that declaration. The Republican Conferences of both Houses might conclude that the senile dotard was safer than the power-hungry maniac.

Nevertheless Kamala Harris seemed to be plotting an Amendment XXV coup in August. Sadly, two Republicans in Congress also called for an Amendment XXV discussion. Long-time readers will remember that your editor told both men to shut up about such talk! Why? Because a weak President would make it easier to take powers back from the federal government and give it to the States.

Sadly, the Republican Conferences have squandered that opportunity. Maybe they didn’t see it as an opportunity for themselves. So Republican voters must primary such people.

How to get rid of Kamala Harris

But the Democrats have a problem, too. Kamala Harris is simply not popular enough even to win an election as dogcatcher! The Democrats know it, and Biden’s handlers don’t trust her anyway. So they want her to go away.

One wild story surfaced that Biden’s handlers were planning to nominate her to the United States Supreme Court! Of course they can’t do that unless:

Maybe that’s why we hear so much more about Court packing. Perhaps even the shadow oligarchy who stole the Election of 2020 does not dare assassinate a Supreme Court justice. (Again.)

Mike Pence has an obvious problem. He had the chance, on January 6, 2021, to reverse the theft of the Election of 2020. And in the face of the evidence, he demurred. Did he feel he had a conflict of interest, because his own job was on the line? No. He never liked President Donald J. Trump anyway, and all along intended to betray him. As Dave Hodges observed from the get-go.

There are growing concerns over Mike Pence and his obvious lack of loyalty. Pence is opposite of Trump in many critical issues, namely, free trade and Obamacare. Despite their differences, and very ironically, without Pence, Trump does not carry Wisconsin, Michigan and Ohio.

Yet, the manner in which Pence delivered the “rust belt” to Trump is suspect. He partnered with Paul “the rat” Ryan as he is often called. The Speaker of the House was never fully in the camp of Donald Trump.

Why, then, would Ryan and Pence team up and deliver victory to Trump? Simple, because Pence is now a heartbeat away from the Presidency in the same exact manner as was LBJ, who JFK hated, but needed. And the same can be said for Reagan and George H.W. Bush, who Reagan hated. If one follows the pattern of Vice-Presidential choices, and given Pence and his lack of loyalty displayed to President-Elect Trump during the dark days, we should all be concerned over our new champion’s safety.

Do you really think that the globalists are going to respect the rule of law? Do you think they are going to go away and accept the will of the people? The globalists hate you, they hate the common person. Globalists, like Ted Turner, outwardly express the desire to wipe out 95% of humanity.

As we now see.

No one seriously doubts that Donald Trump will run to get his old job back. But whom might he pick for a Vice-Presidential candidate? Let’s examine some possibilities:

Jared Kushner’s main tie to Trump is as his son-in-law. (He’s married to Trump’s daughter Ivanka.) He has a history as an economic adviser to Trump. Today he is a venture capitalist—sort of. But the American people do not and should not trust him. He and Trump were both Democrats until 2009. But while Donald Trump definitely embraced the Republican Party, Jared Kushner did not. CNAV does not recommend that Donald Trump offer his name in nomination, even if the two still have a family tie.

Amanda F. Chase represents the Eleventh State Senate District in the Senate of Virginia. Unique among self-styled Republicans in that chamber, Senator Chase refuses to pay Caucus Dues. She says flatly she will have no part in the pay-to-play game all other politicians play.

The John Birch Society can inform you that Caucus Dues amount to a legislator’s annual salary! Which is why legislators always seek affiliations with lobbyists who will replace that salary. Amanda Chase will have none of that. Such is her independence of spirit that in the last session of the Senate of Virginia, she refused to wear a mask. So the Senate enclosed her in a plexiglass box. And from that box she held forth, defiant as ever.

As another example of this defiant spirit, she attended the January Sixth Rally and made no secret of her attendance. Indeed, Democratic members of the Senate sought to expel her. That came to nothing. In fact she sought the Republican nomination for Governor of Virginia! Perhaps the only reason she lost was that the Republicans held their “convention” by collecting rank-order paper ballots instead of holding the usual kind of convention, with physical presence, face time, roll calls of the units (in Virginia a unit is either a county or an independent city), and opportunities to meet and greet. Nevertheless she lasted through five rounds of rank order vote tallying until the process eliminated her. Only Glenn Youngkin and Pete Snyder remained, and of course, Youngkin took the nomination in the last round.

After that, Senator Chase initially intended to challenge Rep. Abigail Spanberger (D-Va.-7th) for her House seat. Then the Special Masters of the Supreme Court of Virginia did two things to preclude this. First they redrew the District boundary so that Spanberger no longer lives in what is now the Fifth District. She will now challenge Rep. Rob Wittman (R-Va.-1st) for his House seat. Second, they drew another boundary so that current Rep. Bob Good (R-Va.-5th) now lives in the new Fifth District. Senator Chase has decided not to challenge him in the primary, but to campaign to stay in the Virginia Senate.

A more than viable candidate for Election 2024

Have a look, then, at what Senator Chase brings to the ticket. First and foremost, consider her loyalty. That loyalty arises from a fierce commitment to the same things to which Trump has committed himself. Indeed she repeatedly called herself “Trump in heels” during her primary campaign for Governor.

Furthermore, if recent rumors about Trump’s liking for the coronavirus vaccines are correct, Senator Chase can check this. If anyone can, she can.

But more than that, she has demonstrated her independence, and even defiance, of typical legislative practice. Her refusal to pay Caucus Dues should serve as a model for all legislators and Members of Congress. If Donald Trump really wants a like-minded partner to recapture the White House, he will find no better partner than Amanda F. Chase.

What will the Democrats do in Election 2024?

The Democrats have a variety of choices, but perhaps no viable ones. Any Democrat who could possibly win against Trump, won’t get the nomination.

Consider Jeff Bezos, founder of Amazon and Blue Origin. As much lip service as he pays to “the progressive agenda,” he has an execrable reputation among his workforce. When Amazon lost a warehouse in Illinois to tornadoes, Jeff Bezos never spared a moment to commiserate with the survivors of warehouse staff and delivery drivers who died in the tornadoes that wrecked it. One report even says a delivery driver had orders to continue deliveries in the teeth of the storm. Expect President Trump to mention this first. And second, Trump could make much of Blue Origin’s very undistinguished record in space.

We also hear of Rep. Tulsi Gabbard (D-Hawaii) as a possible Vice-Presidential candidate. She would likely never get the nomination. Her record of military service represents everything typical “woke” Democratic primary voters despise. Recall that she sought the Democratic Presidential nomination in 2020. She didn’t get it, very likely because Barack Obama didn’t want her to have it. And he won’t want her to have the nomination this time, either.

Will Barack Obama seek the nomination for either office? The Twenty-second Amendment won’t allow it. He can’t run for President, and, according to the Twelfth Amendment, he can’t run for Vice-President either.

The Republicans have no further decision to make. Nominate Donald J. Trump and let him pick his Vice-Presidential running mate. And if he’s smart (and she is willing), he’ll pick State Senator Amanda F. Chase from Virginia. He will pick her because they are two of a kind.

The Democrats are stuck. Not only are they going to lose Congress in next Midterms, but they have squandered all the political capital the shadow elite gave them. If they try to steal the election again, too many patriotic Officers of Election and accredited poll watchers will check that. And they simply do not have the candidates they need to win Election 2024 honestly.