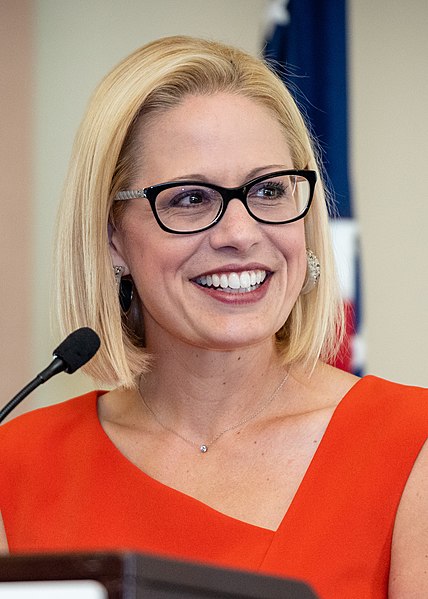 Senator Kyrsten Sinema (D-Ariz.) drew a formal vote of censure from the Arizona Democratic Party in a vote early this morning (22 January). Reports are in from the Fox station in Phoenix, Ariz., and the Fox News Channel.

Quotes from the censure resolution against Kyrsten Sinema

her failure to do whatever it takes to ensure the health of our democracy.

By which the Party chapter meant her voting not to change the rules to pass HR 1 and HR 4, two “voting rights acts.” Not only did she vote to sustain the rules; she also rebuked President Biden publicly for suggesting the rule change. After that, Biden blurted out that what was at stake was “who gets to count the vote.”

This quote from Raquel Terán, Chairman of the Arizona Democratic Party, speaks volumes.

I want to be clear, the Arizona Democratic Party is a diverse coalition with plenty of room for policy disagreements. However on the matter of the filibuster and the urgency to protect voting rights, we have been crystal clear. … In the choice between an archaic legislative norm and protecting Arizonans’ right to vote, we choose the latter, and we always will.

While we take no pleasure in this announcement, the ADP Executive Board has decided to formally censure Senator Sinema as a result of her failure to do whatever it takes to ensure the health of our democracy.

The ramifications of failing to pass federal legislation that protects their right to vote are too large and far-reaching.

The censure vote follows up on this resolution of support for passing those two bills by hook or by crook.

The censure itself has no practical effect. Perhaps one ought to call it a reprimand instead of a censure. A real censure would be like the one Rep. Liz Cheney (R-Wyo.) drew for her activities on the January 6 committee. That resolution says flatly that she may not call herself a Republican anymore. The vote in Arizona today does nothing.

But already a “primarying” campaign against Kyrsten Sinema is taking shape. The same Party that hailed her for taking the seat away from the Republicans, now wants to throw her out.

CNAV pours contempt upon the notion of “democracy” as the Democratic Party clearly means it. Democracy is two wolves and a lamb voting on what’s for dinner. Kyrsten Sinema cast a vote to uphold the rule of law. When she did that she opposed the mob, and now the mob has gone for her blood.

What should the Senator do next?

Senator Kyrsten Sinema could always change from D-Arizona to I-Arizona. Senator Joseph Lieberman, originally D-Connecticut, became I-Connecticut in 2006. The Connecticut Democratic Party wanted to nominate a thorough socialist, so Liebermann ran an independent campaign to keep his seat. He stayed in the Senate until 2013, when a “real” Democrat knocked him out.

Kyrsten Sinema has until 2024 to make up her mind, as her seat will not come up until then.

Could she switch parties, becoming a Republican? On one hand, that would really stick a thumb into the eyes of Arizona Democrats, and national Democrats. But the Republicans might not be able to trust her. She still paid lip service to the dangerous Democratic ideology. That she was not willing to change the Senate’s rules does not mean that she would support Republican Party ideas.

Those two bills, as CNAV has said before, would destroy the Republic. So she had no business saying she supported those bills “but only if they could pass according to Senate rules.” Some bills should not pass under any circumstances. CNAV doubts they would have stood in court – although court typically takes too long, and “justice delayed is justice denied.”

Nevertheless, she is, without question, a martyr for the rule of law, and for the Republic. The Arizona Democratic Party made her one. And when they did that, they testified against themselves, and convicted themselves of treason to what a Republic means.

Or to put it another way she upheld her Oath of Office to protect our Republic and the US Constitution. We are NOT a Democracy and this text is why the Founders of the US did not create a Democracy:

Democracy, n:
A government of the masses. Authority derived through mass meeting
or any other form of direct expression. Results in mobocracy. Attitude
toward property is communistic… negating property rights. Attitude toward
law is that the will of the majority shall regulate, whether it is based
upon deliberation or governed by passion, prejudice, and impulse, without
restraint or regard to consequences. Result is demagogism, license,
agitation, discontent, anarchy.
— U. S. Army Training Manual No. 2000-25 (1928-1932),
since withdrawn.

[…] that yesterday morning, Senator Kyrsten Sinema (D-Ariz.) drew a formal censure from the Arizona Democratic Party. Why? For “not doing whatever it takes” to facilitate voter […]