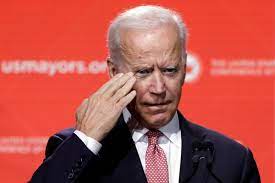 Hello this is Darrell Castle with today’s Castle Report. This is Friday the 21st day of October in the year of our Lord 2022. I will be talking about the energy policies of President Joe Biden and how he is desperately trying to hold down soaring fuel prices until after the Midterm Elections, with very little success. Because it is very hard to hold down energy prices even for a month without actually producing any energy.

Yes, it appears, according to The Wall Street Journal, that President Biden went begging to the Saudis for energy relief just before OPEC met on October 5th. The Journal reports:

Days before a major oil-production cut by OPEC and its Russia-led allies, U.S. officials called their counterparts in Saudi Arabia and other big gulf producers with an urgent appeal—delay the decision for another month, according to people familiar with the talks. The answer: a resounding no.

U.S. officials warned Saudi leaders that a cut would be viewed as a clear choice by Riyadh to side with Russia in the Ukraine war and that the move would weaken already-waning support in Washington for the Kingdom, the people said.

Saudi officials dismissed the requests, which they viewed as a political gambit by the Biden administration to avoid bad news ahead of the U.S. midterm elections, on which control of Congress hangs. High gas prices and inflation have been central issues in the campaign.

Instead, the people said, the Kingdom leaned on its OPEC allies to approve the cut, which is aimed at reducing production by 2 million barrels a day.

Yes indeed, American prestige is very high at OPEC right now as the Saudis leave the President of the United States looking weak and foolish from his own act of begging what amounts to an enemy or at least a hostile nation to save his control of congress. The Wall Street Journal rates this explanation of the call to OPEC as highly plausible.

The midterms are weighing heavily on the minds of the administration as their poll numbers shrink with rising gas prices. They had been enjoying a bit of relief at the polls with Biden’s releasing Strategic Petroleum Reserves (SPR) into the market. There is only so much oil in the strategic reserves. And Biden is apparently willing to use a great deal of it to buy votes in the midterms.

He announced another depletion in the SPR this week which according to industry officials would take the reserves to the lowest point since the early 1980’s. The usual White House press conference by Press Secretary Karine Jean-Pierre produced the usual mumbo jumbo about how it is all Putin’s fault and the fault of the oil industry and even reserved a little blame for gas stations hoping, I guess, that people are dumb enough to accept such nonsense.

Releases from the SPR are usually reserved for natural disasters or national emergencies so I guess faltering poll numbers and nervous reaction to the coming elections qualify as a national emergency. Reports are that the U.S. will have about 17 days of reserves left assuming no further releases. I should at least be fair to the administration though because, surprise, administration spokesperson Adrienne Watson vehemently denied that the call to OPEC had any political purpose at all.

She denied that Biden was driven by political calculations. “It’s categorically false to connect this to U.S. elections. It’s about the impact of this shortsighted decision to the global economy.” Yes, a very believable explanation indeed. The President is simply concerned about the global economy and that is why he made a personal appeal and why he was so angry and threatening toward the Saudis.

Once again, President Biden has left himself on the horns of a dilemma. He desperately needs energy prices to subside at least until the elections. However, his economic policies along with one of his chief goals being the destruction of America’s ability to produce energy make that all but impossible. The cost of energy is soaring because of his spending induced inflation, but also because of his numerous attacks on fossil fuels and the ability of the nation to produce them.

How Biden reduced our energy supply

He canceled the Keystone XL Pipeline immediately after taking office. That pipeline was scheduled to transport about 900,000 barrels from Canada to American refineries each day. The same day he canceled the pipeline he signed several executive orders curtailing energy production, including suspension of oil and gas leases on federal lands and offshore. He issued other orders for government agencies such as the Securities and Exchange Commission to act against energy producers. He canceled leases in the Arctic National Wildlife Refuge and in other areas of the country.

So, there is a long list of deliberate actions aimed at destroying American energy production, but he is willing to go hat in hand to the Saudis who refused to take his hand. He is apparently very interested in our environment but not at all interested in the Arabian environment. Now, he is very rapidly running the country out of oil in the SPR and that appears to be his last card. He announced a plan earlier this year to release 180 million barrels which will leave the SPR at its lowest level since the early 1980’s.

In any event there is a lot less oil to deal with actual emergencies than there was before he decided to deal with his political emergency. He has made us dependent again and it is such a terrible waste. We were completely energy independent and a net exporter just two years ago now we are reduced to begging a rather hostile nation.

Europeans foolishly did the same

Our European allies are not immune to President Biden’s follies, nor are they immune to their own suicidal green energy policies. European countries within the EU decided to go all out to convert to solar and wind energy. In response to that commitment, they shut down much of the world’s most high tech and clean nuclear industry. They also curtailed the production of fossil fuels including coal of which they are now desperately trying to import. The green energy commitment left them totally dependent on the import of Russian gas for which they had a reasonably priced deal with Russia.

Russia took three years and spent billions to build the Nordstream Pipelines to solidify the deal, but then Russia invaded Ukraine and sanctions were placed against Russian gas. Russia began reducing the flow through the pipelines I would suspect to show the Europeans what the next winter was going to be like. The Europeans didn’t get the message, so the gas stopped flowing completely. That is all the Russians had to do to stop the gas, just turn off the tap.

Did Russia really blow up its own pipeline?

We are now, however, expected to believe that the clever Russians blew up their own pipelines so they could not transport their gas. Danish authorities responsible for the investigation say that it was deliberate sabotage. It happened, by an amazing coincidence, just as many Europeans were reconsidering their relationship with Russia and talk of jumping off the American ship could be heard. The crises now threaten not only European industry and small business, but even the hospitals. The German Health Minister was quoted as saying that quick and decisive action was needed to avoid hospital closures.

Inflation adds fuel to the fire, if you will pardon the pun, and it has reached 10.9% in Germany, the highest rate since East and West were reunited. Inflation eats wages and French workers in Paris hit the streets to protest and to demand higher wages, and to demand the resignation of French President Emmanuel Macron. Understandable, but its result would be to make the problem worse except for the Macron part.

Why is Biden doing this?

I will leave Europe for now to its own devices and return to the energy follies of Joe Biden. His policies of deliberate destruction of American energy are about to hit the American people hard. The Saudis in conjunction with their Russian and other oil producing nations timed their 2 million barrels per day cut in production with the bottom of America’s SPR.

The central question then is why. Why does he beg hostile nations for their oil while he deliberately sabotages American production? He must be well aware that their methods of production are far less environmentally friendly than those of the United States. Why this energy sabotage when the U.S. and the American people are suffering but sitting on top of the greatest deposit of energy on earth? Why refuse to buy oil from friendly nations like Canada and instead go begging to hostile ones?

The answers to at least some of these questions lie within the mind of Joe Biden or those who control him, but we can at least speculate that an all-out commitment to the Green New Deal no matter the cost is partially to blame. He is on an ideological crusade that will ultimately make us all poorer, more dependent, and constantly subject to shortages and higher prices.

Yet another pointless crusade

In conclusion folks, I offer you a quote from writer and economist Bill Bonner.

There is no record of any public crusade, intended to make the world better, that actually did so. The Great Crusades of the Middle Ages, the religious wars of the 15th, 16th, and 17th centuries, the French Revolution and the Terror, WWI, the Russian Revolution, Nazi Germany, the Soviet Union…Prohibition, the War on Poverty, the War on Drugs, the War on Terrorism—all were disasters.

And now, the people who brought you these marvelous mishaps bring you another big campaign. It may be the most ambitious crusade in human history. Like the Great Leap Forward, it is led by fanatics. Dissent is repressed as misinformation. And it will up-end our traditional vernacular economy. There are 8 billion people on planet earth. They depend on fossil fuel. More important, they depend on the system that brought us fossil fuel—a system of bid and ask…please and thank you…give and take…that is, they depend on a vernacular economy that gives them what they want—fairly, freely, and effectively.

Take away that economy…substitute central planning by bureaucrats and party hacks, armed with statistics, quotas, rifles, tear gas, penalties, subsidies, and printing press money…and what do you have? A cold day in hell.

From CastleReport.us; appears by permission.

Grave Soaking Heretics: What is Wrong with the World? In Many Cases You Can Look to the Church to Find That Answer! (Video-Pictures)

Herschel Walker says he finds common ground with Biden on one thing: Eating ‘a lot of ice cream’