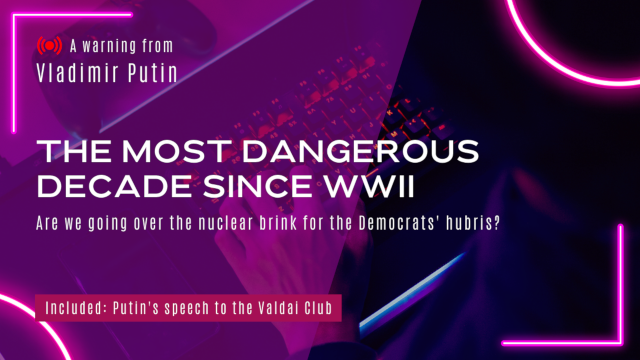 Hello this is Darrell Castle with today’s Castle report. This is Friday the 4th day of November in the year of our Lord 2022. I will be talking about a speech made by Vladimir Putin on Thursday October 27th at the Valdai Club, a Moscow based Russian think tank. Mr. Putin emphasized his continuing struggle with the West and described this decade as the most dangerous since WWII.

Mr. Putin said he had no regrets about what he still describes as a special operation meaning his invasion of Ukraine. He said that Russia has never considered itself an enemy of the West, but that period of time between the breakup of the Soviet Union and now in which the West has had undivided dominance over world affairs is ending whether the West wants it to end or not.

The fall of the Soviet Union left the West in the worst possible position and that is without an enemy to motivate the people and to feed the insatiable appetite of the military, industrial, security state. Since there was no more Soviet Union against which to pit the labor of the American people the United States, bit by bit started to become more and more like its 45 yearlong enemy. That is my opinion and not one expressed by Mr. Putin.

Mr. Putin made a point in his speech of always addressing the West rather than the United States directly. The West has been and is the continued adversary of Russia. The opportunity has been and is there for the asking, but the West is not interested in a diplomatic end to the struggle. Recently a group of 30 of the most liberal Democrat members of Congress petitioned the White House demanding that the administration conduct diplomacy with Russia.

The Congressional Progressive Caucus letter – and its retraction

These members of Congress, possibly fearing election defeat next week, were very diplomatic in their request. They requested, “proactive diplomatic push, redoubling efforts to seek a realistic framework for a ceasefire.” Pretty mild considering another sentence in their letter. “The risk of nuclear weapons being used has been estimated to be higher now than at any time since the height of the cold war.” They went on to ask for pairing military support with a diplomatic push. Their request was not that different from what Putin has been recommending but alas, it was far too radical for this administration and its coalition of war loving globalists to accept.

They were forced to retract their letter shortly after it was sent. That proved to the world that not even the suggestion of talking to Russia will be tolerated. The irony is that most of the talk about nuclear weapons first use, and of nuclear Armageddon, etc. has come from the White House. Putin only said that if attacked he would use any means necessary to defend Russia. That has been the policy of thehttps://www.politico.com/newsletters/national-security-daily/2022/10/25/progressive-caucus-retracts-ukraine-letter-00063310 United States and Russia for the entire existence of nuclear weapons. Russia has not publicly threatened to use nuclear weapons in Ukraine or anywhere else.

Putin disclaims any threat of first use of nuclear weapons

Putin emphasized in his speech that Russia has no intent and there is no necessity for nuclear weapons in Ukraine. He did discuss his fear that the West would use a dirty bomb in a false flag attack and then blame Russia. Dirty bombs are not nuclear but instead they are radioactive material wrapped around a conventional weapon so as to spread radioactive fallout and poison a population. Now both sides accuse the other of planning such an attack.

Possibly, from the tone of Putin’s speech, one might conclude that he is astute enough to understand the growing resentment of Americans toward Ukrainian president Zelensky who constantly lectures them that they haven’t done enough, haven’t sent enough, all the while the American economy careens toward a cliff. Some Democrats, their hypocrisy ever before them, are starting to understand that a growing number of Americans are fed up with it and are going to hold them accountable. If these Democrats were not total hypocrites, they would be screaming and demanding peace or at least negotiations, instead of withdrawing their letter.

Dangerous decade – has the time for diplomacy passed?

Mr. Putin and his foreign minister Sergei Lavrov both emphasized that the time for diplomacy to succeed may have already passed. We have reached a very ominous period in human history. A time in which population destroying weapons are talked about flippantly in public. The opportunity for meaningful dialogue between the two nuclear powers seems to have vanished. This is unprecedented because even during the cold war the two sides competed, but they talked. The weapons were always there, but they didn’t constantly threaten each other publicly.

In the meantime, the United States is positioning dozens of upgraded, and modernized tactical nuclear weapons in Europe. The United States has deployed the 101st Airborne Division to Romania on the Ukrainian border. In addition to the questionable morality of exposing the Romanian people to this conflict it leaves the 101st exposed. Airborne troops are light infantry designed to strike behind enemy lines then link up with advancing armored or mechanized units so leaving the 101st alone and exposed would require the rapid deployment of armored and mechanized units almost guaranteeing a direct conflict, possibly nuclear, between the United States and Russia, thus I categorize the decision as madness.

The administration beats the war drums

What was the Administration’s response to Putin’s and Lavrov’s remarks? Press Secretary Jean-Pierre broadcast her remarks from Air Force One. She said that Mr. Putin’s remarks were not very new and did not indicate a change in his strategic goals, including those in Ukraine. The Pentagon said that although Russia’s invasion of Ukraine underscored the acute threat posed by Moscow, China represents the most consequential challenge for the United States.

Again, Mr. Putin said that Moscow was ready for talks to end the conflict in Ukraine, but that Kyiv was not prepared to sit down and negotiate.

It’s not a question about us, we are ready for negotiations. But the leaders in Kyiv decided not to continue negotiations with Russia.

Rejection of the CPC letter – no peace

The letter sent by house “progressives” asking for negotiations raihttps://www.politico.com/newsletters/national-security-daily/2022/10/25/progressive-caucus-retracts-ukraine-letter-00063310sed the ire of some Democrat lawmakers, apparently those not members of the Congressional Progressive Caucus. This information comes from the dreaded, people inside who know about these things, so it might all be just more propaganda. But it makes sense in light of what has happened. Their objection to the letter was that it was inappropriate in light of Russia’s escalation and Russia’s engagement in war crimes.

I wonder about the open-faced hypocrisy of these people. They are apparently not old enough to remember George W. Bush’s invasion of Iraq which according to members of his cabinet, he planned months before nine eleven. He apparently invaded Iraq at a cost of thousands of lives and perhaps a trillion dollars to aid the bottom line of various defense companies because its hard to find any other plausible explanation. I don’t remember any calls to bring him before the ICC and try him for war crimes, but that is something quickly forgotten.

The retraction says why this is a dangerous decade

The letter withdrawing and apologizing for the letter says about all that needs to be said about Washington today.

The Congressional Progressive Caucus hereby withdraws its recent letter to the White House regarding Ukraine.

There was a fear that Republican statements that if they gained control of Congress, they might pull back some aid commitments, might be attributed to the letter and, therefore:

The proximity of these statements created the unfortunate appearance that Democrats, who have strongly and unanimously supported and voted for every package of military, strategic, and economic assistance to the Ukrainian people, are somehow aligned with Republicans who seek to pull the plug on American support for President Zelensky and the Ukrainian forces.

In other words, God forbid that we be identified with efforts at peace and even with talking about peace. No, we are unequivocally and forever totally committed to this proxy war no matter what the cost. Many of those who signed the letter seemed really embarrassed that their signature had been so called out by the White House and so associated with efforts to somehow, someway, find peace.

While making no direct threats against the United States a senior Russian foreign ministry official was quoted as saying that U.S. satellites which have been providing critical targeting information for Ukrainian forces are legitimate targets. What would the United States do if Russia attacked one of its satellites? Would that be enough to start nuclear war?

Who knows right now, but this war against Russia is very important to the U.S. Government. The world is starting to align differently with Saudi Arabia, Argentina, and Indonesia, asking permission to join the BRICS economic union. That is a direct threat to the U.S. global control and so the U.S. Government seems rather desperate to establish that it is still in control of things globally. That at least partially explains the willingness to let some of the world starve if that is what it takes to make economic sanctions against Russia work.

This is not our fight!

Finally, folks, I do not want to see our children die in some pointless idiotic conflict that is of no strategic consequence to America. The explanations of the people who insist on eternal war policies are ridiculous and as evidence they offer propaganda. Their arguments are absurd and make no logical sense these war planners, politicians, and bureaucrats. When I read their words or listen to them speak, I can feel the universe losing intelligence. Will we see any change after next Tuesday? Perhaps, but decades of experience lead me to doubt it

From CastleReport.us, appearing by permission. Separately, only 29 percent of Republicans think the Russia-Ukraine war is our fight. – Ed.