The Middle East is in an uproar, and President Obama is mixing in. He will bring no peace unless and until he understands the region’s history.

Last night, Hayley Peterson of The Washington Examiner reviewed Obama’s efforts to bring about lasting peace in the Middle East. No US President has ever done this. Three years ago Obama promised lasting Middle East peace before Jerusalem’s Western Wall. Today his special envoy, George Mitchell, has resigned in frustration, and the Israelis and the Palestinians aren’t talking.

The “Arab spring” only adds to Middle East tension. As Ben Stein points out, the “democratic” forces of the Middle East don’t want reform. They want Israel to disappear. In fact, they want to start a war with Israel. They think they can win that war and set up a new Middle East caliphate. (They have fought many wars with Israel already, and lost them all.) Stein accuses Iran of running a “regional coup” against regimes that, whatever their faults, have kept what peace has existed since the Yom Kippur War of 1973. Prime Minister Benjamin Netanyahu of Israel has accused Iran and Syria of the same thing.

And with good reason. Over the weekend, rag-tag battalions and rump regiments of irregulars stormed Israel’s borders at Gaza, Lebanon, and Syria. The Tzahal opened fire to repel them. The Tzahal killed some and wounded others, They then took the wounded irregulars to Israeli hospitals, had them treated, and then sent them home.

Those irregulars live in refugee camps, not regular towns. Those camps have stood since the 1947 War. They could never have gotten close to the borders unless the governments of Gaza, Lebanon and Syria had let them. Syria’s actions are especially ironic: the government crushes popular revolt in Damascus, yet waves mobs of “refugees” through key checkpoints so that they can attack the border fence.

Middle East unrest affects this country, too. Last Sunday, several pro-Arab demonstrators tried to disrupt a church service in Texas. Like the Arabs, they say that Israel has no right to exist, and no right to the lands it has “occupied” since the Second Arab-Israeli War of 1967. That war made the Middle East what it is today.

This week, Netanyahu and Palestinian Authority head Mahmoud Abbas have attacked each other in the world’s newspapers. On Monday, Abbas published an op-ed in The New York Times (cited in Arutz-7). He said he would go to the United Nations to ask it to admit and recognize a Palestinian “state.” That state would include the Gaza Strip and ancient Judea and Samaria. Twenty years ago, Yasser Arafat signed the Oslo Accords; Abbas rejected them. Then Abbas said:

[T]he last time the question of Palestinian statehood took center stage at the General Assembly, the question posed to the international community was whether our homeland should be partitioned into two states. In November 1947, the General Assembly made its recommendation and answered in the affirmative. Shortly thereafter, Zionist forces expelled Palestinian Arabs to ensure a decisive Jewish majority in the future state of Israel, and Arab armies intervened. War and further expulsions ensued.

Abbas is lying, or at best dissembling. Netanyahu swiftly called him on it.

Eli E. Hertz points out that the Arabs refused the UN partition, though the Jews accepted it. On May 14, Arab armies attacked from three directions. The kings of Egypt and Jordan encouraged Arab residents of Israel to flee their homes, and said that they would someday return. Most Arabs did flee. But the Arabs lost. Those Arabs who did not flee, have Israeli citizenship. (Israel also offered citizenship to Arab residents in the West Bank and the Golan Heights. The Palestinians won’t accept it.) But today the Arabs speak of a “right of return,” the most contentious Middle East issue aside from Israel’s existence. 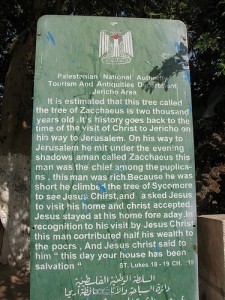 This comment on another forum gives more details. The first Zionist pioneers, the founders of the first kibbutzim, reclaimed the desert and swamps. The Romans scattered most (but not all) of the Jews throughout its Empire in AD 135. The Arabs took the land and let it become desert and swamp. A long-time resident told your editor this: the Jews bought land from Turkish landlords, all of whom laughed at them behind their hands. They thought they had pulled the biggest real-estate swindle since Eric the Red. But the Jews knew what they had, and how to make it better. They planted eucalyptus to drain the swamps, and developed drip irrigation and other techniques to reclaim the desert. (By law in Israel, any invention or technique related to agriculture is in the public domain and freely available for anyone to copy.) The Arabs started to settle in the land after the Jews made it productive again.

After World War I, the new League of Nations gave Britain a mandate to create a State of Zion in the region. The British did little to stop the rise of Muslim movements in Jerusalem and elsewhere, movements that openly sympathized and even allied with Nazi Germany. Then after World War II, the British began to withdraw, often turning over their forts and some of their armaments to the Arabs, while forbidding the Jews to arm themselves and trying to limit Jewish immigration. Despite all that, Israel fought a war for its independence and won it.

But it won the right to only half of Jerusalem, and to a narrow corridor between the Negev and the northern provinces. These are the “pre-1967 borders” that Abbas and others speak of. That Israel controls far more territory than this is because the Arabs, with the hot-headed Egyptians in the lead, prepared to go to war with Israel in 1967. Israel waited for two weeks for the UN to tell the Arabs to withdraw—and then Israel struck, and succeeded better than anyone on either side expected.

Arabs throughout the Middle East have tried ever since to rewrite history. They want others to given them the fruits of a victory they did not win.

Abbas still says that he’s willing to talk again. But he still stands by the old PLO platform. That document still says that any peace agreement is only a “prelude to war.”

Netanyahu will talk to President Obama this week, and address a joint session of Congress. Incredibly, Netanyahu’s government is still as willing to accommodate the “Palestinians” as Levi Eshkol was after the Six-Day War. David Bedein of the Israel Resource News Agency calls any plan for a Palestinian state a “Government Retreat Plan” and makes a case for retaining full control of the lands that Israel gained in that war. Bedein points out that any Palestinian state would include certain hills within “Sderot distance” of David Ben-Gurion Airport. He also referred to Palestinian Authority maps of the region that ignore Israel and key Israeli cities, like Tel Aviv, entirely. This last is especially telling: Tel Aviv annexed Jaffa after most of its residents fled in 1948.

Gold and silver come back

The revolutions are not a secret plot by Iran to destroy Israel, they are simply revolutions by (mainly secular) peoples for more enfranchisement and jobs and whatnot. (If your theory is accurate then how do you explain Syria’s revolts or the fact that they started in mostly secular Tunisia)

On your history, under the “Arabs” of the Ummayad Caliphate Abbasid Caliphate the City of Jerusalem and the rest of the former Roman Province of Judea, it was a vital port to the Mediterranean. Then under the Turkic Ottoman Empire it too flourished, in fact religious freedom under those flags was greater than anywhere else in the world at the time, with acceptance of Christians and Jews as “people of the book.”

Israel is not perfect, in fact they are far from it, the reason for Hamas is the fact that Israel is somewhat repressive to Palestinians, so naturally they are going to elect the most radical party, mainly as a reaction to the policies of the people they see as their captors, the best solution in my non-expert opinion is a Secular state, where people move about freely and there are no religious borders a government with guaranteed freedom of religion where the governments job has nothing to do with religion, much like India, The United States or any other first world country.

X,
These (mainly secular) individuals have been co-opted by the Muslim Brotherhood. What you will end up with in Egypt is another Islamic State controlled by Sharia Law and the subjugation of women.

You need to visit the Middle East Media Research Institute (link to memri.org) for a more accurate perspective than you’re now getting. Religion is everything in that region. The Islamists will drown out the voices of reform in Arab countries. They then will beat the drums for war. It’s 1948, 1967, and 1973 all over again.

Not only will Egypt become another Islamic state, but also, and more importantly, it will go to war with Israel. The Brotherhood will think that they can succeed where Nasser, and Sadat after him, failed. They won’t succeed; no nation has. But if I were you, I’d get ready to buy gold and silver.

Gold and silver come back - Conservative News and Views

[…] War will soon come to the Middle East. It might come this summer, or it might come this fall, but it will come. Maybe Egypt will break their treaty, stop selling oil to Israel, and go on to blockade the Straits of Tiran again. Or a new leader will arise in Syria, a leader who will try to recapture the Golan Heights. […]