The Obama AIPAC speech did not help make Obama’s Israel policy any clearer or more comforting to friends of Israel.

Yesterday (May 22, 2011), President Barack H. Obama made his second speech in three days on Middle East policy. This time he spoke to the American Israel Public Affairs Committee at their annual conference in Washington, DC. (Full text here, from the Patriot Action Network.) Obama needed to reassure his listeners that he was not abandoning Israel, after his May 19 State Department speech. To AIPAC he said two things:


Obama AIPAC Speech: what does it mean 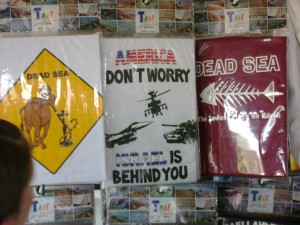 T-shirts on sale on the Golan Heights: America, don't worry: Israel is behind you! (CNAV)

The first point still will not satisfy both sides and might not satisfy either side. On Thursday, Obama said that a Palestinian state must have permanent borders with Syria, Jordan, and Egypt, and that Israel must have permanent borders with Palestine. The Obama Israel speech repeats this. But such a Palestinian state would surround Israel on all sides, except the Mediterranean coast. (Israel now has a permanent border with Egypt. But would it keep it?) And if a Palestinian state is also all in one piece of land, then Israel would give up the Negev, and her port of Eilat on the Gulf of Aqaba. Or else, Israel would have one main piece of land and another, much smaller zone around Eilat, accessible only by air.

A country can survive if it has two or more pieces of land, with other sovereign territories, or oceans, between them. The United States has a main body of land (“The Lower Forty-eight” or “The Mainland”), plus two States not attached to it (Alaska and Hawaii). Russia has always had a tiny piece of land west of the Baltic states in addition to its main body. The United States does have another country (Canada) between Alaska and “The Lower Forty-eight.” But: the United States does not have to defend Alaska from Canada. Canada is friendly; it has never tried to take Alaska from America. A Palestinian state would almost certainly overrun Eilat—and Egypt’s effective blockade of Eilat was one of the things that started the 1967 War!

And Obama is wrong about such a policy being US policy all along. Hillel Fendel at Arutz-7 makes that point. For Obama to say anything along that line departs from US policy. In April of 2004, George W. Bush wrote a letter saying that the United States would never insist on restoring the 1949 armistice line. (Tellingly, that letter used the proper term: “1949 armistice line,” not “1967 Israel borders.” Whoever wrote that letter for Bush must have realized that “1967 Israel borders” would be a non-sequitur.) Obama reneged on that on Thursday. The Obama AIPAC speech also reneges on that letter, no matter what Obama says.

Natasha Mozgovaya of Ha’Aretz seemed to think that the Obama AIPAC speech sounded good and satisfied most listeners. (One listener cried, “Boo!”) But she probably quoted sources sympathetic to the President. At least one source said that Obama was telling AIPAC what they wanted to hear. Your editor’s impression of the Ha’Aretz piece: Democratic Party fundraisers desperately need to hide, or explain away, Obama’s openly hostile stance toward Israel. Furthermore, Mozgovaya might not realize just how strong Israel’s position is under international law.

Josef Goebbels was right. Tell a lie loud enough and often enough, and people will believe it. Nobody likes to think that anyone can tell a Big Lie and get away with it. The Big Lie has come from Arabs. Gamal Abdel Nasser said that American and British planes, and not Israeli planes, destroyed his air force on the ground on the first day of the 1967 war. That was the first Big Lie. Now the Arabs say that the 1967 Israel borders were permanent borders, and that UN Resolution 242 demands a complete return to them. Both are Big Lies. Sadly, the Obama AIPAC speech repeats them. That Mozgovaya would allow the Arabs, and Obama, to dupe her, and not discover the world’s forty-four-year-old mistake as others have, tells a sad tale about modern journalism, especially in Israel.

At least Hillel Fendel at Arutz-7 is smarter than that. He picked up on another mistake that people have made: that UN Resolution 242 demands the return of all lands that Israel took in the 1967 War. It does not. It was deliberately vague on that point. By “passing up vagueness,” the Obama State Department speech gave Israel good reason to fear. The Obama AIPAC speech did not help matters, no matter what people think.

A three-man panel at AIPAC gave further proof that the Obama AIPAC speech did not help. A Christian evangelical, a former press secretary to George W. Bush, and a Democratic commentator who has long been one of the Republican Party’s bitterest enemies, all agreed that the USA should support Israel more than Obama is now doing. And they said this after the Obama AIPAC speech took place. (Ari Fleischer, the former press secretary, said that Obama needs to win more than 75 percent of the Jewish vote across the country, or he’ll lose re-election. He probably means that the Jewish contingent in Florida can easily decide the election between the two parties—and Florida might decide the Electoral College.)

This morning, Arutz-7 reported another sign of trouble for Obama: Israeli Foreign Minister Avigdor Lieberman said flatly that Israel will not recognize any “right of return” of Arabs who fled Israel during its early wars, from the War for Independence to the Six-day War.

Yet another item that will overshadow the Obama AIPAC speech is this report that Obama told (or repeated) a lie in his State Department speech. Barry Rubin of Pajamas Media picked up on Obama’s tale of a Palestinian father who lost three daughters in a shelling attack on January 16, 2009. The problem: an official Israeli inquiry found that Hamas snipers were in the area. They fired; Tzahal soldiers fired back. The three girls might have died in the crossfire—or they might have died when some of Hamas’ stores of explosives blew up. But the President did not mention that little detail, either at the State Department or in front of AIPAC. (Nor did Obama ever mention the Palestinian Authority now paying salaries to terrorist inmates of Israeli jails—with US taxpayers’ money.)

In short, the Obama AIPAC speech solved nothing. He told his hardest-working supporters in the Jewish community what they wanted to hear. He does not know, or does not care, that many listeners, Jew and Gentile alike, know better.

American Jews now have to decide:

Maybe Obama can keep enough Jewish support to win re-election. Maybe the Jews most likely to take alarm at his two speeches, will “make Aaliyah.” Then they can sign up for the Tzahal and help fight the war they know is coming. But then they would no longer have a vote in the election. Maybe that is what Obama wants.

But if they decide instead that they can fight for Israel more effectively as American voting citizens, then Obama has just hurt himself, and badly enough that he can’t fix it.

Plans for a rally of concerned Christians and Jews in Washington, to take place before the start of the Christians United for Israel conference, are still under way.

1967 Israel borders have no basis

[…] Barack H. Obama has made two speeches lately, one at the State Department and the other before the American Israel Public Affairs Committee. Both times, Obama proposed a return to the 1967 […]

Wow this is a great resource.. I’m enjoying it.. good article

[…] Barack H. Obama has made two speeches lately, one at the State Department and the other before the American Israel Public Affairs Committee. Both times, Obama proposed a return to the 1967 […]