The Middle East gets more agitated every day, as the Arabs prepare protests, for the first time, on the day they lost the Six-Day War of 1967.

The Nakba Day protests have never interfered with the Israeli Yom Ha’Atzmaut (Independence Day) celebrations, for a simple reason. Israel uses the 19-year “Hebrew calendar” that Rabbi Hillel II invented in AD 350. The Arabs, ironically, follow the Gregorian calendar that Americans and Europeans use. They would use their own calendar, except that it does not follow the sun, and so does not follow the seasons, either. But they would never follow a calendar that Jews invented.

Arabs have marked Nakba Day with protests almost since the Armistice of 1949. But they have never bothered with separate Naksa Day protests. As the names imply, the real calamity for the Palestinian Arabs is that Israel exists and still stood after the 1848-9 war. Their losses in land in the 1967 war were a mere setback, not a calamity. They routinely say that they want the international community to recognize the old “1967 Israel borders” (actually the 1949 Armistice Line). But what they really want is for Israel to go away, and for all its Jewish residents to go back to America, Europe, and everywhere else that they or their ancestors came from. So separate protests for losing the 1967 war were irrelevant to them. 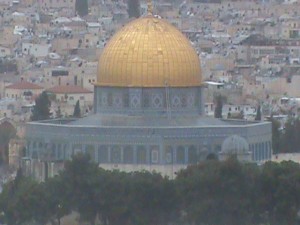 The Dome of the Rock, as seen from the Mount of Olives in Jerusalem. Photo: CNAV

This year, the Palestinians will mark their “setback” with even bigger protests than they made two weeks ago. Sabri Saidam, an adviser to Palestinian Authority President Mahmoud Abbas, said as much today, according to Arutz-7. Agitators are trying to organize massive marches toward Jerusalem. Others are planning a “fly-in” at David Ben-Gurion Airport on June 8. (Thus far only five hundred people have signed up. Between airport security and El Al Israel Airlines security, few people who know that airport expect the “fly-in” to amount to anything.)

Saidam also spoke of something else: a “Third Palestinian Intifada,” or a more general uprising. Abbas has said before that he didn’t want to risk that. He thought the Second Intifada in 2000 ended badly for Palestinians. Still, Saidam even said that Palestinian refugees are the new “Palestinian nuclear weapon.”

This year, they might feel more bitterly provoked. Yesterday was Jerusalem Day for Israelis. And for the first time in decades, Jews came to the Temple Mount to pray and receive a blessing from a rabbi. (They took a mikveh bath and did other things to “purify” themselves before they came.) Until this year, the rabbis told Jews to stay off the Temple Mount, saying that it was too holy to approach. (Your editor has been to the Temple Mount and read the posted warning signs, in Hebrew and in English.) They did this in full view of the Muslim Waqf police that guard the Mount.

That must have taken a lot of courage. Those police look like American Special Weapons and Tactical squads in big cities, not like friendly neighborhood cops on the beat. Bear in mind, also, that nothing takes place in the Middle East without someone reading a political message into it.

Israelis who live in the Judea and Samaria lands are worried. They want the government to protect them from what they fully expect to be a violent day.

Elsewhere in the Middle East

The West Bank isn’t the only agitated place in the Middle East. Al-Qa’ida (“The Base”) terrorists have taken over at least two cities in Yemen. They hope to change from an army without a country, to an army running one.

In Gaza, the Islamic Resistance Movement (Hamas, a name meaning zeal in Arabic) refuses to revoke its anti-Israel charter. They also say that they will never talk to Israel about anything. So what about their reconciliation deal with Abbas’ Authority in Ramallah? That might be less firm than people have thought. Hamas officials will not let Abbas’ people reopen any offices in Gaza. They will not even guarantee that Abbas would be safe if he visits Gaza. They say that “Israeli agents” might shoot Abbas. Translation: some of their people might shoot Abbas, if they thought they could. One reason might be that, though Hamas won’t talk to Israel, Abbas will. Arutz-7 says that Abbas will meet with Israel’s president, Shimon Peres, at the celebration of the formation of a united Italy 150 years ago.

Peres is worried about a threat even further east: Iran. Specifically, he worries that Iran will design and build nuclear warheads and launch missiles against Israel, Egypt, Jordan, and Saudi Arabia. (President Mahmoud Ahmadinejad of Iran is a “Twelver,” a believer in the Twelfth Imam of Shi’ah tradition. He might try to take over all of the Middle East to usher in the return of this legendary person.) Peres wants a medium-range anti-missile system to protect against an Iranian missile strike.

Good news in the Middle East?

Good news in the Middle East is hard to find. Arutz-7 intercepted some Egyptian reports that Hamas was close to swapping IDF Staff Sergeant Gilad Shalit for about 1200 terrorists now in Israeli jails. But they have not been able to confirm this on the Israeli side.

Israel would like to offer something besides land: a way that the Arabs could make their own lands grow things again. Since the First Aaliyah, Zionist and Israeli farmers have invented new ways to reclaim the desert and swamp that the land had become. Now they are reclaiming parts of the Negev, and using other parts to grow things that grow better in dry areas. All these techniques are in the public domain, by Israeli law. Israel is always willing to share them with the world.

Sadly, those techniques will more likely spark resentment. When the Tzahal captured the Golan Heights in 1967, they asked their Syrian prisoners why they hated Israelis so. The prisoners’ answer:

Because Allah has blessed your fields.

Israelis are likely to hear the same answer today. The bitter reality of the Middle East is that some people do not so much want what others have, as to make sure that those others can’t have it.

American politicians are looking at the Middle East more closely than ever. Former Governor Sarah Palin of Alaska toured New York City yesterday in her signature bus. And in honor of Yom Yerushalayim (Jerusalem Day), Gov. Palin wore a large Star of David. She wore that jewel, or a similar one, when she toured Israel in March.

President Barack H. Obama still has not recovered from his statement about the “1967 Israel borders.” Israeli Prime Minister Binyamin Netanyahu dressed him down in public about that the next day. He said that Obama simply does not understand the realities of the Middle East. (Ironically, some American Jews don’t think that Netanyahu understands them, sometimes. They worry that he’s not tough enough to guard Israel’s interests.)

What’s next in the Middle East?

Your editor does not hope for peace in the Middle East. The Bible (including the Old Testament and the New) predicted what has happened, from the desert blooming to Jerusalem being a major diplomatic embarrassment to the Gentiles (literally, “the nations”). The Bible further predicts a major scandal involving the Temple in Jerusalem. Problem: the Temple does not exist—yet. The Temple Mount ceremonies yesterday meant something that no Arab can miss.

Only the continued flow of American foreign-aid and tourist dollars—and petrodollars—has really kept the peace. That might not last much longer. America will be in recession once again, if it isn’t already. Its budget-strapped people won’t be taking many vacations to the Middle East. If they do, they’ll travel to Israel, not to Arab countries whose people don’t even make them feel welcome anymore. (Ask Lara Logan, reporter for CBS. An angry Egyptian crowd raped her and called her “Yehudah! Yehudah!” Which means, “Jew!”) Many Republican candidates want to cut off all foreign aid to all countries in the Middle East. With the dollar about to collapse, America might have to.

So war could break out at any time. War could come next week, next month, or late in the year. And it cannot fail to affect everyone in the world.

Wow. I mean, WOW. What can you say? It’s tempting to say “same old, same old”, until you read the Bible.
Which is, of course, why the Lamestreamers don’t report this kind of thing if they can help it, or if they do, they twist it up to suit.

I mean, we can’t have anything close to God, like a biblical description that fortells and explains it all (And how many thousands of years ago now?) getting credit! Naw, thats just a coin-ink-ee-dink!

If we gave into that, we couldn’t blame the Jews, and pat the Arabs on the head, now could we?

Rock on, Conservative News and Views!