Charles Rangel dares ask, “What would Jesus do?” He mistakenly assumes that Jesus preached socialism. Sadly, he is not alone in this.

What is Charles Rangel talking about? 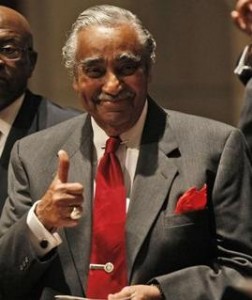 Representative Charles Rangel (D-Harlem) is talking about tomorrow’s meeting between President Obama and key leaders of Congress. The subject, of course, is the debt ceiling. If Congress does not raise the debt ceiling, then on August 2 the government will have no authority to borrow any more money. Obama says (without foundation) that the government will then be in default.

Obama wants Congress to raise the debt ceiling very badly. (He didn’t want the raise that Congress granted in 2007. A different President was in office at the time.) He could probably get the Senate to go along. (Maybe.) But the House demands deep cuts in spending.

Republicans control the House. Many of these are Tea Party freshmen (not to mention the head of the Tea Party Caucus in the House, Representative Michele Bachmann, R-MN-6). Their constituents won’t like a raise in the debt ceiling. House Republicans know it. They have told Obama, in effect, that if he agrees to cut spending, they’ll make their constituents swallow it. If not, not. (Bachmann and a few others have made a stronger point: they won’t vote to raise the debt ceiling under any circumstances.)

Democrats know it, too. They also know that their constituents want them to keep “the goodies” coming.

This is the context for Charles Rangel’s outrageously hypocritical question.

What did Charles Rangel ask?

Yesterday, Charles Rangel gave a press conference on Capitol Hill. There he called on the nation’s clergy to lobby Congress for a rise in the debt ceiling, and for massive tax increases.

What would Jesus do this weekend? Or Moses. Or Allah. Or anyone else.

In case anyone doubted what he thought that Jesus would do, he named the public favorites of the Democratic Party:

the homeless, the jobless, and the helpless…the sick…and…the aging that are sick or those depending on Social Security, Medicare, and Medicaid.

Rangel wonders why clergymen do not routinely badger Congress to keep these programs going. He said so. And then he asked this:

If Charles Rangel wants that debate, he’s got it.

Charles Rangel makes the same mistake that many people make, who understand neither economics nor politics nor Christianity. They think that Jesus Christ preached socialism. They base that on Jesus’ advice to His students to give of their own free will to those who might need a helping hand once in a while. They also cite Jesus’ frequent criticism of wealthy people of his day.

Ayn Rand (Atlas Shrugged) made the same mistake. This, among other things, caused her to reject God completely. She declared that no human being has moral authority over another, in any context. To her, the basis of morality—a concept Rangel invokes—was values that men accept by choice.

Rand’s analysis was incomplete as well as mistaken. Morality is a code of rules, and rule presupposes an answer to the question, “Who says?” Charles Rangel knows better than to say, in answer, “I say” or even “Obama says.” He says, “Jesus says.” But he clearly does not know what Jesus really says, or what He means by it.

What did “rich” mean back then?

First, most of the “rich” in Jesus’ day did not come by their wealth honestly. Few do in an occupied territory where the governing authority lays and collects exorbitant taxes. Some of these “rich” people were private tax gatherers. And some of them, like Zacchaeus of Jericho, collected taxes in clear excess of what even the occupying Romans demanded. They would even trump up evidence against people to get them to pay more taxes.

Behold, Lord, half of my possessions I will give to the poor, and if I have defrauded anyone of anything, I will give back four times as much. [Luke 19:8, NASB]

The Greek word for “defraud” is sycophanteo, which means “I ‘show the fig’ on someone.” To show the fig meant to:

The concept came from a time when figs were rare, and a Greek city-state forbade its residents to carry figs out. Customs officers would often use figs as “throw-downs” to shake down travelers.

If that sounds familiar, it should. Charles Rangel might want to check further into Operation Fast and Furious before he accuses modern wealthy men of doing what the government itself has done.

Furthermore, Jesus told his followers to give freely, but not as a tax. He did not revoke the Eighth Commandment (no theft) or the Tenth (no coveting). And offering charity to someone who might have stolen from you is not an obligation; it is grace. It shows the great favor that Jesus Himself did for everyone: offering them a way out of guilt for their real sins, if they will change their hearts.

What would Jesus do?

Charles Rangel should thank his lucky stars that Jesus does not face him directly. Jesus would certainly call out Rangel for a hypocrite for not paying his own taxes. Here your editor will only say, as Samuel L. Clemens might say:

Let us close the curtain of charity over the rest of the scene.

That aside, Jesus often reminded some of His critics (especially the Pharisees) to look up the parts of Scripture that they conveniently missed. In this case, He would cite Proverbs 22:7:

The rich rules over the poor,/And the borrower becomes the lender’s slave.

And He would apply that maxim to the United States government itself ahead of any of its citizens or lawful residents.

He would also remind certain clergymen, if they needed reminding, that He never proposed to replace one system of unjust taxation with another.

And He might tell some of the wealthiest in this country—those who say that “they don’t need certain tax rate cuts or deductions”—to prove their words with deeds. That’s easy: they can each write a check to the Bureau of the Public Debt!

In short, Jesus Christ would not support Charles Rangel, or anyone else who says that “the rich” incur a moral obligation merely by being rich. First, Jesus never said that. Second, those who cry the loudest about such an obligation should meet their own obligations first.

First, this is unbelievable since I wonder if our good man Charlie here thought of Jesus when he decided to cheat on his taxes…..guess not or that wouldn’t have happened. But why digress?

Well, to be specific….Jesus wanted us to take care of our brothers…US, you and me….not the government. You cannot dislodge yourself from charity and abdicate it to the government and think you are in the clear. Everyone, no matter how small your treasure, can do charitable work. While we have liberal social justice crammed down our throats daily, there is no “collective salvation” and no one who believes the Bible is the true word of God can ascribe to that. Trust must be in God (check your pennies and dollars), not government which is run by men and women and hence corruptible.

When those who demonstrate a pattern of reprehensible behavior quote scripture to lead us to an action which is against teachings it is not just shameful it is deceitful and self-serving (yet again).

I’ve no love for Charlie Rangel. I think it’s a shame he wasn’t put out of office.

But here’s a funny comic on a similar subject:

And I’m not fond of Al Franken either, I find him uncivil. But this comic I find funny.

Glen Beck is a Weasel

First, TERRY A. HURLBUT, under a recent president by name of George W. Bush, the debt ceiling was raised 7 times without even blinking an eye let alone asking for ANYTHING IN RETURN to raising the debt ceiling!

But now, when a democrat, and perhaps more importantly, the first black president wants to raise the debt ceiling (which has always been raised when approaching it!!) the teapublicans say the WILL NOT raise the debt ceiling UNLESS we also have EXTREMELY DEEP SPENDING CUTS!! Where were these deep spending cuts during the 8-years that Bush ruled????