Again, Ron Paul makes a point that cuts to the root of society’s problems. And again the media misunderstand and misrepresent him. The latest issue: dependency on the federal government for relief from natural disaster.

Yesterday Ron Paul was in Gilford, NH, giving a speech over lunch. Afterward, he told a reporter for NBC-TV that the Federal Emergency Management Agency (FEMA) shouldn’t be necessary.

We should be like 1900. We should be like 1940, 1950, 1960…I live on the Gulf Coast; we deal with hurricanes all the time. Galveston is in my district….There’s no magic about FEMA. They’re a great contribution to deficit financing and quite frankly they don’t have a penny in the bank. We should be coordinated but coordinated voluntarily with the states. A state can decide. We don’t need somebody in Washington.

Wow! To hear Alex Parrene at Salon.com tell it, you would have thought that Ron Paul said that people should starve to death!

Note carefully: Paul said that each State should decide for itself how to respond to an emergency. He also reminded the reporter that FEMA has no funds for disaster relief, anyway. 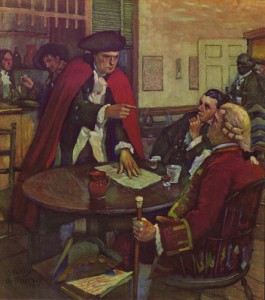 What Ron Paul really meant was that the States depend too much on FEMA, and for that matter a real alphabet soup of agencies, to tell them what to do. And that before FEMA existed, States handled such matters by themselves.

Parrene doesn’t seem to think the States did a good job:

Back in those days, after hurricanes would strike, communities would remain devastated, with thousands of people homeless and hungry, for weeks. And eventually they would beg the Federal War Department for help. (But they all enjoyed their liberty, as they waited in filth and disease for help from Uncle Sam.)

Is life so dear, or peace so sweet, as to be purchased at the price of chains and slavery? Forbid it, Almighty God! I know not what course others may take; but as for me, give me liberty or give me death!

So, too, would Benjamin Franklin:

Those who would give up essential liberty to purchase a little temporary safety deserve neither liberty nor safety.

More to the point, Parrene gives no evidence to support his statement. And even if it were true: what does that say about the kind of people we are?

Ron Paul is not the first to say that Americans shouldh’t have to depend on Washington for help, and have someone not like it. Glenn Beck described how the people of Joplin, MO, did not wait for FEMA after a tornado leveled their town. (He mentioned it again in Jerusalem three days ago.)

That provoked this response a month later:

One of the ironies of our American way of life is that so many people who are struggling to make ends meet listen and lend credence to spoiled millionaires telling us that we don’t need the government.

No. The real irony is that the heirs of the American Revolution, and the Declaration of Independence, say that dependency on government is the norm, and even the ideal.

How to break that dependency

Ron Paul said that the States should decide for themselves. But he has also said before that the people should arm themselves, or at least be free to. This gives a clue to how people ought to prepare for a disaster.

For that is the key. People depend on the government because they don’t prepare. Alex Parrene at Salon.com mentioned another problem, though with a scoffing tone: moral hazard. He was talking about federal flood insurance, which puts people at moral hazard of building homes where they shouldn’t. That’s why storm surges are such a problem: because people build too close to the water. Private insurers know that—and that’s why they don’t offer flood insurance.

More than that: people don’t prepare for the simplest things that can disrupt all the trappings of civilization. Everyone knows by now about people losing electrical and/or telephone service in the path of Hurricane Irene. Last winter, snow stayed on several streets in New York City because no one was around to plow it.

Ron Paul calls us to change that. In his America, your local neighborhood watch would stand ready to help, without waiting for “first responders” from a distance. (They also would keep looters at bay.) In his America, every community would react like Joplin, MO—and people wouldn’t starve or die of exposure. In Ron Paul’s America, people would have liberty in the best sense of that word: independence and self-reliance, with help from immediate neighbors, not government institutions.

Maybe some people in the media don’t want to live in that kind of America. Ron Paul does. No wonder they don’t like it when he drops even the hint he dropped on Friday.

As said on this website, the MSM has ceased being the true and honest newsgivers but, instead, have become a source of entertainment.

Figuratively speaking, the MSM are the fiddlers while Rome burns.

My parents were nearly wiped out in Hurricane Carla (1961).
The Red Cross gave them some money. They and other family members put in countless hours to repair damage to their home and business. Other neighbors banded together to help each other. It was tough for over a year but no one starved.

Ever since they have donated generously to the Red Cross.

Wow, this is some crazy rhetoric. A man rightfully points out that leaving states to fend for themselves during disasters leads to more suffering, displacement, etc. because states are smaller than the federal government, and being hit by a disaster weakens them… and what is the reply? Associating the duty of federal government to assist its member states during times of emergency with slavery and bondage.

Hey if you really want to prove how crazy your ideology has become, try writing a piece explaining the need to disband the military, courts, jails and state hospitals. After all, this is dependency on the state, and that is slavery right? We should all be self-sufficient during foreign invasions, crime in our vicinities, and capable of dealing law and holding our own inmates.

Above all, there should be NO dependence on the state. A state exists to do NOTHING. It does not protect its citizens from natural disasters, it does NOT provide healthcare, social security, welfare, or anything else. Basically it exists to protect the property owners, the more property you have, the more protection you are afforded. Isn’t it obvious?

You have destroyed any credibility you might have on this subject, by actually declaring (in a comment that I did not approve for publication) that citizens and lawful residents really did need to have government ram things down their throats for “the public good,” “the good of the environment,” or whatever banner suits you at the moment.

A state exists to protect its citizens, lawful residents, and guests from the initiation of force against them. The police, the military, and the judiciary are the proper functions of government.

Natural disaster response should not be a civil responsibility. That’s what militias should be for. And hospitals? Medical care is a service like any other. (Oh—accidental injury? That’s what accident insurance is for, as you very well know. And liability insurance, and many other kinds of insurance.)

The government of a free society exists to protect life, liberty, and property. And property does not limit itself to real estate, or have any minimum threshold. If I swipe your radio, I have taken your property without your consent. Do you really believe that I would not expect you to call the cops in that event? Or that the cops wouldn’t care? They’re supposed to care. That’s their job.

Or at least, that should be their job. But you want to hire a bunch of other bureaucrats who have the job of making a New Communist Man. Or maybe just to protect the Big Names with Pull. (In Russian, nomenklatura.)