Another plant connected with the Iran nuclear program blew up this week. Was that an accident, or sabotage? And who might have done it? If it is sabotage, the Iranians only make it easier by trying to deny that they even have a problem.

Almost no one really believes that the Iran nuclear program has a peaceful purpose only. Even Representative Ron Paul (R-TX), the most isolationist candidate for President, never said that. He says instead that Iran, even under its current regime, has a right to nuclear weapons.

The only ones who do say that the Iran nuclear program is peaceable are the Iranians themselves. But they do two things that make the outside world tend not to believe them:

With regard to the latter, Iran’s President, Mahmoud Ahmadinejad, is on record: he wants to destroy the Republic of Israel, or the “Zionist Entity” as he and others call it. He is also a “Twelver,” a devotee of the legendary Twelfth Imam of Shi’ite tradition. This Twelfth Imam disappeared, at the age of five, after his father died of poison. Legend says that he will return at the end of the world. And Mahmoud Ahmadinejad believes that he is the chosen forerunner of that person.

For all these reasons, whether anyone in the West says them out loud or not, several Western governments have sanctioned Iran in various ways. In response, Iran expelled Britain’s ambassador. Then several Iranian “students” (many of whom were probably militiamen) stormed the British Embassy in Tehran. The British rejoined by closing its embassy, calling all its diplomats home, and then expelling Iran’s diplomats from London.

But in the middle of these diplomatic dust-ups, some other things have happened that cannot be coincidental.

A series of accidents

First came the Stuxnet Worm attack in 2010. This worm destroyed years of work on the Iran nuclear program and delayed them in producing enriched uranium. Half a year later came the first report that the first tests on this piece of malware occurred in Israel. Iran uttered not a word of protest.

In the middle of November, something blew up at a military base west of Tehran. Iran tried to deny that anything blew up, though before-and-after satellite pictures clearly show that something did. Then Iran tried to pass it off as another accident. One might believe that, except for one thing: the men at this base were testing the kind of long-range missile that Iran would need to attack Israel with nuclear devices. Not only that, but Hassam Moqaddam, the “architect” of that missile program, and sixteen other men died in that blast. No less than Supreme Leader Ayatollah Ali Khameini showed up at their funeral.

This week, something blew up at another plant that was part of the Iran nuclear program. This was the main uranium enrichment plant at Isfahan in central Iran. Again, Iran denies loudly that the blast was anything but an accident, or that the plant took any damage.

The late Ian Fleming once wrote this in a James Bond book:

Once is happenstance; twice is coincidence; and the third time, it’s enemy action. 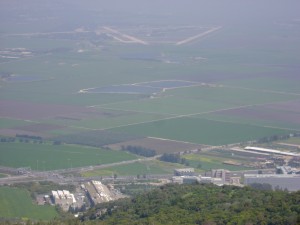 Ramat-David Air Force Base, Valley of Jezreel, as seen from Mount Carmel in north central Israel

Everyone in Israel who cares to know, knows that Israel is Iran’s prime target. CNAV heard this first-hand while in Israel in April of this year. So the comments now coming from Israel should surprise no one. Most telling is this comment by Aluf Giora Eiland, Tzahal (retired), former director of national security for the Israel Defense Forces:

When there are so many events, there is probably some sort of guiding hand, though perhaps it’s the hand of God.

Aluf Eiland might be doing nothing more than admitting that a series of accidents does not happen by itself. But Intelligence Minister Dan Meridor laid it on the line:

In any other context, Minister Meridor and Aluf Eiland would be taking a terrible war risk by saying even that much. But Iran doesn’t want to admit that the Iran nuclear program has any warlike aim. So how can the regime charge Israel, or anyone, with an act of war?

Why would Israel act?

The best read of the evidence: Israel seeks to slow down the Iran nuclear program through sabotage. They don’t want to wait for economic sanctions, and certainly don’t trust the United States to intercede on their behalf against Iran. (They have no good reason to trust the United States for anything now, not while Barack H. Obama holds the office of President.)

They’ve chosen the latter. They can get away with it, not because no one would believe them culpable or capable, but because the Iranians dare not accuse them. Again, if Iran accuses anyone of sabotage, they must admit that they are a target. No sober observer would believe that the Israelis would blow up civilian power stations or the plants that would supply them. So the regime would have to admit that the Iran nuclear program was a military program. Everyone knows that anyway, but Iran would lose whatever moral high ground they think they have if they said so out loud.

Mark Krikorian of National Review speculates that Israel wants to delay the Iran nuclear program long enough for the Iranian regime to fall. Better sabotage than a flat-out invasion, something that even the United States will not do. Will the regime fall in time? Only time will tell. But greater miracles have happened in the Middle East before this. The Six-Day War (June 5-10, 1967) was one.

Iran war about to break out?

Climategate 2.0: they knew they were lying

I’ll allow that. And also say that I have no brief for that man. But he’d be ranting and raving and complaining to all the four corners of the earth. That he doesn’t do that is because he’s too scared to admit that the Israelis are after anything he’s developing. Because then he’d have to admit what that something is!

David
Reply to  Terry A. Hurlbut

Yup.. I agree that he is a coward and believe the only reason he shoots from the lip is because Russia,China and Li’l Kimmie all have his back

True enough. One thing, though, that I didn’t put in here, because it was a bit beyond scope: Ezekiel’s War. Check out Ezekiel chapters 38 and 39. But that’s not a war that Iran will start. It’s a war that Russia will start, with Iran tagging along for the ride. But it will be a sorry ride for them all. Eighty-three percent casualties, and the IDF competing with the buzzards for disposition of enemy remains.

It could be an accident….or not. Neither really matters in the end. The Iranian regime will fall. At the rate of apostasy and dissatisfaction with the islamic approach to life, it’s bound to happen sooner or later….probably later, sadly. There will have to be a violent revolution. The tactic of “breaking the bank” that worked on the USSR won’t play well with Iran because of their oil revenues. The black robe fanatics may or may not be insane enough to really attack Israel. They know the retaliation will be much stronger than any attack they could mount. Muz make good cannon fodder but lousy warriors….they just seem naturally inept. They certainly have a severe disadvantage in technological expertise due to their culture that absolutely demands ignorance of anything not expressly delineated in their koran. If the mullahs really believe the horse apples about the “12th” is a good question. I’d be willing to bet there are plenty that know that is a fairy tale and only useful as a religious control ploy for the ignorant. The muz worldwide do so much chest pounding with no means to back up their brags that it’s hard to differentiate what is a real threat and what ain’t. If Israel is sabotaging the Iranian efforts….good! I certainly wish them luck and success. Hopefully they will be able to delay the mullah’s plans and even destroy the efforts without total war. Sure hope so…….

Iran war about to break out? - Conservative News and Views