The Ark Encounter project bought the last land tract it needs for its project. But the company will build the 800-acre park in phases, not all at once. The first phase will be the main attraction: a full-scale mock-up of Noah’s Ark.

Ken Ham, President of Answers in Genesis, described his reasons to build Ark Encounter in a video he released today. (See below.) Ham conceived of what would become Ark Encounter while he built the Creation Museum in Petersburg, Kentucky. That first project was Ham’s answer to secular natural-history museums, all of which told the evolutionary story of the origin of life. Instead of that, the Creation Museum tells the history of Christianity, the falling-away of American society, the results of that falling-away (“Today man decides truth whatever”), and the story of creation, as Genesis tells it.

The Creation Museum opened in May of 2007. Its exhibits include a large life-sized section of Noah’s Ark with the men who built it, and several models showing the Ark as it loaded, as it floated on the Flood waters, and finally as it ran aground.

Before the Museum had been open for a year, Ham wanted to build a complete full-scale replica of the Ark. (The Museum staff told this to your correspondent when he visited the Museum on March 28, 2008.) That replica will be the centerpiece of the Ark Encounter complex.

Tim Lovett, author of Noah’s Ark: Thinking Outside the Box, has been the resident naval architect for Answers in Genesis for several years. He has his own site where he explains his theory. He believes that the ancient wooden warships that plied the Mediterranean Sea had features that the copied from Noah’s Ark. They include especially a forward projection in the ship’s bow and a high sail-like superstructure in the stern. Lovett says that Noah’s Ark was not a simple rectilinear box, but must have had these features so that it would head into wind and waves. Heading into the wind is the safest attitude for any ship in heavy winds and seas.

Ark Encounter, LLC plans to build a wooden vessel, to the dimensions that the Bible gives, using the length of the royal Egyptian or Babylonian cubit to convert from ancient to modern units. Lovett has specified not only the likely outboard profiles and elevations but also detailed deck plans. They show Lovett’s other theories of how Noah lived on board and managed all the animals that the Ark carried. 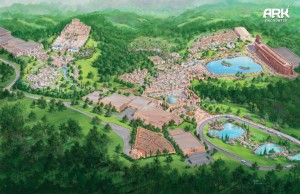 Ark Encounter as it will appear when complete. Drawing: Answers in Genesis

Ark Encounter, LLC have changed their original plans. They still plan to build all the eight areas of the 800-acre park that they originally designed. But they will build these exhibit areas one at a time, not all at once. The slow economy has slowed their fund-raising. So they will build the replica Ark first, and have raised more than $5 million for this phase alone. This will generate income while they raise money to build the other areas:

Answers in Genesis will also expand the Creation Museum, to take advantage of the crowds that they expect Ark Encounter to draw. The Museum now has its own observatory and 1000-seat auditorium.

Related Topics:biblecreationhistoryIsraelMiddle East
Up Next