Yesterday the House Oversight and Reform Committee released the winning (booby prize!) entry in a GSA video contest. Refreshingly, it shows “civil servants” at their shameless worst. How they love to spend other people’s money on TV sets, cars, and vacations outside conferences! A nice gig, if you can get it. Now will the American people rise up in French Revolution-style outrage? Maybe. But they should first realize that they have brought this on themselves.

Lisa Rein at The Washington Post has covered the story ever since GSA Administrator Martha Johnson resigned in disgrace on Monday. The Obama administration asked for her resignation, and those of two ranking deputy administrators. Why? Because the GSA held a conference in Las Vegas in October of 2010. Early in his term, the man now holding office as President told private companies not to meet in Las Vegas on the public dime. But the GSA did. Worse, they spent $829,000, including a $32,000 reception, a clown, and a mind reader, according to Rein’s piece.

Yesterday, Rep. Darrell Issa (R-CA), chairman of the House Oversight Committee, revealed something more about that vacation conference. Someone held a contest for producing short videos. Behold the winner of the GSA video contest!

Obama better prepare, when I’m Commissioner.
I’d have a road show like [Acting Regional GSA Administrator for Region Jeffrey] Neely, every time you see me rolling on 20s yeah, in my GOV.
Spend BA 61 on all fun.
ATF can’t touch GS-15 guns!
Cause I buy everything your field office can’t afford.
Every GS-5 would get a top hat award.
Donate my vacation, love to the nation,
I’ll never be under OIG investigation.

Wrong! The Office of the Inspector General (OIG) did investigate. The IG found that particular booby prize and turned it over to Issa’s committee. (Below is the long version.) Not only did this video win the GSA video contest. The conferees played it at their closing banquet. How they must have laughed at the rubes who paid for their $829,000 vacation conference! 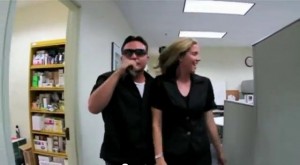 For a century, the American people have voted for a government to give them goods and services, not to protect their freedoms. They made the same mistake the Roman people made. That’s why generations of Roman emperors gave their people “bread and circuses” to keep them quiet. That GSA video contest should have shown those civil servants lying down on couches around a U-shaped table piled high with those $4 shrimp. Nothing has changed since Roman Imperial days, except the technology of work and especially play.

That’s not the lesson that James Madison wanted to take from the Roman Republic and Roman law. The United States Senate and House directly mimic the Roman Senate and Popular Assembly. But the Roman citizens who invented those concepts lived independent lives. When the people started depending on government, government grew. And it took their liberty as well as their money. And this government is taking liberties as well as moneys today. Worse, it is taking wealth that the people have not yet created. (And under so many government rules, the people cannot create enough wealth to satisfy present appetites!)

So if the people really want to learn something from the GSA video contest, let them learn this: As long as the people themselves depend on government, the government functionaries will “skim the cream” in that precise way. The money that the GSA video contest cost, and even the money that the entire event cost, is chicken feed in the federal budget. Even if GSA employees behaved like model office workers, that would not excuse a government that does for people what they should do for themselves. Nor would it excuse a government that takes from some for the benefit of others. That GSA video contest winner showed only that the GSA staff are human, and act on human nature.

Suppose instead that the GSA never held lavish junkets? Suppose that the GSA video contest showed workers behaving like models of efficiency and propriety? That would be more chilling. The most effective propaganda comes from those who really behave the way they want the people to think they behave. That also makes it the most dangerous propaganda.

But as it happens, GSA employees behave the way anyone would behave when spending other people’s money.

It’s just a little money, a few pennies out of every hundred bucks; they’ll never miss it!

In fact, notice that the GSA video contest winner was brazen enough to heckle the “President.” No wonder Obama expressed such “outrage.” Not because the GSA employees spent so lavishly, nor even because they “blew the gaffe.” They insulted him. They threw their insolence right into his face.

Obama: who is he?

If these were boastful then we should be commending them for their honesty, not castigating them for profligacy. The first video, while it is in the style of a wasteful person, actually isn’t about being wasteful with government resources, it’s about using them responsibly while dedicated to service of the american people. I see no evidence that the employees did it while on the clock, or caused any loss to the American taxpayer in the process. The line about never being under investigation is not about getting away with things, indeed the oily sort of criminal that gets away with crime is always under investigation, it’s about being so disciplined that investigation is never called for.

Are you being sarcastic or obtuse? I honestly cannot tell. What I saw on that video was an insolent jerk boasting that he’s going to get away with all sorts of lavish spending.