New Jersey’s courts made themselves a laughingstock by their handling of our Obama eligibility case. The people of New Jersey should hang a plaque at the door to each courthouse:

Welcome to Disneyland! See with your own eyes living cartoon characters masquerading as judges!

Administrative Law Judge Jeff Masin, alias “Dumbo,” heard arguments regarding Barack Hussein Obama’s right to place himself on ballots in New Jersey. This judge epitomizes the lack of understanding of American Common law on the bench. (Or did he take orders from the political bosses?)

Masin, quite simply, pre-judged the case. Sour grapes? I think not. Why did Masin hold up the Georgia ALJ’s decision on the Obama eligibility issue and wave it about? Why did he, smiling, boast that he was a personal friend of Judge Malihi?

I know Judge Malihi; he’s a friend of mine.

Now why did he have the decision by Malihi (the Muslim with a persona history) on his desk, and why did he throw it in our face? How does a decision in other State (and a defective one, at that!) affect the election laws in the sovereign State of New Jersey?

Does America know that even the Board of Elections’ Director, Mr. Robert Giles, before witnesses and the press said that the State had no proof of eligibility for Mr. Obama on file in New Jersey, now nor in 2008? Or that Alexandra Hill, who argued Obama’s case before Masin, said in effect,

No evidence of his eligibility is needed, even “Mickey Mouse” can be on the Presidential ballot in New Jersey.

If you are a judge, do you not think to yourself, Doesn’t the law require a candidate, and those submitting signatures to nominate him, to sign off on his eligibility to the office he seeks? Oh, but that would adhere to the election statutes.

Obama eligibility: the concession that wasn’t

Secondly, defense counsel conceded that there is/was no evidence. She even declined to admit the computer image (read: forgery) as evidence of eligibility. So has not the public and the court a right to know? Why didn’t Masin ask for proof? Did he decline because no proof was available? Or did he seek to avoid asking for proof? Did he, perhaps, fear that he might prove a forgery is all we have of Obama’s birth certificate?

Mason behaved like a political hack. He refused plaintiffs an opportunity to call expert or other witnesses on this or any other evidentiary matter on Obama eligibility. A judge is supposed to know the law. Why did he not realize that such a denial is inconsistent with court rulings in other cases? By refusing to hear argument for consistent judicial treatment, he denied us due process of law. Our legal culture strongly associates consistency with fairness and correctness. Once he had before him a question of a forged birth certificate, he should have made the defendants introduce evidence. None exists. So what does he do? He joins other “hoodlums in black robes” who protect their Marxist master, and d__n the public.

Masin even contradicted himself. First he disallowed our witness after Ms. Hill conceded, on the record, that she would introduce no evidence, and especially would not introduce the “Internet image” nor cite it as evidence of Obama’s birthplace. Judge Masin, turning to our counsel, Mr. Apuzzo, said:

I’ve just won your case for you, if you prevail on the question of Obama’s obligation to prove his eligibility.

Precedent on due process

The Supreme Court of the United States has stated affirmatively that for a decision to qualify as proper due process, a judge must base it on evidence, and list that evidence. I want to know: where is the evidence for Obama’s eligibility? There is none!

…that for a full and fair hearing to have occurred, the courts must demonstrate compliance with elementary legal rules of evidence, and must state reasons for their determination, and indicate what evidence was relied on.

This fact is without contradiction in all the Obama eligibility cases to date. No evidence exists nor ever did exist in New jersey that Barack Hussein Obama is eligible to be on ballot. The law clearly says: anyone running for office in New Jersey must qualify to hold that office. Within hours Judge Masin ruled for the defense, and disregarded proper election procedure.

I won’t go into the lame decision by the Secretary of State Kim Guadagno to affirm Masin’s decision that was shocking to say the least. Except to say: a source within the Republican Party told me:

Sometimes you have to do as your told.

If true, that will come back to haunt her.

The Questions that went unanswered on Appeal: 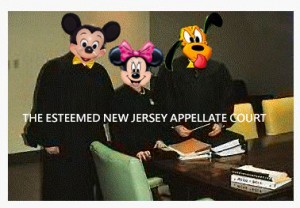 The three cartoon characters at the Appellate Division, Mickey, Minnie, and Pluto (Judges Fisher, Baxter, and Carchman), ignored the question they should have asked. What evidence did Judge Masin rely on in his decision-making process? They completely ignored the law. Worse yet, they didn’t care about what the law says or requires.

To get a judgeship in New Jersey you need only two things:

I said it before, and I say again: Where is the evidence? In this or any other Obama eligibility case, no one has introduced any. And in our case, the judge decided without evidence.

So what did the judges on that panel not understand? Any fair-minded person would think they are either corrupt or under orders. The presiding Judge, Clarkson Fisher (the disheveled judge wearing the open robe), needs not only a course on courtroom etiquette but also on proper due process. When you make a decision, you need to explain it on the merits, the evidence, or the applicable statutes. ALJ Masin ignored all three.

Those three panelists must believe they can decide from political interpretation of the law, or however the boys in the back room tell them to rule.

One more thing damaged the dignity of the court. Defendant/Respondent’s counsel were too busy playing “kissy-pooh” with the judges. Watching them interact, with all their warm fuzzies, disgusted those who sat in that courtroom and watched. Right after their performance, many spectators dashed to the rest rooms to throw up.

Next Stop on the Judicial Circle Jerk: The Supreme Court of New Jersey

ALJ Masin and those three Disney characters on the Appellate Division ruled by judicial fiat. No one can argue with that. The next stop is the Supreme Court of New Jersey. They wrote the book on judicial activism, and that should frighten everyone. They will never address this Constitutional challenge. They’ve proved in the past that they lack not only integrity, but also courage. Screw the future of the State and the Country! Sadly this group is Looney Tunes on parade.

If history tells us anything, we can expect more of the same. The modus operandi in the Supreme Court of New Jersey is to rule without rhyme or reason. Am I pessimistic? I think not! Does the Torricelli-Lautenberg case ring a bell? Or COAH? Or maybe the Abbott school funding cases? (And how about the earlier Robinson case in 1976, which is why New Jersey has an income tax!) D__n proper procedural, due process, the statutes, or legislative intent. Here in New Jersey the Constitution is just an antiquated document. It once had meaning, but that was a long time ago.

If the Justices ever acted on proper law and procedure, I would be optimistic. But as we have seen, the Hoodlums in Black Robes can declare whatever the establishment tells them to declare. Masin declared that Mr. Obama was born in Hawaii and is a “natural born citizen.” The Appellate Division, without a shred of evidence or supporting law, declared on page 3 of their decision:

We affirm substantially for reasons set forth in ALJ Jeff S. Masin’s through and thoughtful written opinion of April 10, 2012, as adopted by the Secretary on April 12, 2012.

That’s it! Evidence be d____d! He had no evidence or precedent to base his decision on. So what? Let the Constitution be d____d, too. Simply put, the rules do not let defendants avoid answering a legal allegation. But, the Appellate Division found, Masin (Dumbo!) made a “thorough and thoughtful” decision. Give me a break.

I only pray to be wrong. I will gladly apologize publicly to those sitting on the bench, if they apply the law properly. But my guess is Jimmy the Greek would put a thousand too one against the Supreme Court of New Jersey overturning their moronic cronies or adhering to the Constitution. All we can expect is the same old same-old, and New Jersey judges to create their own rules and law.

Where Do We Go From Here? Tomorrow Part II, The Shocking Truth!

This court case really was no surprise as men did not rule on the basis of the evidence, but mice sat there and did Obama and his charading media and buddies’ bidding.

These gutless cowards are like the man who actually thought that he was dead. He was told by the doctors and nurses that dead people don’t bleed. The man, upon hearing this, grabbed a knife and poked himself. Blood began to gush out. Immediately, horrified, the man exclaimed: “Dead people, do bleed!”

These unpatriotic bench warmers have created their own world of unreality. They, like others and their Siamese related mentally disturbed media, must find a whole new brave world in the bunched up environment of Obama’s cosy behind:

Very mature critique of the judges, especially when coupled with the “enhanced” photo.

It takes one to know one.

How DARE this judge use another case as a legal precedent!

Another case in another State. Such a case cannot bind or set precedent across State lines. Only a federal case can do that.

No one said it was binding.

From liberal Wikipedia where everything we don’t agree with is wrong:

“Persuasive precedent includes cases decided by lower courts, by peer or higher courts from other geographic jurisdictions, cases made in other parallel systems (for example, military courts, administrative courts, indigenous/tribal courts, state courts versus federal courts in the United States), statements made in dicta, treatises or academic law reviews, and in some exceptional circumstances, cases of other nations, treaties, world judicial bodies, etc.”

Again, how DARE this judge use legal precedents!

Precedent is all very well. But this one is badly flawed.

“Only a federal case can do that”

There just was a federal case – Tisdale v. Obama that argued many of the same points. The lower District Court ruled:

The case was appealed to the Fourth Circuit Court of Appeals. They ruled,

“We grant the motion to file an amicus curiae brief and file it out of time. We deny all other pending motions filed by Tisdale. We dispense with oral argument because the facts and legal contentions are adequately presented in the materials before the court and argument would not aid the decisional process.”

The amicus brief that the Appeals Court refers to is one filed by attorney Mario Apuzzo. He is the same attorney in the New Jersey case cited above and in his amicus brief he made the same arguments.

It looks like it is time to move on and work to get someone else elected in November.