The decision by the Appellate Division of the New Jersey Superior Court was as terse as it was swift. It came down one day after the oral argument, and ran to only three pages. The substance of the decision ran like this:

We have carefully considered appellants’ arguments and conclude that these arguments are without merit. R. 2:11-3(e)(1)(E). We affirm substantially for the reasons set forth in ALJ Jeff S. Masin’s thorough and thoughtful written opinion of April 10, 2012, as adopted by the Secretary on April 12,2012.

The court cited this rule that lets the Appellate Division affirm a lower court without an opinion.

The court also cited this decision by Judge Masin. Masin handed this down on April 10, after a three-hour hearing. 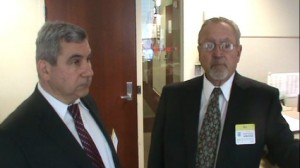 Nick Purpura, the lead plaintiff/appellant in the case, reacted in outrage.

What do they mean, “ALJ Jeff S. Masin’s thorough and thoughtful written opinion”? What thought? There was no evidence! How could anyone rule that Barack Obama was born in Hawaii when there was never any evidence?

In the course of that hearing, Purpura’s lawyer, Mario Apuzzo, tried to call a witness to show that the White House PDF file, showing what looks like a birth certificate for Barack Obama, was a forgery. Judge Masin disallowed the witness after Alexandra Hill, arguing for Obama, conceded that she would not introduce the birth certificate into evidence. In fact, she never introduced any evidence to show Barack Obama’s identity or birthplace. Judge Masin, turning to Apuzzo, then said,

I’ve just won your case for you, if you prevail on the question of Obama’s obligation to prove his eligibility.

Masin meant by that, that the defense counsel would not introduce that White House PDF file or any other purported copy of the Obama birth certificate. Therefore, Apuzzo need not call his witness.

Nevertheless, Masin decided, hours later, to presume that Barack Obama was born in Hawaii and was therefore a natural born citizen. He also ruled that Obama, and his surrogates, need not show eligibility to nominate him in a primary.

Apuzzo carefully documented, in his brief, that Masin did not adequately follow New Jersey law. That law says that anyone running for office in a New Jersey election must qualify to hold that office. Barack Obama has not made any kind of showing. No Obama eligibility evidence is on file, even from the Election of 2008. Elections Division Director Robert Giles said that to Apuzzo and Purpura on the day they filed their challenge.

In a reply letter the day before the argument, Apuzzo attacked the respondents’ argument that the court lacked subject-matter jurisdiction, and that the New Jersey Secretary of State lacked discretion in ballot placement for Presidential elections. He also reiterated the heart of his Obama eligibility challenge: that Barack Obama is not a natural born citizen.

The Attorney General’s office had also said that Purpura and Moran had waited to long to act. At oral argument, Judge Clarkson Fisher hinted at that by saying that the Elections Division had already sent printed ballots to various county clerks. Apuzzo refused to concede that, but left it to the court to prescribe a remedy.

Apuzzo was not available for comment. Purpura vowed to appeal to the New Jersey Supreme Court.

Obama eligibility: Arpaio in the clear - Conservative News and Views