Putative President Barack H. Obama told the American people today what he wants to do. He wants to steal large amounts of money from those who create wealth. He set up the “fiscal cliff” to do just that. And if anyone stands in his way, the country can collapse for all he cares.

Obama and the “fiscal cliff”

Last year, Barack Obama set a neat trap for anyone who objects to his tax ideas. First, the tax rate cuts that President George W. Bush signed into law in 2003, all expire next New Year’s Day. Second, the law will cut spending in every department equally, including the Department of Defense. Yesterday the Congressional Budget Office warned that the economy will recede if those laws take effect.

Rep. John Boehner (R-OH-8), Speaker of the House, said he was willing to see the government bring more money in. But not if it meant raising tax rates.

Then, early this afternoon, Obama insisted on raising tax rates. He used the phrase “balanced approach.” That means only one thing: soak the rich, with higher tax rates, at least for them. (Never mind that such a thing is an unconstitutional bill of attainder, and always has been.) He insisted that most Americans support soaking the rich. Actually, most people who voted seem to feel that way. Even so, that doesn’t make it right. So when he says,

Our job now is to get a majority in Congress to reflect the will of the American people.

He really wants to say,

I’m a thief, and a leader of thieves, and you just stick ’em up and hand it over, if you know what’s good for you!

Those increased tax rates will destroy jobs in America by hurting small businesses across the country.

He also reminded everyone that the House passed a proper budget. Which the Senate never voted on.

That might not matter to Obama. It certainly does not matter to Senator (and Democratic Floor Leader) Harry Reid (NV). He said almost the same things Obama said about most Americans wanting to soak the rich.

What the American people should understand 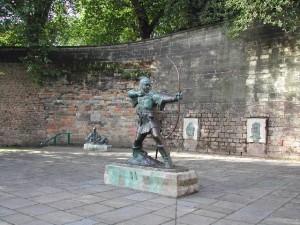 The American people should understand something that Obama ignores, and too many people miss. Bill O’Reilly was right: most who voted on Tuesday want “stuff.” Obama promised to give them “stuff.” He would buy this “stuff” after stealing from “the rich,” as the outlaw Jesse James cynically did. (Robin Hood, the usual “Prince of Thieves,” was not a thief. He really took back money that the government first stole from others, and gave it back to those same others.)

President Gerald R. Ford summed up the big problem with relying on government to give you “stuff”:

In other words: a government that can steal for you can steal from you just as quickly and easily!

Jon Healey of The Los Angeles Times seems to understand this. He writes:

There’s much more at issue here than just the income tax rates for the small percentage of households above Obama’s threshold. And it’s likely that any deal will cause pain not just for those taxpayers but for everybody.

Now that‘s being honest. That’s more than Obama can be.

Sorry, Terry, the fiscal cliff goes back a lot farther – to the creation of the Federal Reserve! And it was greatly worsened by Nixon (R) taking us off the gold standard. Bush didn’t help much with his expensive war, and Obama is merely reaping decades of benefits of bad leadership. Giving him all the credit is just too much!

It’s time to stop lying about your president, Terry. You lost. Get over it.

President Obama isn’t proposing to steal anything from anyone; he’s proposing that those most able to afford a small tax increase receive one, while everyone else’s tax rates stay at the same level. All he’s trying to do is rectify the ruinous, short-sighted tax cuts imposed on America by George W. Bush. Bush and his cronies are the real villains here – they had their chance to prove that “wealth creators” would benefit the country in the long term after a tax cut and all that happened was a huge, crippling deficit was created.

You can deny that all you want, but it doesn’t change the facts.

What do you think differential tax rates amount to? Theft.

It’s not your money. Nor is it Obama’s money, nor Harry Reid’s money.

And when you take something that does not belong to you, without the consent of the owner, that is theft.