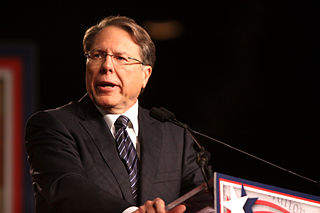 Wayne LaPierre was right on Friday when he said the good guys need to have guns. He was right again yesterday morning to stick to that. And his critics haven’t legs to stand on. They keep saying to take the guns away from the people. That, of course, is all they’ve ever wanted.

Who is Wayne LaPierre?

Wayne LaPierre serves as Executive Vice-President of the National Rifle Association. He won that post in 1991. As strange as this might seem, Wayne LaPierre wasn’t always a Republican. Before he joined the NRA, he worked in the office of a Democratic Virginia State delegate. (They call them Delegates in Virginia, and Representatives in Congress.)

Wayne LaPierre once said a deliberately shocking thing before. In 1994, Timothy McVeigh, with or without Iraqi help, blew up the Alfred P. Murrah Federal Building. Those who want “gun control” went out in full cry. Wayne LaPierre said, in a letter to raise money, that federal agents were “jack-booted thugs…wearing Nazi bucket helmets and black storm trooper uniforms.” Or so said Bush the Elder when he resigned from the NRA. The Internet search engines show this quote all over the Internet—but with no context. No one has a copy of Wayne LaPierre’s original letter. (Wayne LaPierre later took it back. But CNAV has seen no evidence to judge whether what Wayne LaPierre said should really have made a person of good will shudder.)

In the spring of 2000, Wayne LaPierre said another shocking thing, but one directly to the point of today’s debate. He said President Bill Clinton had “blood on his hands.” Why? Because, he said, Clinton didn’t enforce laws already on the books, and so let criminals shoot people. Why? To make a case for taking guns away from everybody.

If you “just don’t like guns,” of course that will shock you. But remember what General and President George Washington said of government:

Government is not reason; it is not eloquence; it is force! Like fire, it is a dangerous servant and a fearful master.

Now what Wayne LaPierre says makes sense. He sees the dangerous servant and the fearful master. What better pretext for taking away people’s liberties than saying that a society that respects those liberties is not safe? Remember also what Benjamin Franklin said about that.

On Friday, December, 14, someone, or a group of someones, shot and killed twenty children and six adults.at Sandy Hook elementary school in Newtown, CT. We presume that Adam Lanza, age 20, did it. (Police found him dead at the scene. His body held a bullet from one of the three guns they also picked up at the scene.) We also presume he acted alone. (Never-confirmed reports said some witnesses saw two men in black running into the woods as police arrived.) And for one solid week, neither Wayne LaPierre nor anyone in the NRA said a word. But the gun control advocates said plenty of words. That included all the usual suspects, including Senator Charles E. Schumer (D-NY).

Then, last Friday, Wayne LaPierre said the shock-jock thing heard round the world: Schools should have armed guards, either active-duty police or retired police or military. Then he said:

When I first heard that, I wondered whether Wayne LaPierre read and copied my posts on Linkedin.com and Sodahead.com, not to mention my comment space:

The only sure defense against a wacko with a gun, is you with a gun.

My own detractors, on my comment space and elsewhere, know who they are. Wayne LaPierre got the same argumenta ad hominem.

Excuse me, but you cannot call an idea paranoid if it’s true. (Just as you can’t accuse anyone of libel or slander for telling the truth.) And what is the eutopia of the critics? One in which no person, except a law-enforcement officer or an active-duty member of the armed services (or a reservist on call-up), owns or even touches a gun.

Yesterday Wayne LaPierre went to the kangaroo court called Meet the (De)Press(ed) (NBC-TV). (Hat tip to Rush Limbaugh for his colorful re-titling of the Sunday gabfests; cf. (De)Face the Nation.) To his credit, Wayne LaPierre didn’t back down.

If it’s crazy to call for putting police and armed security in our school to protect our children, then call me crazy. I think the American people think it’s crazy not to do it.

[Actually, CNAV has a better idea: train a number of school administrators or other employees to stand that armed guard by themselves. Better yet: offer this training to the headmaster. If the headmistress and faculty of Sandy Hook Elementary had this training, they could with one (or maybe two or three) bullet(s) among them have stopped the attack directly the intruder(s) shot his/their way in.]

Wayne LaPierre also called Senator Diane Feinstein (D-CA) on the carpet for proposing yet another “assault weapons” ban. “A phony piece of legislation…built on lies,” he said, adding that “It’s not going to make any kid safer.”

People who live in glass houses shouldn’t shoot their guns, or their mouths, off.

It’s all very well for David Gregory, host of Meet the (De)Press(ed), to make fun of Wayne LaPierre for “not being reasonable about gun control.” But not when Mr. Gregory sends his own kids to a guarded school.

People will say that “ordinary civilians” can’t stop crime without hurting innocent people. Tell that to the 15-year-old who used his father’s loaded gun to take down some burglars in Houston, TX. The weapon of choice: a Bushmaster AR-15, the same weapon that Adam Lanza (if it was he) used at Sandy Hook.

Tell that also to Suzanna Gratia Hupp, who was in Luby’s Cafeteria in Killeen, TX, when someone shot a bunch of patrons. She had a gun, but left it in her car. Result: murder.

No wonder Gabe Zolna called our putative President “the best gun salesman, ever!”

Chuck Schumer can only say:

Why don’t we stop the bad guy from getting the gun in the first place?

Hel-lo-ooooooo! You can’t “stop the bad guy from getting the gun in the first place.”

If guns are outlawed, only outlaws will have guns.

Even if you could, you’re back to what Benjamin Franklin said of those who give up liberty for safety.