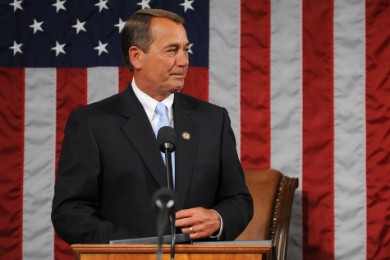 The Tea Party and the GOP establishment are at all-out war. The war began during the 2012 election campaign. It has broken out in earnest in the last week. Now no one can deny it. How it plays out, and who wins and loses in this war, might surprise everyone.

The latest outbreak came after Representative John Boehner (R-OH-8), Speaker of the House, knew that his latest store giveaway would not pass the House. So he pulled the bill and told the House to go home for Christmas. (Putative President Obama did the same, and even told everyone to get drunk on eggnog so maybe they’d come back and be less inhibited about raising taxes.) Soon after that, some asked whether John Boehner could lose his Speakership. In answer, Representative Steven LaTourette (R-OH-14) said this:

That’s the same 40, 50 chuckleheads that all year, starting with HR 1, the entire Congress has screwed this place up. And – and so, you know – and he has done everything in his power to make nice to them, to bring them along, to make them feel included. But it hasn’t mattered.

Whom was he calling chuckleheads? (And is he any relation to Gilles de la Tourette, who famously described a syndrome of trash talk as a nervous tic? If not, he’s surely suffering from it.) Answer: the unofficial Tea Party caucus in the House. (See here for a clip of him saying that, and what Chris Wallace’ guests thought of that.) The day after the “Plan B” debacle, LaTourette teed off again:

Well, they are chuckleheads. And by chuckleheads, I mean that, you know, our responsibility in the majority is to govern. And you don’t put forward an agenda no matter which party is in charge successfully unless you can deliver enough votes on your side to put the bill in play with the Senate and the president.

And, you know, so the same people that say that we can’t go down the path that President Obama wants to lead us or Nancy Pelosi, they haven’t gotten it through their heads that every time Speaker Boehner can’t garner 218 votes on our side, he has to then go over hat in hand to the Democratic leadership or the White House. And anybody that thinks that then becomes a more Republican bill is a chucklehead.

That, of course, is a threat. So he would seek the votes of the most liberal Democrats in the House to pass a bill of attainder against any person making more money than Barack Obama, and by extension Mr. LaTourette, think he should make. As some Democrats have urged John Boehner to do.

Pick an outsider as Speaker?

Nor is Steven LaTourette alone in his disdain for the Tea Party. Norman J. Ornstein of the American Enterprise Institute gave more GOP establishment opinion. He accused the Club for Growth of

putting million-dollar bounties on the heads of apostates who vote for any taxes.

And he called the conservative alternative media a “wind machine.” But he also singled out fifty Representatives, probably the same fifty whom LaTourette called chuckleheads, as immune to “reason.”

50 or more House Republicans come from districts that are homogeneous echo chambers, made that way through redistricting and the “Big Sort” that has like-minded people living in close proximity to one another. None of them is threatened in a general election; all could be unseated in a contested primary.

These fifty are the Tea Party caucus. Mr. Ornstein just accused those who live in those districts of self-selecting their districts. Is that some sort of crime against good political order? And did he just threaten to “primary” them?

Ornstein has a larger point. The Tea Party caucus, and others in the House, do not want John Boehner to be Speaker anymore. They even have a plan to move for a secret ballot in the Speaker’s race. And they could easily run a spoiler who could take enough votes from Boehner that he could not get more votes than all others put together. That’s what the rules of the House say a Speaker needs.

So what does Mr. Ornstein say to that? Let the establishment put in a total outsider to be Speaker, one who is not even a Representative. His candidate: Jon Huntsman. Who recently served the Obama administration as ambassador to Mainland China!

The Tea Party fights back

The Tea Party will fight, and fight hard. Rep. Tim Huelskamp (R-KS) is one of four Tea Party men whom John Boehner stripped of their committee seats. He warned that any Republican who voted to raise taxes, no matter who was the target, would face a primary challenge. (See here to play his interview with Newsmax.com.) And about John Boehner, Huelskamp said this:

The way the speaker has negotiated behind closed doors is not helpful and starting by granting the president’s idea that we should raise taxes on someone, that was the wrong place to start.

He gives up things before he even has to!…I have never seen such an inept Speaker of the House in all my life.

Huelskamp said something more, looking ahead to the 2014 Midterms:

If Republicans would like to return to the majority in the Senate and actually take back the House, the best way to do that is promoting and rewarding and advocating conservative pro-growth principles, not attacking those who are doing so.

Actually take back the House? Clearly Huelskamp does not feel that true conservative Republicans control the House. The Tea Party almost surely agrees.

Related Topics:economypoliticianstaxTea Party
Up Next

Marijuana – why make it legal?