Fox anchor Bill O’Reilly and his co-author Martin Durgard recently signed to write Killing Jesus. The excitement and anticipation has piqued a lot of Americans since O’Reilly’s Killing Lincoln and Killing Kennedy have both been a great success.

The hope of new blood being infused into the narrative of Jesus Christ’s life and ministry has since met with apoplexy since O’Reilly’s interview with Actress Roma Downey (Touched by an Angel) and husband Mark Burnett on The Factor.

O’Reilly said the New Testament contradicts itself and that “a lot of the Bible is allegorical,” which Roma and Mark refused to concede saying they believed that the entire Bible is completely inspired by God and totally trustworthy.

Is it man or the Bible that contradicts?

All scripture is given by inspiration of God, and is profitable for doctrine, for reproof, for correction, for instruction in righteousness. (2Tim 3:16)

Yet O’Reilly has chosen to contradict that, and join those who think the bible is only inspired in spots, and they need to hope they are inspired enough to spot the spots.

It is disappointing at best to see Harvard educated O’Reilly caught up in one of the most common wisdom of the day, worn out old axioms about biblical contradictions. There are virtually no contradictions that 2,000 years’ worth of systematic theology, archaeology, New Testament history, epistemology, hermeneutics, soteriology and apologetics have not proven to be anything even slightly resembling a contradiction.

The historicity of the New Testament far surpasses anything in the secular world including Tacitus, Josephus and the remaining books of Roman history. Was all that accuracy just a backdrop for a Savior and his Apostles who after all may or may not know what they were actually saying? This is contradiction with a final layer of presumption so typical of those who are not well versed in all aspects of the scripture.

Was Jesus the confused, misinformed and dumbed down version of his Father?

Jesus made it clear that he and the Father were not only one, (incarnation) but that he was pre-existent and co-eternal with the Father. “And now, O Father, glorify thou me with thine own self with the glory which I had with thee before the world was.” (Jn 17:5) How could someone who witnessed the creation have any doubt about how it happened? O’Reilly’s doubt about Adam and Eve, or Noah’s Ark raises a familiar question once asked by God to Job.

Where wast thou when I laid the foundations of the earth, declare, if thou hast understanding. (Job 38:4)

The absurdity is that a Harvard educated person would presume to second-guess an actual eyewitness to specific events and label them as allegory. Christ attested to Adam and Eve and Noah and in no uncertain terms recognized them as historical figures not allegories. Let’s see – do we want to go with a fleshy newsman or God in the flesh? 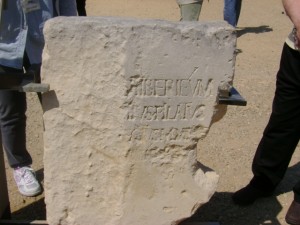 Killing Jesus is supposed to ask, and answer, why Jesus really died. This is where we find ourselves holding our breaths. Many have come and gone in the secular world with answers that hardly mean a thing. It was the angry and jealous Jews, the strict enforcement of the Pax Romana or the complete failure of Jesus to finish his calling and ministry; these are but a few of the answers we’ve heard so far.

Anyone remotely familiar with the cause of Jesus’ death knows there was but one reason he died and it was pre-ordained from the foundation of the world – he came to die for the sins of the world.

No one could answer the question better than Christ himself. Just hours from being crucified he said

Now is my soul troubled; and what shall I say? Father, save me from this hour: but for this cause came I unto this hour. (Jn 12:27)

When asked by Pontius Pilate the Roman Procurator why he did not defend himself against the false accusations of the Jews he gave the definitive answer.

To this end was I born, and for this cause came I into the world, that I should bear witness unto the truth. Every one that is of the truth heareth my voice. (Jn 18:37)

Adding anything to this answer would be blasphemy at worst and foolishness at the least.

Mr. O’Reilly has many good questions to ask and has skillfully answered many of them with great acumen and grace. In a recent powerful and well written piece on billoreilly.com, entitled “What the Babies Would Say” he plies his craft to the max in a cutting treatment of the abortion question.

It would be advisable to frame the question of why Jesus died, but going a good bit beyond “what would Jesus say” and directly on to “What did Jesus say.”

It would also be advisable to keep in mind that if you are going to speak as an authority on the bible you will be seriously faulted, criticized and perhaps dismissed completely if you begin by denying the authority of the scriptures.

Calling any part of the scripture allegory and then speaking as an authority on it is dangerously close to high nonsense and while it may be happily heralded by secularists it will be summarily rejected by most anyone who trusts the bible explicitly.

Sale-ability and believability are quite opposite in nature, it depends on which of these will be engaged to determine the success of Mr. O’Reilly’s latest endeavor.

Calling any part of scripture ‘allegory’ may not be the most heinous crime of the century, but it should be fair warning to anyone who does so; that the caution lights have already gone on in the hearts of millions of biblically grounded believers. We have already heeded the warnings we were given – to wit:

Beware lest any man spoil you through philosophy and vain deceit, after the tradition of men, after the rudiments of the world, and not after Christ. For in him dwelleth all the fullness of the Godhead bodily. (Col 2:8, 9)

American Prophet.org has since 2005 featured the articles and reports of journalist Rev Michael Bresciani along with news and reviews that have earned this site the title of The Website for Insight. Millions have read his timely reports and articles in online journals and print publications across the nation and the globe. Follow us on Twitter and Facebook