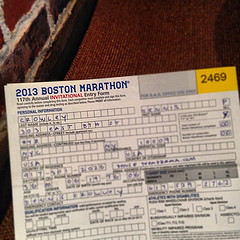 Someone – authorities don’t know yet whom he worked with– bombed the Boston Marathon today. At least two people died. More than twenty others (at last report) lost limbs or suffered other severe injury. Evidence thus far says this was a terrorist attack. But who did it?

The scene at the Boston Marathon

The Boston Globe has this live blog feed. The Boston Athletic Association, which runs the Boston Marathon, has a live-blog feed at its home site and its Facebook page. Other reports have already come out at The New York Times, Foxnews.com, The Atlantic Wire, and NBC News, among other outlets.

Two people are dead at time of posting. Authorities list at least twenty-three more with injuries. Massachusetts General Hospital has received at least nineteen of these. Some have traumatic amputations, the kind a soldier expects to risk in battle. (One witness told a Fox News reporter of lending his belt for use as a tourniquet in one such case.)

One witness described pellets, the size of bird shot, in his backpack. That fact alone means these bombs were anti-personnel bombs. Other witnesses described smelling cordite and seeing severed limbs lying about Boylston Street and Copley Square.

The bombs went off after the fastest runners had already finished the Boston Marathon. The larger crowd, or “field,” of runners were just coming in. The BAA has re-routed those still in the race toward the Boston Common. The FAA has locked down the airspace over Boston.

At 4:54 p.m. ET, the Boston Police announced something with an almost certain connection. Another incident occurred at the John F. Kennedy Library at about 4:30 p.m. 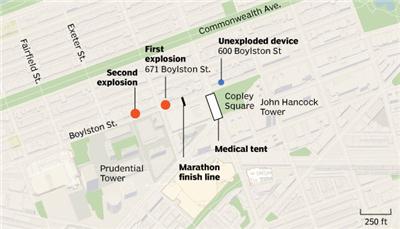 And now the speculation begins: who bombed the Boston Marathon? Fox News reported at about 4:15 p.m. ET that the Boston Police have a suspect at a hospital in Boston – they won’t say which one. The New York Post now identifies the suspect as a Saudi national. (At 6:00 p.m. ET, the Boston Police denied they had anyone in their hands.)

They want the people to panic, so they’ll give up more of their rights for the little bit of safety they think the government will give them….You watch. You’ll see young men patrolling the streets, armed with carbines and other semi-automatic weapons.

That would look like Tel Aviv – or Jerusalem, or the Golan Heights.

Aside from the “false flag” question, another question suggests itself: with 2700 Iraq War Marine surplus light tanks, and 1.6 billion rounds of hollow-point ammunition, the Department of Homeland Security could not or did not prevent this?

Worse yet: Nicholas Kristof, columnist for The New York Times blamed Republicans in the US Senate for the Boston Marathon bombing. His theory: Republicans blocked the Senate from confirming a permanent director of the Bureau of Alcohol, Tobacco, Firearms and Explosives. And on that account, the government could not stop a Saudi national from planting at least five bombs. Breitbart News caught his “tweet” on Twitter, and a follow-up as he “took it back.”

Saddam Hussein had WMD after all

“with 2700 Iraq War Marine surplus light tanks, and 1.6 billion rounds of hollow-point ammunition, the Department of Homeland Security could not or did not prevent this?”

Uh what? Firstly there are no light tanks; they’re MRAPs – armoured personnel carriers. The last light tanks in the US inventory were the 82nd Airborne’s M551s, which I believe are now beer cans and wouldn’t have done much good in any case. Secondly, hollow point ammunition isn’t much good if you don’t know who to shoot. The only defence against an attack like this is intelligence, and sadly that isn’t infallible.

Wasting no time in feeding rumours and looking someone to pin the blame on. Seriously, I can’t recall a major crisis in which you have not tried to make it look like Obama is responsible. It’s far too late for your credibility, but if I were in your position I would try to salvage at least some of my dignity. Yes, much of the time after a major crisis such as this, some people will say stupid things. Here’s your problem though. You’re one of them.

And Nicholas Kristof tried to start a rumor that this was a “right wing nut job operation.” Take your complaint to him, not to me.

And if you feel that way about me, then go away and stay away, why don’t you?

Or would I be correct in diagnosing you with obsessive-compulsive disorder? Or even Stalk-O-Rama?

no doubt in my mind it was a muslim scum … when they say nothing at all in the libtard press it says it all . if it was a white dude ,forget about it ,it be all over the place.they know damn well who it was…

I live in Boston. I would like to point out no arrests have been made for the attack, the boston PD have not confirmed that it was a saudi national (and the story there sounds iffy at best, islamaphobic at worst).
Was it a muslim terrorist? Maybe. Was it a false flag operation? probably not. Honestly, your article forgets to mention: VA tech anniversary tuesday, Columbine next saturday, Patriots day was the day of the Waco incident.

Lets be real. Hopefully the authorities know something by now, but you don’t. Neither does the MSM or fox or anyone else.

All we know is that there was a tragedy today and you are politicizing it.

“And Nicholas Kristof tried to start a rumor that this was a “right wing nut job operation.””

That’s suggested by the date. On the other hand Islamists are suggested by the multiple devices. The devices appear to have been either a fairly crude explosive or they only managed a low-order detonation, which seems to rule out al-Qaeda or any other “proper” terrorist group like the IRA. The fact is that right now none of us have the information to reach an informed conclusion. For what it’s worth my money is on Islamists, but a very strong runner-up is a single white man aged 25-50 who doesn’t have any close friends, went to a small Protestant church regularly, owned an AR-15 clone and “kept himself to himself.”

Ah, yes. The tax filing deadline for individuals and partnerships. (C and S corporations need to file on March 15; non-profits send in their Information-only Returns by May 15.)

But April 15 is also the grand celebration for the Kim “Dynasty” in the “Democratic” “People’s” “Republic” of (North) Korea. Though it must surely gall Kim Jong Un that his vaunted “day of retribution,” or whatever he had planned, came and went, and nobody is talking about him. Not. One. Peep.

That aside: Islamist have the “pole position” for my money, too. Lots of fanatics available, and this time they didn’t seek help from an “Al-Qaeda operative” who turned out to be an undercover agent of the FBI. This time they handled it themselves.

“Though it must surely gall Kim Jong Un that his vaunted “day of retribution,” or whatever he had planned, came and went, and nobody is talking about him. Not. One. Peep.”

“This time they handled it themselves.”

Well, that’s suggested by the devices, which appear to have been gunpowder rather than HE. However I wouldn’t be placing any bets on who’s responsible just yet.

I agree with Fergus that the North Korean idea is absurd. There’s plenty of Americans lined up all ready to play with on the DMZ if they wanted to go down that road. Playing tag with the other side along the DMZ is pretty good way of earning your stripes for both NK and SK soldiers.

Islamists? Possibly, possibly not. The style seems a bit weird for your usual run of the mill Al-Qaida-alike though. I’d be more convinced if we’d seen a suicide tactic, perhaps a ramming attack though the cordons into the field with a vehicle (a la Glasgow 2007). Big bang, low risk of exposure, minimal support needed, tried and tested. Also, if an Islamist group carries out an attack, they usually claim responsibility for it very quickly.

Right wing nutjobs? Again possible. The crude design suggests someone inexperienced or untrained in the usual techniques, which makes them more likely than Islamists who have more experience and support to draw on. The militia-patriot-survivalists have been out of the bombing scene for a while, so we’d expect something more along these lines. Also the lack of a suicide tactic makes the nutjob theory more plausible. Generally, the militia-patriot-survivalists aren’t big on suicide tactics.

Lone wolf attacks – regardless of ideology – are also possible, and TBQH probably the most likely. In case of these, the ideology isn’t relevant. if they aren’t attached to a group with a strategy, then it doesn’t matter what they believed. It’d be the worst possible situation, as sure you can punish them, but there is not a great deal you learn that can help to stop them in future. By the very nature of the beast, they are random and your only real defense is to hope they as individuals do something to draw attention to themselves before they blow stuff up – but with small attacks like this, the chances of them doing so really aren’t that high.

A tax-protest group would get a shapely woman to get into the race, and then strip to her birthday suit en route and finish the race that way. Lady Godiva, not Guy Fawkes.

Like Dean Harvey Hicks, or Gordon Kahl? The tax protester movement has a long history of violent extremism.

Two rare cases. And if you notice, each man confined his battle to the taxman. Neither man set out to kill and maim scores of innocent people.

[…] Boston Marathon Bombing story took a confusing turn today. And events did more than confuse some people. They frustrated some, […]

[…] first reports strongly suggested that Alharbi himself had done the Boston Marathon Bombing. That’s not likely. After all, that’s […]

[…] Brothers Tsarnaev from killing three people and maiming countless others at the finish line of the Boston Marathon on 15 April 2013. But within hours, an ad hoc network of rank amateurs “made” both […]