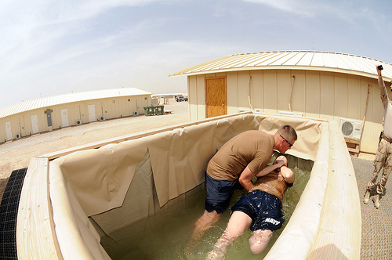 Military religious cleansing: exhibits A, B and C

Fox News Radio’s Todd Starnes carried this full report about what look like religious cleansing efforts. The title of his report ought to raise alarms: “Pentagon: Religious Proselytizing is Not Permitted.” What exactly does that mean? Maybe it means whatever someone against religion says it means, any time he says it.

Michael “Mikey” Weinstein runs the Military Religious Freedom Foundation. On his site, he highlights the column that shows how he really feels about military religious activity. His sentences run on like the Meander River, but he makes his point clear. He, Weinstein, thinks our culture is “bright and promising.” His opponents are “queasy.” And he hates them for it. “Evil, fundamentalist Christian talibanic creatures!” he says. And whom is he screaming about? The American Family Association (AFA), the Family Research Council (FRC), and the Chaplains Alliance for Religious Liberty (CARL). These are evil?

And specifically about military religious activity, Weinstein says “well-funded gangs” (Gangs?) of fundamentalist Christian[s]” hang out in the military. He speaks of “a weaponized and twisted version of Christianity.” Really? How does one “weaponize” a religion or a philosophy? He accused these people of “forcing” their faith on “helpless” fellow service members. And gives no detail to back that up. 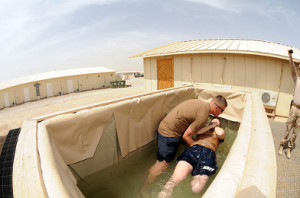 Question: is this what he’s talking about, in the picture at right? In that picture, a Navy chaplain baptizes a SeaBee, because she asked him to. Is this the kind of activity that Mikey Weinstein is so upset about? Because he gives no examples, one can only ask.

Recently he went further: those who share their faith, commit sedition and treason when they do.

Now a man can rant and rave to his heart’s content, and that alone would make no difference. But now the military is listening to him. A week ago the Pentagon met with him about fostering military religious tolerance. And he sharply told the government to punish someone, anyone, for sharing his or her faith on duty. And the Pentagon might oblige him.

What does treason really mean?

Treason, under the Constitution, means making war against your own country or sticking to your country’s enemies. Is that where the Pentagon now stands? Officially?

And sedition does not even bear mention in the Constitution. We haven’t had a Sedition Act since the Presidency of John Adams. Thomas Jefferson let that act lapse. And for good reason: sedition is in the ear of the hearer. It is a completely subjective act. One man’s sedition is another man’s wish that his country change a few things.

And if sharing the Christian faith is now an act of war against the United States, and a threat to the governmental order, what does that make the United States? Well, the United States, according to Mikey Weinstein, is and ought to be a country that knows no god but reason. He denies this, of course. He is not yet ready to carry out his anti-Christian campaign in a forthright or even a mature way. But his rants make zero sense otherwise. When he says his enemies are the country’s enemies, that can mean only one thing.

Why does the Department of Defense lend credence to such a man? Who benefits from a military in which no Christian may share his faith?

Obama knows those in the military, who still have an understanding of Christ, would stand in the way of whatever he is planning, with buying 1.6 billion rounds of ammunition. And building an Internal Security Force. And outfitting said force with 2700 Iraq War Marine surplus light tanks.

That’s why he has consistently disrespected the military since he took office. And why he seeks to change the very nature of the military.

Now, it seems, he must cleanse the military of all religious activity, except perhaps worship of himself.

No, Obama is not a Muslim. No one can be a Muslim and tolerate the things he tolerates.

Instead, Obama is an “Obamist.” He is building a personality cult based on himself. Of course no Christian would go along with that. Or at least, not one who understands the fundamentals of the faith.

And this is what Mikey Weinstein complains about. The only good Christian, to him (so far), is a lukewarm Christian. (Revelation 3:15-16) And to Obama.

Obama is not the first to clean out his country’s military of those who might oppose him on principle. Adolf Hitler did that, too. (He also micro-managed military operations. Maybe that’s how he lost.)

So as Obama’s hand-picked Secretary of Defense starts this military religious cleansing campaign, always ask yourself: who benefits?

Bub Unruh of WND now says the Pentagon walked it all back! That’s often what bullies say when the larger community catches them out in their bullying: “I didn’t mean it!” Well, just what did you mean, Lieutenant Commander Nathan Christiansen USN? This is what you say now. But that isn’t what you said before. And what’s more, Commander Christiansen, you know it, and we know it, and everybody knows it.

Soul of a Nation