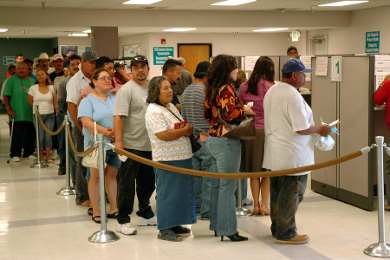 Unemployment in the United States is still as high as ever. The government says the economy added 195,000 jobs. But the best measure of unemployment, that counts everyone, not just those at the unemployment office, went up last month. Worse yet, America has fewer than half its workers working full-time.

Every month, the Bureau of Labor Statistics releases an “Employment Situation Summary.” Here is the latest report – the “June jobs report.” It leads with this:

Look carefully at these categories. “Professional and business services” is fancy Latinate for “temps.” These are “rent-a-drone” jobs. In the Mad Men days, companies assigned these jobs to their secretarial and “junior executive” pools.

“Leisure and hospitality” are the summer jobs at hotels and resorts. “Retail trade” are extra hands in the fast-food joints. Summer jobs always go away in the fall, no matter who fills them.

And the last: “health care” and “financial activities.” These are the armies of bookkeepers and other clerks trying to decipher Obamacare. That kind of increased employment, any free society could do without. 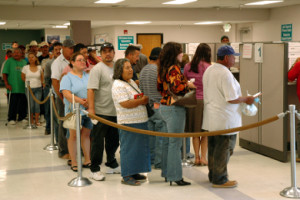 Hundreds of people who lost jobs when the freeze hit California Jan. 12-14, 2007, lined up at state Unemployment Development Department offices, including the office in the border city of Calexico, to register for the Disaster Unemployment Assistance program funded by FEMA. FEMA Photo by Michael Raphael

All this begs the question of how many people are really unemployed. The BLS June jobs report quotes an “unemployment rate…unchanged at 7.6 percent.” But what is that rate? To get it, you divide workers showing up at the unemployment office to get a check from the government, by the total workforce. Of course that rate will be low.

But at least some at the BLS have a conscience. They created “alternative measures of labor utilization.” In other words, other unemployment rates. Pay attention, at that link, to U-6. The BLS defines it thus:

In other words, U-6 re-counts as persons, those that the “unemployment rate” dismisses as unpersons.

And even so, “the civilian labor force” includes private company workers and government workers. “Civilian” merely means “non-military.” That leaves out the Army, Navy, Coast Guard, Marines, and Air Force. But it includes the cops, the faculty and (bloated!) administration in the public schools, and every government paper-pusher. Who pays all their salaries? The private-sector labor force.

The worst part of the unemployment story: fewer than half the civilian labor force is full-time. Ben Bullard, at Personal Liberty Digest, puts that into perspective:

Only 47 percent of employment-age American are working at full-time jobs. The rest? They’re all either working part time, or they’re not working at all.

How did this happen? For one thing, Obamacare pushes companies to replace their full-time staff with part-time staff – or turn them into rent-a-drones. (“Bumstead, you’re fired! Oh, wait – you’re with the temp agency, anyway.” Apologies to Chic Young.) But even without that, the economy is not big enough to support everyone anymore.

So much, then, for “stimulus,” which was not a stimulus at all, but a drug. As anyone with an ounce of understanding of economics, could have predicted.

So don’t let anyone tell you that administration policy has “improved” unemployment. If it has, then that’s only the sort of improvement that the late Richard A. Cloward and his widow, Frances Fox Piven, might appreciate.

Christie at bat: will he strike out?

The statement “Only 47 percent of employment-age American are working at full-time jobs” is completely and utterly false. They way this metric is derived is total full time jobs (117m) divided by total population between the ages of 16 and infinity (250m).

This statistic is only true if you consider every single human being alive in America over the age of 15 as “of employment-age”. That’s pretty untrue, isn’t it? Is a 95 year old man considered “of employment-age”? Is a high school sophomore required to have a full-time job?

Or maybe, if we’re talking about part-time jobs, shouldn’t we look how many part-time jobs there are? I would imagine we’re not talking about it because they’ve decreased by 2 million since the beginning of the recession, while full-time jobs have increased by 6 million? It’s also strange that you take one month of U6 going from 13.8 to 14.3 as proof of impending doom, yet when it decreased from 14.3 to 13.8 in March of this year, I heard no praises for our country’s improving job market. U6 is very volatile, but has consistently trended down (from a high of 18.0% to 14%) over the past 5 years, and a single month doesn’t undo this.

You can keep inventing weird, convoluted employment metrics, but they are all, at best, disingenuous, and at worst, lies. But the fact is; the number of full-time jobs are increasing, and U1-U6 are decreasing. The job market is improving, and I, for one, am cheering on America. I’d like you to join me.

Where do your statistics come from? Organizing for Action, maybe?

I remind you that the retirement age of 65 goes back to the Roosevelt era. He set the age at that level because most folks didn’t even live that long. The equivalent retirement age today would be 100.

Don’t ever expect me to cheer the strategy of the late Doctor Cloward or the still-very-much-alive (more’s the pity) Doctor Piven.

Everything I stated comes directly from the BLS’s Employment Situation report; not everything need be a partisan spin, especially with data so incredibly prevalent and available. I suggest you give it a read, there is a lot of interesting stuff in there.

You can find information on the increase in full-time jobs and the decrease in part-time jobs on page 20. On page 4, you’ll see how the bogus 47% is calculated, by taking “Employed” divided by “Civilian population”. Of course “Civilian population” is every single non-military human being in America older than 15; not a great denominator when measuring employment trends.

I didn’t quite understand your final comment. The jobs market is trending better, by all logical and accepted metrics. Is that typical of Cloward/Piven?

And finally, I agree with you that Social Security and Medicare are the largest and most unfair wealth transfers in the history of government, and, being a young person whose money is being redistributed to the most wealthy group of people in the history of the world, I would welcome any efforts to curtail or stop them. But if you’re argument is that people ages 65-100 should have the same rate of employment as someone 35 years…I’m afraid you have a large culture fight on your hands. But I really do wish you all the best in getting those lazy moochers off their butts.

Well, Ben Bullard read the June jobs report, too. So did I.

I think this proves, once again, an old maxim about figures not lying, but liars figuring. Said liars, in this case, coming from the administration. We have already seen, in the IRS, “careerists” turning partisan. Why shouldn’t we assume something similar at the Bureau of Labor Statistics?

One of two things are true:

The BLS is lying about the job numbers, and then the entirety of this article is wrong (garbage in, garbage out). Why cite the employment-ratio that you believe is falsified? It is then on you to provide alternative measures and data sources to back up the claim that “unemployment is as high as ever”. Gut feelings don’t count. Data count.

Or, the BLS is not lying, and then numbers and figures you use in this article are intentionally misleading at best.

No matter what, there is nearly nothing in this article that makes sense. As you said, numbers don’t lie, but liars use numbers. Either you or the BLS is the liar here, and I can very easily look at the BLS’s cross-tabs, methodology, and raw data…