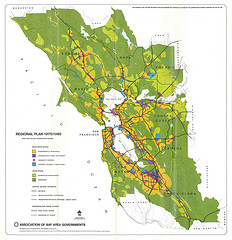 Here’s a test. Think of a regional sustainable development plan that does not include open spaces, compact living and reduced vehicle miles traveled. From Plan Bay Area in San Francisco, to New York’s Capital Region Sustainability Plan the programs are the same.

Most of the plan elements are requirements communities must advance in exchange for accepting federal grant money. HUD’s euphemistic “livability principles” are nothing more than forced centralized planning. Regionalism, with its unelected boards and autonomous planning authority, are the 21st century version of “collectivism.”

As community members see their choices are dwindling, planners resort to ever more deceptive practices. In creating a recent DVD on planning, I exposed several of the tricks planners use.

Since most people want to be ‘healthy’ and ‘sustainable’, subconscious support is created for the plan with little understanding of the long-term consequences.

J. Gary Lawrence, a Smart Growth advisor to Pres. Clinton, said, we must “change community decisions about what can or will be discussed and who has a right to be at the [planning] table.”

Andres Duany, one of America’s leading planners said in 2012:

We don’t need to have more public meetings… Just pass [our Florida Seven 50 Regional Plan] and trust us.

The industries’ top planners are on record saying, they want to decide what will be discussed, and who will be at the table. Community members are expected to “just trust” them.

One training organization that develops communications programs for groups including federal agencies and land trusts, recommends the following model to change community behavior.

Many planners use similar tactics. The problem is, most community members do not realize, they are being set up as targets.

While planners speak of community engagement, rarely do enough residents participate to justify implementing the sweeping changes of comprehensive plans.

In July of 2012, the NY Capital Region Sustainability Plan conducted three visioning meetings drawing a total of only 150 people from a region of over 1 million residents. (.0002%)

In one approach, facilitators praise responses that advance their plans, while marginalizing those that do not.

Tactics include ignoring critical questions and trivializing those who offer oppositional responses. If opposition persists, the attendees are dispersed into smaller groups to separate the dissenters.

Many surveys have such low participation rates they lack the sampling necessary for validity. But, that doesn’t stop planners from promoting the information.

One Capital Region Plan survey claims 76% of respondents want Green Infrastructure. But, of the 1 million residents affected by the plan, just 96 answered the survey question. (.0001%)

In another tactic, survey questions are worded in ways that promote only the responses the surveyor wants.

A 2010 planning survey for Carver, MA, asked residents, “Which of the following do you feel should be protected or acquired?” It then listed items including waterfront land, farmlands and more.

When respondents chose one of the items,it automatically constituted a vote in favor of public control of property. Residents were offered no option for rejecting public land control and were not informed of the long term consequences of ‘protecting or acquiring’ land.

They did not reveal that the same study showed over twice as many people preferred suburban to city living, and chose single detached homes over the compact units used in Smart Growth.

The statement is actually a misleading excerpt from the Transportation Research Board’s report, “Driving and the Built Environment”. California failed to mention the report’s own conclusion that researchers “lacked enough verifiable scientific evidence to support” their recommendations.

Verifiable evidence was available, however, from UK and Australian studies which each found GHG emissions were higher in the very compact living areas California is deceptively promoting.

Most planners do not set out to deceive people. The problem is, they cannot implement sustainable development, nor advance the government’s “livability principles” unless they re-engineer lifestyles, and foster plans that can infringe on property rights. People are beginning to realize that.

That is why sales tricks are necessary.

Wooing Wyoming – for Muslims and Islam