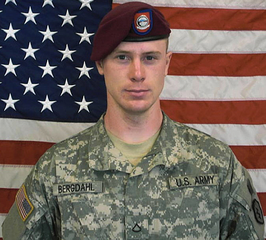 Private, now sergeant, Bowe Bergdahl was never any prize. He deserted his post at least twice before finally walking off his post and into the arms of the enemy. His teammates have said after his capture, roadside bombs were suddenly more accurate than ever. Before leaving the base, he sent all his belongings home. He then sent an email saying he would like to renounce his citizenship and join the Taliban. Witnesses heard him asking in English where he could find Taliban people. And from recently declassified documents, we now learn he converted to Islam while he was “in captivity.”

Actually, even the public knew he was a Muslim convert back in 2010. James Rosen’s secret documents (see link above) confirm this 2010 article from The Daily Mail (London, UK). The Mail quoted this Taliban boast: Bowe Bergdahl not only converted to Islam but also taught them how to make bombs.

De facto President Obama cannot help himself by telling us he didn’t notice. Why not? Because it’s his job to know. Every Republican, and a significant number of Democrats, know this. They express outrage that Barack Obama did not follow the law he signed. That law says he must at least let Congress know thirty days ahead of time before spending any money to move a prisoner out of Camp Delta at the Naval Base in Guantanamo Bay, Cuba. In fact he’s done worse than that. He materially aided the Taliban, by releasing their  whole war cabinet. That would be bad enough. But to do it for a deserter, and worse yet, a convert and collaborator?

The outcry, in public and in Congress, gets louder with every passing our, or so it seems. Rudy Giuliani told Newsmax this outcry has the White House in a panic.

But Barack Obama does not apologize for, as he put it, seeking the release of Bowe Bergdahl. He repeats the line that Bowe Bergdahl was in declining health.  Anyone watching the video footage of his handover to the Army, knows that is false.

But he is not content with releasing five valuable prisoners to get back a man of questionable loyalty. Now he seeks to turn over another prisoner, and ask nothing in return. Only the threat of impeachment keeps him at bay. For now. (Senator Ted Cruz, R-Texas, plans to introduce a bill to forbid Obama to hand anyone else over.)  But nothing stops him, or his apologists, saying anyone who disagrees with him does so because they hate Barack Obama. Furthermore they say Bowe Bergdahl’s fellow soldiers are lying. They even say they are psychopathic.

No soldier left behind?

Obama says he is observing the American tradition of not leaving a soldier behind. Why, then, does Marine Sergeant Andrew Tahmooressi still languish in a Mexican prison? Sergeant Tahmooressi did nothing more serious than make a wrong turn. But he is still in prison. Bowe Bergdahl is out of prison,  if he was even in prison when he was supposed to be in Taliban hands.

Worse yet, he has set a dangerous precedent. The going rate for ransoming an American is now five captured militants. How many more American soldiers will the enemy take by force? And why would they stop at taking soldiers? Would they not take any American tourist foolish enough to travel in a Muslim country? Might they even try to take an American tourist in Israel, as they did in the Black September incidents (Dawson’s Field, etc.) and for years afterward?

Again, it’s Obama’s job to know what his acts imply. If any doubts remain, the elder Bergdahl actually said a Muslim prayer at that White House Rose Garden ceremony. He was not merely using the Arabic name for God. The form of that prayer clearly came from Muslim tradition.

So what end does Obama really serve? It’s time for the House Committee on the Judiciary to meet and consider that question directly. Lieutenant Colonel Allen West, US Army (retired), called for the impeachment of Obama as President. Judge Andrew Napolitano, formerly of the New Jersey Superior Court, did the same. Only in a formal hearing, with subpoena power, can any House Committee hope to learn to what end Barack Obama brokered a bad deal for Bowe Bergdahl.

It’s one finger in America’s face after another by the criminal White House ID fraud occupier. It’s my hope and prayer that the good Lord have mercy upon this United States and that He will speed not only his permanent justice upon those in big government who have dealt treacherously, but that we soon will see some temporal justice served upon those who hate traditional, patriotic and Constitutional America.

Obama Qualifies For The Hangman’s Noose: His Latest Treasonous F You To America

Obama Qualifies For The Hangman’s Noose: His Latest Treasonous F You To America » moralmatters.org

“Why, then, does Marine Sergeant Andrew Tahmooressi still languish in a Mexican prison?”

Because he’s not being held by the enemy. He’s being held for violating Mexican gun laws.

As for Bergdahl, getting him back was worth doing. Now that he is back he should be court-martialled for desertion and jailed for a very long time.

And you accept the official account that he deliberately sought to violate those laws?

He took a wrong turn. That could happen to any U.S. citizen.

“He materially aided the Taliban, by releasing their whole war cabinet.”

“And you accept the official account that he deliberately sought to violate those laws?”

I have no idea; I don’t know what border crossing it was, so I haven’t studied the road layout. However if it was the one on I-5 then no, his story is not credible.

It seems odd that he didn’t U-turn before the border post though.

Personally I think the Mexicans should let him go, because unless they have hard evidence that he was planning something criminal in Mexico – which I doubt – there’s nothing to be gained from prosecuting him. However the more fuss the USA makes the more likely they are to dig their heels in to avoid any perception of being bossed around. This is best handled quietly, and in any case none of this changes the fact that he’s not being held by an enemy.

What it does show is that, for all his family and the rest of us do or can know, the administration of (de facto) President Barack H. Obama does not care whether Staff Sergeant Andrew Tahmooressi USMC lives or dies.

As nobody’s talking about sentencing him to death, that’s just hyperbole. His situation, unfortunate as it is, has nothing to do with the fact he’s a Marine. He’s been arrested in a foreign country for breaking the law. It’s happened to me as well. I didn’t expect my government to rescue me just because I had three stripes on the sleeve of the uniform I wasn’t wearing at the time; I apologised, paid the fine and went home.

He’s tried to do that and it hasn’t worked.

“He’s tried to do that and it hasn’t worked.”

Presumably because entering Mexico with an assault rifle is somewhat more serious than driving at 94mph on a Belgian motorway. In any case what he actually tried to do was escape from prison, which I find law enforcement people generally frown upon.