Michael Gungor answered his critics yesterday. In Relevant magazine he pleaded for unity of the Church. He also denounced those who called him apostate, blasphemer, heretic, false teacher, etc. over his belief in evolution. But in so denouncing, he left out the most inflammatory words he earlier used. And he failed to address the heart of the matter. He failed to address the sad and sore mistakes he makes in reading the first eleven chapters of Genesis.

What does Genesis tell us, that so moved Michael Gungor to dismiss it as mere poetry and not history? Why did he call some of his fellow Christians obscurantists for taking God at His Word?

God created the heavens and the earth. He began with a formless and empty shape made of water, gave it light, and separated light from darkness. He formed a boundary layer within that water and molded that layer to form dry land. He planted that land abundantly with herbs, fruit trees, and all other kinds of plants. He formed the stars, set them into precise patterns, and stretched out the sky “like a tent” to the far reaches of the universe. Lastly He populated sea, air and land. His most magnificent and intricate creation: man, the one creature with a mind.

But man fell from that grace in which God created him. He sought mastery, because he was not content with living in paradise. God expelled man from paradise to stop him from eating a tree that would make him live forever after, separate and apart from Him.

The first man, Adam, had two sons. But one murdered the other out of jealousy. Adam had another son in the dead son’s place. From that son sprang a line of patriarchs. Their names, taken together, spelled out a prophetic message.

But sin multiplied in the earth. Eventually every thought of man was “only evil continually.” So God gave warning to one man and ordered him to build a ship on dry land. Why? Because the earth would soon suffer a truly violent event. And everything that lived and breathed on land would die, except the humans and animals that would ride on that ship.

That event happened. We call it the Global Flood. Every earthquake we have since felt is an aftershock of that Flood. The magnificent chalk cliffs of Dover, and all the layers that lie buried beneath the layer those cliffs represent, all settled during the Flood.

After that, men started to gather in one place, speaking one language and all the same words. In their pride they sought to reach heaven with something they built with their hands. So God made sure they would scatter. 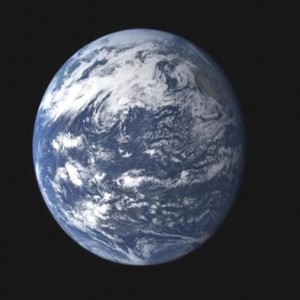 He assumes Moses simply wrote an epic poem about how the world and mankind came to be. He refuses to accept Noah or Adam as historical figures. He first said that two years ago. And he put belief in a literal six-calendar-day creation on par with belief that Nicholas of Myra lives today as a God-substitute, distributing toys to the children of the world every year on Christmas Eve.

I have no more ability to believe, for example, that the first people on earth were a couple named Adam and Eve that lived 6,000 years ago. I have no ability to believe that there was a flood that covered all the highest mountains of the world only 4,000 years ago and that all of the animal species that exist today are here because they were carried on an ark and then somehow walked or flew all around the world from a mountain in the middle east after the water dried up.

What upset his listeners most was when he suggested Jesus might have been wrong – to say the least mistaken, and to say the most perjurious – when He referred to Adam and Noah as historical figures.

Ken Ham at Answers in Genesis published an immediate answer. Walter T. Brown, of Hydroplate Theory fame, gave an interview to your correspondent (publishing as the Creationism Examiner) last month. Both had plenty to say about the mistake Michael Gungor made in dismissing Genesis as non-literal. Brown especially noted this: Jesus refers to Moses as a prophet. Prophets do not write falsehoods. Therefore Genesis chapters 1-11 tells the truth as accurately as does the rest of Genesis.

And after that, Michael Gungor went on the offensive. He hired the public relations firm of Frederick and Associates. Those worthies contacted your correspondent, among others, directly to protest what I and others had written. By the way, I stand by what I wrote and by what Walter T. Brown told me.

The essay in Relevant accuses Genesis-believing Christians everywhere of calling Michael Gungor several unflattering names. “Apostate,” “blasphemer,” “heretic,” and “false teacher” are the four mildest examples. Michael Gungor even accused someone of calling him a twofold son of hell, and a fool leading thousands to hell.

But Michael Gungor has one small problem.

Michael Gungor has no evidence

No Internet engine search can find one essay using such ungentlemanly language to describe Michael Gungor.

If you decide that you’re going to undercut biblical authority when it comes to very clear historical claims that you say now have to be reinterpreted by the assured findings of modern science, then when it comes to any other issue, if you fail to follow those same, naturalistic assumptions, you’re just being arbitrary. It may not be that you will also deny all those other doctrines that run into direct conflict with the naturalistic, scientific worldview. But if you do not do so, it will simply be because you decided not to do so, not because you are consistently recognizing an intellectual authority, and that’s exactly what the Scripture claims to be.

Mohler was talking about Michael Gungor’s denial of Creation and the Global Flood, contrasting with his acceptance of Jesus Christ’s mission, Passion, and Resurrection. But Mohler used no ungentlemanly language there.

Nor, again, did any other person willing to speak for publication and attribution. The most Michael Gungor has to complain of, if anything, are childish snipes he says he heard. He cannot even prove anyone ever spoke to him in that fashion. (If Frederick and Associates think they can prove it, let them share their evidence, direct or circumstantial.)

It’s understandable for the violinist to get a little frustrated at the timpani player for playing louder than the dynamic marking on the page dictates. But friction and division are not the same thing. There is a big difference between “you’re not doing your job well enough!” and “I’m not playing on the same team with him anymore!”

So Michael Gungor now compares himself to a drummer beating his drum too loudly. But in denying Creation and the Global Flood, Michael Gungor does worse than that. How if the drummer started beating not only too loudly, but out of time with the conductor? How if the violinist started hitting sour notes? How if any member of the orchestra brought in his own score and arbitrarily decided he would play according to the conductor’s copy in one place and his own in another? What conductor would stand for that sort of behavior? What audience could he expect to appreciate the finished performance?

All this, however, strays from the heart of the matter. Michael Gungor correctly observes that Genesis has many poetic elements. (One often loses many other elements in translation.) But he incorrectly infers infidelity to truth from poetic form. A poem can still tell the truth.

Furthermore, abundant evidence now exists to validate the Global Flood, and the span of time since then. I myself, in collaboration with Dr. Brown, have validated the recency of the Global Flood. Michael Gungor, and the worthies at Frederick and Associates, can review our material any time. We therefore have no reason to doubt the truth of the Global Flood account. And if Moses described the Global Flood correctly, he described Creation Week accurately as well. Especially if one can legitimately call him a prophet.

In sum: Michael Gungor wrongfully throws off on people. He recasts argument against his stance as an argument against him personally. And he has this argument to begin with, because he makes a serious error of judgment. He accepts as fact a theory of origins grounded in atheism. That theory does not explain observable fact nearly as well as some have led him to believe.

Reprinted and edited from examiner.com

[…] and edited from examiner.com and from Conservative News and […]