The year 2014 saw great strides in understanding how God created the world, and how the Global Flood created confusion as well as judgment. This year also saw controversies that moved the creation debate out of obscurity and even caught mainstream press attention.

Advances in the creation debate

2014 began with an important benchmark on what the public thought about the evolution-creation debate. The Pew Research Center published its survey on “public views of human evolution.” According to Pew, 33 percent of all Americans believed humans have not changed much since their beginnings. And of the 67 percent who believed humans have changed, nearly half felt God helped guide that change.

Within days, Bill Nye “The Science Guy” and Ken Ham, head of Answers in Genesis, announced a debate on this question:

Resolved: that creation is a viable model of origins in today’s modern scientific world.

That debate took place on February 4, 2014. Ken Ham’s Creation Museum hosted it. The  two men fought each other to a draw – or a double default. But Walter T. Brown Jr., of the Center for Scientific Creation, found some reason to cheer. He suggested the Bill Nye/Ken Ham event “moved the creation-evolution debate from the back burner to the middle burner.”

Before February was out, Ken Ham announced he had finally secured the funding he needed to move forward with another great demonstration project. He and his partners will build a full-scale concept model of Noah’s Ark, and will build a theme park – Ark Encounter – around this. Update: two weeks ago, the government of Kentucky reneged on an earlier promise of sales-tax incentives for the project. Ark Encounter, LLC will take legal action and ask a judge to restore the incentives. But will they even need them? The publicity might help them raise enough funds to make up for not having them.

But the creation-evolution debate created more legal controversy earlier in the year. A scientist lost his job after reporting a discovery that casts doubt on the “billions of years of Earth pre-history.” Specifically he found soft tissue, including identifiable remains of osteocytes, in a sample of a Triceratops horn. The journal Acta Histochemica published his find. Within days a superior officer roared at him,

We are not going to tolerate your religion in this department!

At last report, Mark Armitage, the scientist who lost his job, was still litigating the firing.

September brought two controversial announcements, one concerning the creation community, the other from a nominal Christian. Bob Enyart, at Real Science Radio, released a documentary: The Global Flood and the Hydroplate Theory. He did not mince words. He made plain why so many in the creation community objected to the Hydroplate Theory of Walter T. Brown (see above). Brown had, early in the history of the movement, denounced the Canopy Theory of Isaac Newton Vail as unworkable and relying too much on miracles.

Those events created great shocks in mainstream media and in Christian circles. Sadly, this caused people to miss the meaning of even more shocking events. Observations, mainly from astronomy, came in that vindicate creation science in general, and the Hydroplate Theory in particular.

On January 23 came this article in Nature: the dwarf planet Ceres has abundant water vapor gushing out of two geysers in its middle latitudes. That Ceres should have any such source defies convention. But the Hydroplate Theory can explain it easily. According to it, the Global Flood ejected enough water, rock and mud to form the meteoroids, comets, and asteroids of our solar system. 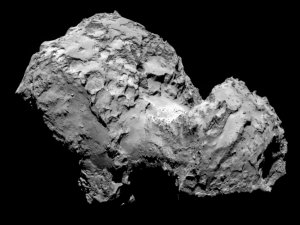 Comet 67P/Churyumov-Gerasimenko by Rosetta’s OSIRIS narrow-angle camera on 3 August from a distance of 285 km. The image resolution is 5.3 metres/pixel. Photo: ESA/Rosetta/MPS for OSIRIS Team MPS/UPD/LAM/IAA/SSO/INTA/UPM/DASP/IDA

And, as Brown would realize two months later, the Trans-Neptunian Objects! On March 27 this letter appeared. It announced a companion (2012-VP113) to the far-off dwarf planet Sedna. In that same issue, astronomer Megan Schwamb pointed out a finding too striking to be coincidental. The twelve largest TNOs, including Sedna and 2012-VP113, have identical arguments of perihelion. Schwamb herself said any theory of origins of these objects must account for this. So Brown would announce a radical new understanding of the violence of the Global Flood. Incredibly, the Flood launched three percent of the mass of the earth to form all the “mavericks of the solar system.”

The hits kept on coming. In August came this announcement from ITAR-TASS: two cosmonauts aboard the International Space Station took swabs from the porthole of one of the two oldest  of its modules, specifically Zvyesda. Those swabs held sea plankton. Could any modern launch have carried those sea plankton aloft? Impossible. Those plankton must have lingered from the Global Flood days.

A month later came this letter in Nature: a Chinese-American team found fossil embryos showing clear evidence of “late” development. And they found these in pre-Cambrian rock.

Then came the landing of the spacecraft Philae on Comet 67P/Churyumov-Gerasimenko. Sadly, Philae landed with its solar panels in shadow. But before she went to sleep, she sent back volumes of data, more than any earlier rocket probe has ever sent back from a comet. In his own year-end retrospective, Brown noticed two key points:

This direct measurement of deuterium on Comet 67P, and in such concentration, clearly negates the notion that comets brought water to earth. The methane suggests the comet, and perhaps all comets, have life on them. This life came from earth, as the comets themselves did.

2014 was a very good year for the advance of creation science. It produced the best scientific evidence yet found. This evidence vindicates the Global Flood and cast serious doubt on conventional theories of the origin of the earth and the solar system. The debate will take time to catch up with the science. But now more people are paying attention to it. And that could not come at a better time.

Just for my own amusement, some corrections and clarifications:

Kentucky withdrew its tax incentive offer after AIG/Ark Encounter stated that it planned to discriminate in hiring for Ark Encounter positions based on religious belief.

Mark Armitage did not claim to find live osteocytes in a Triceratops horn; he claims to have found unfossilized soft tissue there.

Out of curiosity, Dr. Brown says that 3% of Earth’s mass formed the asteroid belt bodies, TNOs, and presumably Pluto and some of the Jovian/Saturnian satellites. Does that lost Earth mass also explain the arrival of Comet ISON, which he claims is the comet of 1680 returned thousands of years early? Or is that due to some other unknown mass?

The press release from ITAR-TASS in August was so vague that I’m surprised you use it as support for anything. “Could any modern launch have carried sea plankton aloft? Impossible.” you say, with no justification as to why. Resupply flights to ISS have repeatedly launched from coastal regions since the first Shuttle launch to ISS in 1998. Add in the already-mentioned well-publicized leaks from the station interior and the frequent EVAs that have taken place and there are plenty of sources of contamination – not that we even know what the Russians are claiming to have found, mind you. “Plankton” is about as specific as “land creature”. Besides, experiments meant to examine just what is floating around in LEO have already been done starting back in the 1970’s, and haven’t come up with any similar evidence.

Never mind why Kentucky withdrew that tax incentive offer. They had no procedure for such a withdrawal. They know what they were getting into when they tendered the offer to begin with. I smell selective application of tax law, and a reneging on a promise for which the law does not provide.

Well, I suppose it’s going to be a matter for the courts then. I would be interested to hear if there are other for-profit organizations that you know of that are allowed to discriminate in hiring based on religion, much less do so and receive state tax subsidies.

The matter will indeed go to court. This will be another Hobby Lobby-like case, or close to it.