Recently, I spoke at a tea party in the state of Minnesota and was approached by an individual who said that he was there when I gave “The Prayer that Rocked the Capitol.”

So where were the cowards?

I asked him where all of his conservative buddies were that did not stand when they should have stood. I told him the self-proclaimed conservatives in Minnesota were, and are, nothing more than a bunch of spineless cowards and capitulators who have no business attempting to represent anyone.

By the looks of the best that we have in Minnesota, I can understand why the communist reprobates and leftist criminals are so encouraged to commit crimes against “we the people.”

Now, let me set the stage for you here: In May 2011, I was asked to give the opening prayer for a session of the Minnesota House of Representatives by Rep. Ernie Leidiger, R-District 47A, which we accommodated.

As I entered the Capitol chambers, I was introduced to the speaker of the House, Kurt Zellers, as “the guy that gets things done around here.”

Before my prayer, I had asked the chaplain if I could provide a preface to my prayer to bring understanding by using an analogy. He approved, and off I went to the podium to give up my heart to God and to man (1 John 5:2).

Here are the remarks and the prayer:

Right after I was done praying, one “Christian” chaplain came up to me and did his best to reprove me for using the “J” word (Jesus) in the House chamber, as if to suggest that I check my faith at the door before calling upon the God who gave us government in the first place (Exodus 18:21).

Apparently, he had been around enough whores and hirelings to believe that I was to follow in close pursuit. What a fool. I will never, by the grace of God, ask for permission from corrupt man to obey a just and holy God (Acts 5:29; Matthew 10:33).

Also, keep in mind that after this prayer was over, there were over 2,000 outlets that reported on it within 10 minutes.

First, I was labeled the “anti-gay preacher.” Then I was called the “bigot.” And then when the people figured out that I said nothing about homosexuality, they then tried to figure out why there was such an uproar over my prayer.

This worked out well because it exposed the state-controlled media for who they are and how they operate (Proverbs 26:27; Psalm 7:15).

I respectfully apologize to all members in the Minnesota House of Representatives and all citizens of this state for today’s morning prayer. As speaker of the House, I take responsibility for this mistake. I am offended at the presence of Bradlee Dean on the floor of the Minnesota House of Representatives. I denounce him, his actions and his words. He does not represent my values or the values of this state. 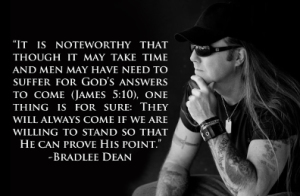 “In my 30 years in the House, I have never seen such a hateful person be allowed to deliver the opening prayer,” said Rep. Clark.

“The Republican leadership should be ashamed of themselves. It reveals the underlying hateful nature of the anti-gay constitutional amendment movement,” said Dibble. “In this time of divisiveness, it’s disgraceful and appalling to see the speaker of the House of Representatives, the body that is supposed to represent all Minnesotans, invite hatred into the opening prayer. Instead of providing a message of inclusion and hope, the House began this day with hate and discrimination.”

“This morning’s action is a sad commentary on House Republican leadership’s apparent ambivalence for supporting the equal rights and beliefs of all Minnesotans,” Dibble added.

Going back to the beginning. Consider now that I had asked the man who had approached me where all of those cowards that failed to take a stand are today. He answered me and said that they were “no longer in office.”

It is noteworthy that though it may take time and men may need to suffer for God’s answers to come (James 5:10), one thing is for sure: They will always come if we are willing to stand so that He can prove His point.

By the grace of God