Left to himself, man is half beast and half devil.

Just this week, we heard of a grisly killing in Mississippi where Jessica Chambers, 19, went to clean her car and get something to eat. Shortly thereafter, Jessica was found walking down a rural road on fire. Ninety-eight percent of her body was burned, all but the bottom of her feet. She had been beaten, doused with lighter fluid and set ablaze. She later died in the hospital.

Or just when you think that it could not get any worse we have Gregory Graf shooting and killing his stepdaughter, 33-year-old Jessica Padgett, a mother of three. Graf raped her dead corpse and then buried her in his backyard.

It was reported that Graf couldn’t face the death penalty because Jessica was dead when he abused her sexually. Anyone in his right mind would believe that would be more of a reason to give him the death penalty, but not in America.

Even worse is that the supposed justice system (a $64 billion a year moneymaker and producer of slave labor) in this country will show more compassion on the criminals than the victims.

The American people will stand down and allow those who are supposed to administer justice to aid those that commit such crimes by simply looking the other way when justice should be demanded.

Godlessness lets such horrific acts and non-response go on

I can hear someone say, “This has been going on for years.” True that! But the fact of the matter is that the American people have not put a stop to it. And crimes are becoming more heinous. Why? It’s because soft judges produce hardened criminals. Oftentimes leniency will encourage the crime (showing mercy to the unrepentant).

Remember that love is the fulfilling of the law. Because you love people at large, it is then a mercy to bring forth judgment because it protects the innocent (Romans 13:8). Friends, “love worketh no ill” (Romans 13:10). Love owes the truth and the truth is what sets men free (John 14:6).

The older I get, the more I understand why God said, “An eye for an eye, tooth for tooth, hand for hand, foot for foot, Burning for burning, wound for wound, stripe for stripe” (Exodus 21: 24-25).

I have heard it said that an “eye for an eye” will leave the whole world blind. Nothing could be further from the truth. If you do not want to do the time, then I say don’t commit the crime.

We should expect that when a crime is committed, justice will not be delayed.

And he that killeth any man shall surely be put to death. – Leviticus 24:17

Don’t say to yourselves that love suggests a softness on crime as if to overlook judgment because of kindness. If that is the case, then love wounds itself by killing justice.

In America, crime is encouraged, contrary to God’s judgments. The criminal is allotted three crimes to be committed before America’s justice system deals with him. You know, three strikes and you are out.

Criminals commit the crimes. They are then thrown in jail for three square meals a day, education, recreation and all the while the victim is overlooked. All of this takes place on the taxpayers’ dime.

A godless nation-state becomes what God said it would become. 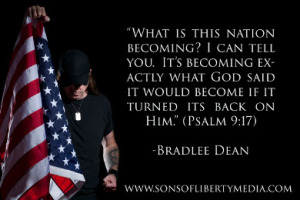 What is this nation becoming? I can tell you. It’s becoming exactly what God said it would become if it turned its back on Him.

The wicked shall be turned into hell, and all the nations that forget God. – Psalm 9:17

Men also fail to remember that their sins are before a holy and just God, who beholds the “good and the evil” (Proverbs 15:3). This is the God in whom “all things are naked and opened unto the eyes of Him with whom we have to do” (Hebrews 4:13).

And what cause soever shall come to you of your brethren that dwell in their cities, between blood and blood, between law and commandment, statutes and judgments, ye shall even warn them that they trespass not against the LORD, and so wrath come upon you, and upon your brethren: this do, and ye shall not trespass. – 2 Chronicles 19:10

So, what happens when these commandments are ignored? Take a look around and remember the words of the Lord.

Behold, I have taught you statutes and judgments, even as the LORD my God commanded me, that ye should do so in the land whither ye go to possess it. Keep therefore and do them; for this is your wisdom and your understanding in the sight of the nations, which shall hear all these statutes, and say, Surely this great nation is a wise and understanding people. – Deuteronomy 4:5-6

Whom do you fear? God or man?

Where are the cowards who hid after the Capitol prayer?

As a nation, unless we humble ourselves before God and ask for forgiveness our country is doomed.

This would be the same Leviticus 24 that commands us to put blasphemers to death along with murderers? What are your thoughts on that?

Jesus Christ superseded all such laws. Leviticus 24 was for a time when God, while still Unapproachable, manifested Himself right in the camp of Israel. Todayh He is far more Approachable than that.

“Jesus Christ superseded all such laws. Leviticus 24 was for a time when God, while still Unapproachable, manifested Himself right in the camp of Israel. Todayh He is far more Approachable than that.”

Oh gotcha, so we shouldn’t be executing murderers then, either, right?